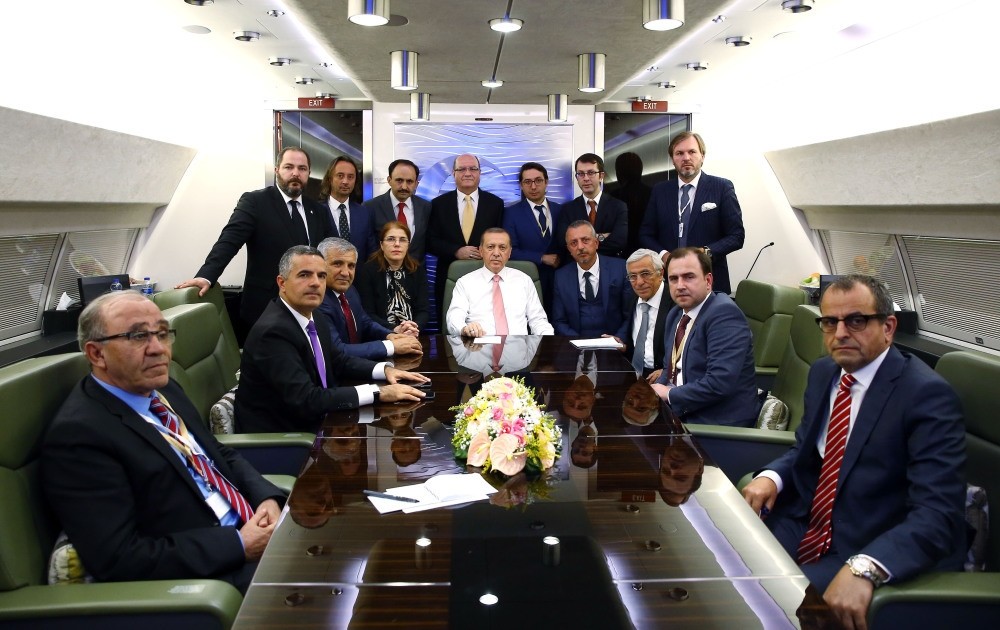 Commenting on the Yenikapı rally on Sunday at which 5 million people from different backgrounds gathered to show their support for democracy, President Erdoğan said the rally opened eyes in Turkey and around the world, adding that the U.S. should heed the expectations of millions of Turks and extradite FETÖ leader Gülen

President Recep Tayyip Erdoğan said Wednesday that Sunday's Yenikapı Democracy and Martyrs Rally in Istanbul had opened the eyes of many in Turkey and around the world, voicing his hope that the U.S would heed the call from the 5 million people at the rally and 10 million more who were on the streets demanding the return of Fethullah Gülen, the leader of the Gülenist Terror Group (FETÖ). Speaking to journalists acompanying him on his return flight from his crucial meeting with Russian President Vladimir Putin in St. Petersburg, Erdoğan said many people who attended the Yenikapı rally realized the extent of the threat posed by FETÖ on that day. FETÖ operatives in the military were the ringleaders of the July 15 coup attempt that killed 240 people and injured thousands.

"There were many people who were attached to FETÖ organizations in the past. They say, 'We had no idea what kind of person he was.' People are shocked by the identification of FETÖ operatives. Most see Yenikapı as a transcendent moment in the history of the country," he said. Many of the artists who attended the rally realized the danger on that day, Erdoğan said, calling on those who were deceived by Gülen's rhetoric to make donations and speak out. Erdoğan described the rally, which was attended by ruling party and opposition leaders, as a showcase of unity. "We hope the U.S. hears this voice and hands over this individual [Fethullah Gülen] as soon as possible. The necessary dossiers have been sent. I hope they don't make any excuses like it is hard to go through 85 boxes of documents."

When asked about Putin's take on the July 15 coup attempt, Erdoğan said, "He called me the next day. I can tell he was emotional. He told me the Russian government condemned the act the moment it was informed. He said, 'I had to call you before asking what happened. This is was our friendship obligates us to do."

Erdoğan said the meeting with Putin was planned early last month, with both sides desiring an immediate resumption of commercial ties. All ties between the two countries suffered after Turkish jets on Nov. 24 last year shot down a Russian one that violated Turkey's airspace. He described the St. Petersburg meetings as intense and productive and both sides intent on overcoming past issues to further boost commercial and diplomatic ties.

The two sides first discussed the outstanding commercial issues, including the Akkuyu Nuclear Plant that Russia will build and the Turkish Stream natural gas project. Erdoğan said Turkey had accepted the Russian request to designate the Akkuyu Plant as a strategic project, which will allow it to gain certain advantages. Ankara's request for the two sides to share ownership of part of the new pipeline passing through Turkey was accepted by Moscow, Erdoğan added.

"Another issue was defense industry cooperation, which I believe will progress significantly in the future. Meetings will be more frequent."

On the proposal to establish a joint investment fund, which will allow the newly founded sovereign fund of Turkey to cooperate with the already existing Russian counterpart to make joint investments, both sides reached an accord, Erdoğan said.

The president said the Russian side was also positive to reinstituting a no-visa regime with Turkey. "Our aim is not to return to the state of relations as it was before Nov. 24. I and Putin desire to go much beyond that," he said. He expressed his certainty that his meeting with Putin will be welcomed the world over. "Look at the level of the TL against the dollar. It fell below 3. We also talked with Putin about using our currencies for trade. If that happens, the dollar will depreciate even further against the TL. Both Russia and Turkey will win."

Erdoğan, when asked about Syria, where Russia is the biggest supporter of Bashar Assad's regime, said the Turkish side had presented its stance on Syria and proposed to send a delegation of intelligence, military and diplomatic officials, so that they can go through the issues with their Russian counterparts. "Our delegation is going there immediately. They will hold meetings on Thursday [today]. Our delegation will show that humanitarian corridors around Aleppo are not used for other purposes."

US AND EUROPE'S PERCEPTION

When asked how he thought his visit to St. Petersburg will be viewed from the U.S. and Europe, "What's important is not how it's perceived. What's important is how the meetings went. Were they productive?" he said. He also underlined his disappointment with the European response to the July 15 coup attempt, adding that he expected some leaders who made cursory phone calls to have made supportive visits to Turkey. "Only the British EU minister and the secretary-general of Council of Europe came."

He described European complaints over detentions of suspected coup plotters and other measures as "unjustified." This is no ordinary incident. What would have Italy done if its parliament had been bombed? What would have Germany done?"

The matter of the downed Russian plane had come up during the talks, Erdoğan said. "The Russian side argues that their first jet violated the airspace but the second one, which was shot, had not. We will send them the radar readouts.

Reports about FETÖ-linked pilots being responsible for the downed plane and the subsequent damage to Turkish-Russian relations were "premature," Erdoğan said, adding that it was true some of the pilots were arrested after the July 15 coup attempt. "But the judicial process is continuing and it is too early to jump to conclusions." "The Turkish national accused of killing the Russian pilot of the downed jet is detained for another crime. The investigation is continuing and we will closely follow all developments," the president said.
RELATED TOPICS