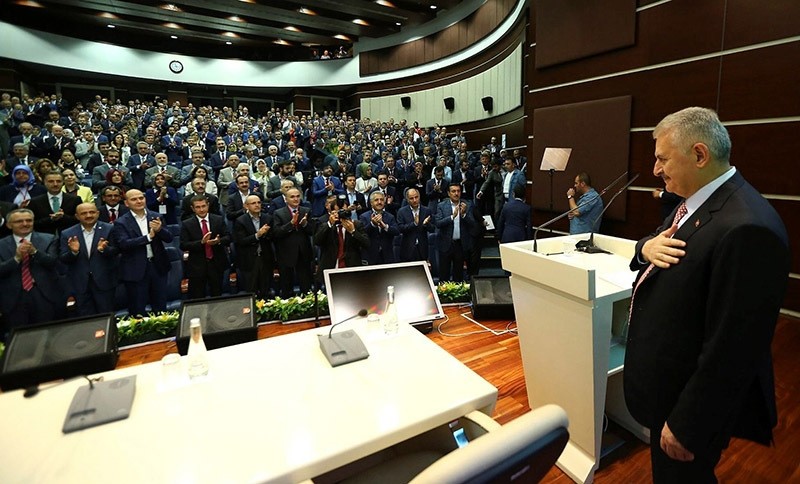 The ruling Justice and Development Party (AK Party) commemorated the 15th year of its founding on Sunday in a low key manner rather than hold celebrations due to the July 15 coup attempt by the Gülenist terror-cult (FETÖ).

Sunday's commemoration included a message from President Recep Tayyip Erdoğan by video link. Nearly 5,000 invitations were sent out for the event, including to former President Abdullah Gül and other senior AK Party figures and deputies, along with heads of provincial and district organizations. The party has also invited the families of those killed on July 15 as well as those injured on the night of the coup attempt.

Sunday's event began with a documentary showing the AK Party's 15-year political history. It then continued with remarks from the party chairman, Prime Minister Binali Yıldırım, at AK Party headquarters. Prior to his speech, Yıldırım met with provincial party heads behind closed doors.

Speaking to the party members and supporters gathered in front of the headquarters, Yıldırım said "15 years ago, our founding leader Recep Tayyip Erdoğan said nothing would ever be the same in Turkey again, and today, the Gülenist coup's defeat showed us that we have come a long way from that very point,"

"After thwarting many crises, plots, betrayals, the AK Party today is stronger than ever. We made Turkey a more peaceful, fair country and will continue to do so. During this process, we will cleanse terrorists out of the country and unify Turkey under one flag," Yıldırım said.

President Erdoğan also participated the event via video conference to address the crowd.

"On July 15, Turkey experienced the bloodiest plot in its history when a group of Gülenists used the army's tanks, fighter jets against the nation. The outcomes of this incident might linger for years but it is our binding duty to wipe out those terrorists," Erdoğan said.

Erdoğan told AK Party members that after the July 15, the party has the heaviest responsibility for each citizen regardless of which party they have voted for, reminding that the coup was not only directed to the government but the whole nation.

The president went on to say that nobody, including himself, could act like they did before July 15, the day he said Turkey was faced with the "most despicable threat in its history".

"We can no longer act like we did before July 15. None of us can, including me as the president," he said.

"In the same vein, the AK Party -- which has been governing Turkey for the past 14 years -- cannot act like it used to either," he said, adding that he believed the opposition parties also had the same understanding.

"I hope that non-governmental organizations, media, professional organizations, and all groups representing different dispositions and schools [of thought] also feel the same way," he added.

With the AK Party recently establishing a monitoring commission to rid the party of FETÖ members that may be in various party organizations, party spokesman Yasin Aktay told the media following Wednesday's Central Executive Board (MYK) meeting that the AK Party has already been combating the FETÖ since their Dec. 17 and Dec. 25 coup attempts. Aktay also said the AK Party aims to eliminate all suspicion within the party through its recent moves against the FETÖ.