Turkey lashes out at Swedish FM, Austria over ‘defamation’ 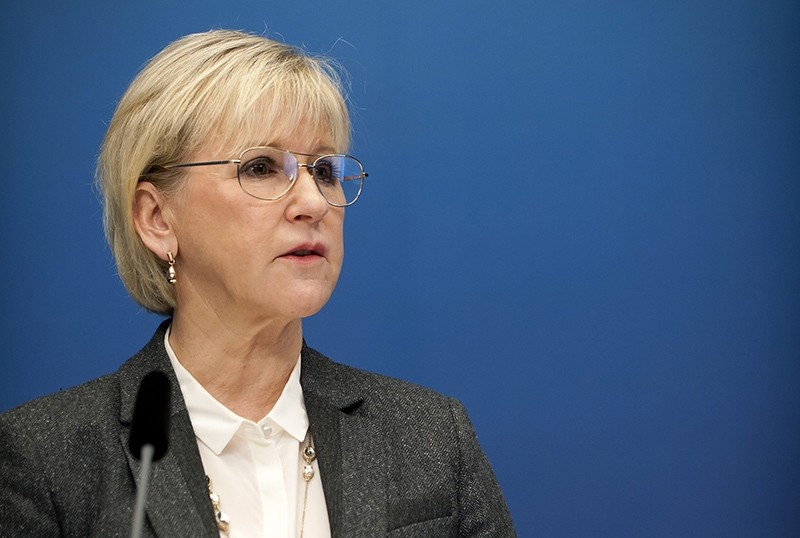 European anti-Turkish sentiment was revived with an allegation regarding child abuse, when Ankara complained about a sign at the Vienna airport in Austria and the Swedish foreign minister's comments.

Ankara is angry about a news update at the Vienna airport that displayed a statement that falsely claimed that Turkey allows sexual intercourse with children under the age of 15. The statement was removed following harsh criticism, and Ankara expressed it "disappointment and denunciation." A written statement from the Foreign Ministry said: "We deplore and strongly condemn that an international airport, located in the center of Europe and used by passengers from different countries, was abused by a discredited newspaper to spread irresponsible, distorted and falsified messages which defame a friendly country and the nation."

The Constitutional Court released late Monday a statement regarding the false claim. "The allegations are baseless," said the court in the statement after explaining the legal aspects of the matter. "Sexual intercourse with and abuse of minors under 15 continue to be classified as crimes under Turkish law," the statement added.

The news ticker is courtesy of Kronen Zeitung, an Austrian newspaper that was responsible for a sign urging people not to visit Turkey shortly after the foiled July 15 coup attempt, when the news update at the airport read: "Traveling to Turkey means you are supporting [President Recep Tayyip] Erdoğan." The statement, a quote from a story in Kronen Zeitung, was removed after the Turkish Embassy in Vienna complained.

Swedish Foreign Minister Margot Wallström faced criticism over her remarks on Monday. Deputy Prime Minister Mehmet Şimşek lashed out at Wallström for claiming that Turkey allows sexual intercourse with children. The Foreign Ministry summoned the Swedish envoy in Ankara to complain. Wallström wrote on Sunday on her Twitter account: "The Turkish decision to allow sex with children under 15 must be reversed. Children need more protection, not less, against violence, sex abuse." Şimşek responded: "You are clearly misinformed. There is no such stupid thing in Turkey. Please get your facts right."

You are clearly misinformed. There is no such stupid thing in Turkey. Please get your facts right. https://t.co/vrg9ybdsY0

Turkish decision to allow sex with children under 15 must be reversed. Children need more protection, not less, against violence, sex abuse.

Wallström received criticism from hundreds of Twitter users who criticized her for "spreading lies" and said Sweden should rethink her position as foreign minister.

Foreign Minister Mevlüt Çavuşoğlu also criticized Wallström's statement, saying that contrary to her claims, Turkey is taking action against child abuse. He said that he will call her to tell her that Turkey is concerned by such statements. Çavuşoğlu added that Turkey accepts criticism, but lies and slander should not be confused as criticism, and that such remarks reflect rising Islamophobia and anti-Turkish sentiment in Europe.
"It is a scandal for a foreign minister to post such a tweet based on false news or speculation."

The issue stems from a recent verdict from Constitutional Court that calls for different classification of prison terms for different age groups in cases of child sexual abuse.

Recently on Saturday, the Turkish Embassy in Vienna took action based on orders from Foreign Minister Mevlüt Çavuşoğlu to remove a live ticker at the Vienna airport displaying a provocative statement falsely claiming that Turkey allows sexual intercourse with children under the age of 15.

In Turkey, the age of consent is set as 18, in line with the Civil Code.

The Turkish Penal Code classifies any kind of sexual activity with minors under 18 who are unable to understand the legal meaning and consequences of such actions as child sexual abuse.