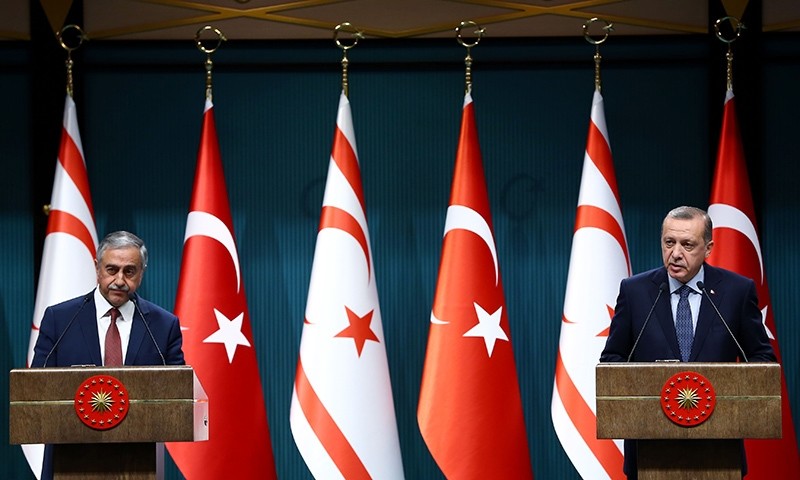 Erdoğan said Turkey "sweated and continues to sweat every effort" to find a fair and permanent solution to the Cyprus issue, during a news conference with Turkish Republic of Northern Cyprus' President Mustafa Akıncı late Wednesday.

"These efforts aim to establish a partnership with two equal communities that can live in the island, within the scope of UN parameters" Erdoğan said.

It is "obligatory" for Turkey to solve the Cyprus issue by providing "political equality" for Turkish Cypriot side and providing security and rights of the people, he said.

"Resolving the issue will contribute to the region's security, stability and prosperity," Erdoğan added.

Reunification talks between the Greek and Turkish communities on the island resumed in May 2015 and are expected to be resolved by the end of this year with the formation of a federal administration.

Turing to the Gülenist terror-cult (FETÖ) and its leader, Fetullah Gülen, Erdoğan said the group was recognized as a terrorist organization by the Turkish Republic of Northern Cyprus (TRNC) on July 21 and said FETÖ and its extensions "cannot find a way to live" in the TRNC.

"We hope this attitude will be seen as an example by other friendly countries," Erdoğan said.

Ankara accuses Gülen of masterminding the failed coup and has sent the U.S. two official requests for his extradition to face trial.

Gülen has lived in self-imposed exile in the U.S. since 1999.

The coup attempt left 240 martyrs in its wake and nearly 2,200 others injured.

Akıncı said Turkish Cypriots want a deal that will provide the fundaments of any nation.

"There will be a total of seven meetings between Aug. 23 and Sept 14. Feeling Turkey's supports gives us power. We will continue our way with your support," Akıncı said. "Hope we can achieve an agreement that includes three fundamental elements: Equality, freedom and security," he said.

"You showed a great example of leadership that night. We all saw that. Your leadership triggered a true patriotism of Turkish people," Akıncı told the Turkish leader.