Turkish border must be controlled by Turkey, US VP Biden says 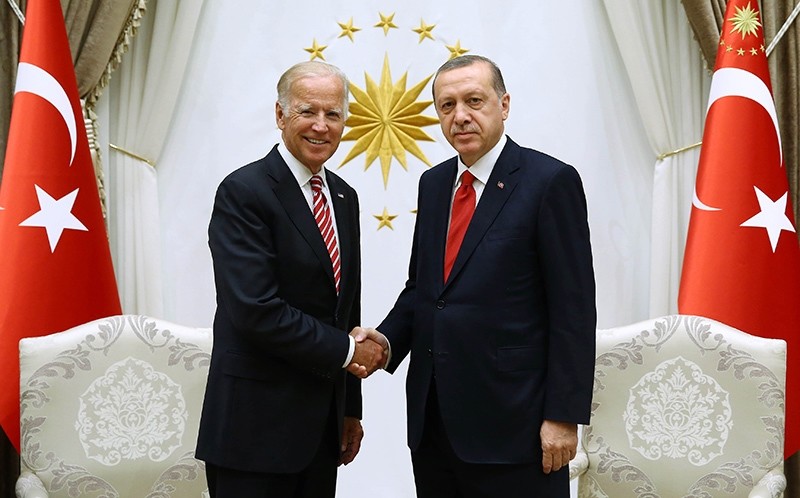 Turkey's border must be controlled by Turkey only, and there should be no occupation by other groups, U.S. Vice President Joe Biden said on Wednesday.

Speaking at a joint press conference with President Recep Tayyip Erdoğan at the Presidential Complex in Ankara following a 2.5 hour-long meeting, Biden reassured that the U.S. supports Syria's territorial integrity, shortly after highlighting that they also support Turkey's position regarding the existence of PYD along its southern border.

In response to Turkey's request to extradite Fetullah Gülen, the mastermind behind the July 15 failed coup attempt, who lives in self-imposed exile in the U.S., Biden said that the Obama administration does not have the power to fulfill that request.

"Only federal courts, not Obama administration, have power to extradite Fetullah Gülen to Turkey," Biden said and apologized to the Turkish people for taking so long to visit the country after the brutal July 15 failed coup attempt.

He highlighted U.S. support once again for the operation led by Turkey to liberate Jarablus from Daesh terrorists and said the U.S. commends the work of the Turkish army.

Biden praised Turkish people's bravery and commitment to democracy once again, saying that the world saw the sincerity of Turkish citizens on protecting democracy on July 15.

President Recep Tayyip Erdoğan told Biden that the US can at least detain Gülen, as prescribed by bilateral agreements between the U.S. and Turkey.

"According to the [1981] extradition treaty with US, we'd expect Gülen to be detained, however he still manages his terrorist organization freely" Erdoğan said and urged the U.S. to take necessary steps regarding the matter.

He also touched upon the importance of fighting terrorist organizations and said Turkey will never allow anyone to threaten its national security.

In response to a reporter's question which referred to Daesh as Islamic State, Erdoğan said that it is wrong to refer to them as an Islamic state.

"Islam is a religion of peace; it does not send children to blow themselves up as suicide bombers in the middle of crowds" Erdoğan said, and added that it is more politically correct to refer to the terrorist organization by Daesh.

Biden visited the bombed Turkish parliament earlier in the day and met Prime Minister Binali Yıldırım to discuss a number of issues, underscoring U.S.'s full support for Turkey's democratically elected government and praised the Turkish people for their bravery during the failed coup attempt.