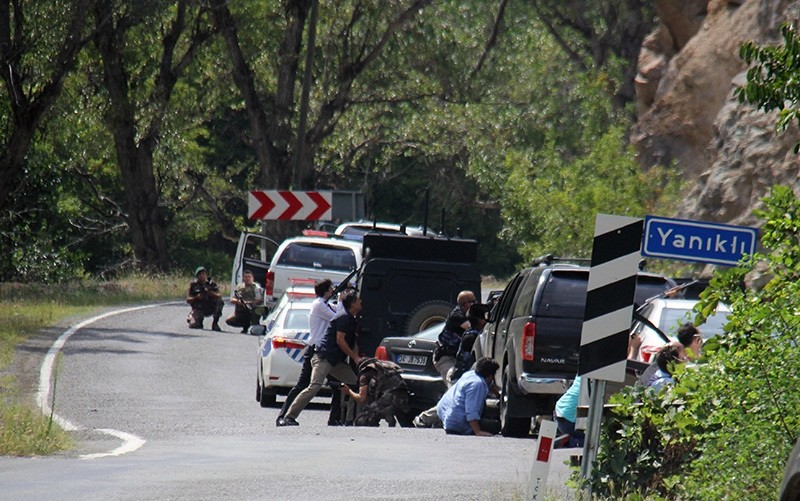 The convoy of main opposition Republican People's Party (CHP) chairman Kemal Kılıçdaroğlu was stuck in an armed clash between PKK and soldiers escorting the convoy in northeastern province of Artvin on Thursday.

Interior Minister Efkan Ala said that the attack has been carried out by PKK terrorists, and that security forces have launched anti-terror operations in the region.

He noted that helicopters have been dispatched to the area where clashes took place.

Ala also said that it does not matter who the terrorists targeted, and that it was an attack on all people, while he thanked Kılıçdaroğlu for his calm stance.

He noted that three soldiers have been wounded in the convoy attack, one of whom is in critical condition.

Later on in the day, reports said that the critically injured soldier succumbed to his injuries.

The CHP delegation and chairman Kılıçdaroğlu are unharmed in the incident, reports said.

Kılıçdaroğlu briefly spoke in a televised call on NTV channel and said that he and his delegation are doing well and that they are all safe.

Kılıçdaroğlu was initially kept in his vehicle as part of a precautionary measure against security threats, and was then transferred to a secure area with armored vehicles.

According to CHP sources, the convoy was not directly attacked but was caught between clashes on their way.

Later on, the Governor of Artvin Muhterem İnce was quoted as saying the clashes took place after security forces foiled a rocket attack attempt against the convoy.

Military helicopters have reportedly been requested to the region.

Early on Thursday, CHP Chairman Kılıçdaroğlu arrived in Kars province by plane and came to Artvin's Şavşat district with his convoy to attend opening ceremonies in the province.

Police is currently looking for the perpetrators of the attack.

Prime Minister Binali Yıldırım strongly condemned the attack, saying it was an attack against the democratic stability of Turkey.

Messages condemning the attack poured in, with many politicians including Foreign Minister Mevlüt Çavuşoğlu and Deputy Prime Minister Lütfi Elvan saying the attack targeted the democratic political system in Turkey as a whole.