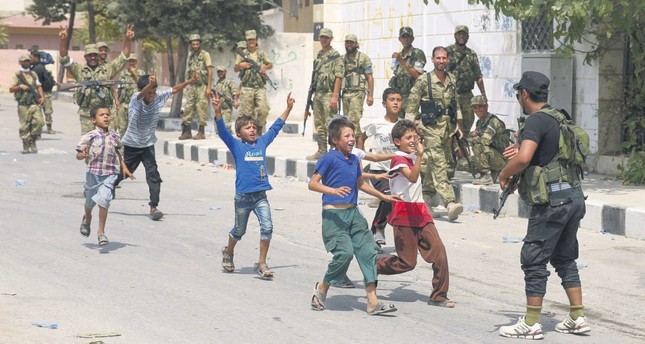 After the Turkey-backed Free Syrian Army (FSA) captured the key town of Jarablus in northern Syria and cleared DAESH from the area, arguments supporting the possibility of establishing a buffer zone in the area are starting to emerge.

Turkey has long-suggested the establishment of a buffer zone in northern Syria where refugees can be hosted while slowing the influx of refugees in Turkey. Despite Ankara's continuous appeal to the international community, the U.S. and the EU refused to adhere to the idea. Following the FSA's successful offensive in Jarablus, backed by the Turkish military, the town was cleared of DAESH and the area was designated a safe haven for refugees.

Burhanettin Duran, general coordinator of the Foundation for Political, Economic and Social Research (SETA), told Daily Sabah that Turkey has taken the first step by launching an offensive in northern Syria to establish a buffer zone. On Wednesday after much deliberation and many warnings from Ankara, Turkey embarked on an extensive cross-border operation with the FSA to eliminate the DAESH threat from a key area in northern Syria while preventing the People's Protection Units (YPG), the armed wing of the PKK's Syrian affiliate Democratic Union Party (PYD) from creating an independent state.

The collaboration of the Turkish Armed Forces (TSK) and FSA has become a source of hope for the Syrian people in the fight against DAESH. When asked how Turkey will effectively provide security for refugees in the buffer zone, Duran contended that Turkey may consult with the U.S. and Russia and act in coordination with those countries.

U.S. State Department spokesman John Kirby said in 2015 that the U.S. and coalition countries did not need a buffer zone in Syria and that imposing one would be conducted by Turkey unilaterally. It remains unknown whether the U.S. will deviate from its statements and support Ankara's plans to establish a safe zone.