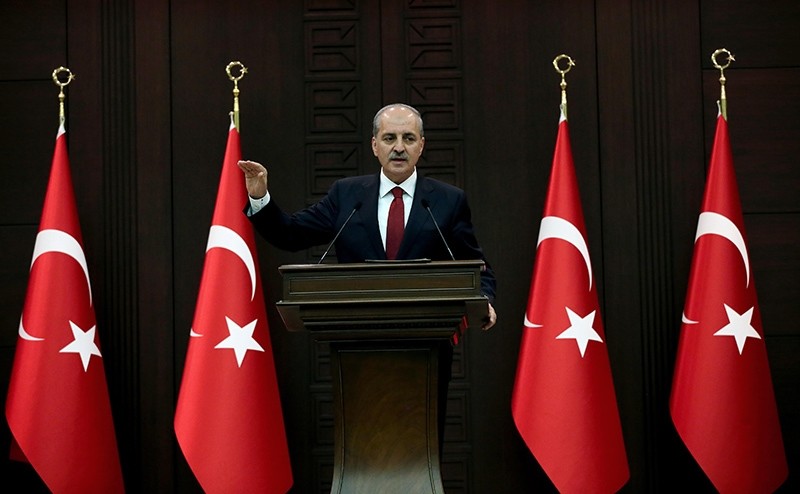 The Turkish government's Cabinet convened on Monday at Çankaya Palace in Ankara under the chairmanship of Prime Minister Binali Yıldırım. Deputy Prime Minister Numan Kurtulmuş informed the media members present that Turkish – European Union (EU) relations were discussed as he underlined that the relationship between the two goes far beyond the refugee deal. In addition Kurtulmuş also spoke on the recent developments in Operation Euphrates Shield, underlining that the aim is to clear Daesh from Turkey's borders.

Though Turkish – EU relations were tense following the failed July 15 coup attempt due to the controversial stance of some EU officials, Deputy PM Kurtulmuş stated that the EU had comprehended the rising democracy and spirit of unity and togetherness in Turkey. Speaking to media persons during the Cabinet meeting, Kurtulmuş said, "Turkey – EU relations is not a matter to be approached under the framework of the refugee crisis, as it would be faulty to degrade relations due to the refugee matter." As the Turkish deputy prime minister further addressed issues of ongoing investigations on the Gülenist Terror Group (FETÖ) and claims of the possibility of a new coup attempt, Kurtulmuş also noted that Justice Minister Bekir Bozdağ had done a presentation to the Cabinet's members where he had also suggested an amendment to the criminal procedures act.

Commenting on Turkey – EU relations Kurtulmuş further stressed that additional chapters must be opened by the EU in Turkey's membership process. "Turkey is in favor of opening new chapters with the EU as Turkey does not have any hesitations for these chapters to be opened, especially the chapters 23 and 24," he added. As Chapter 23 is on judicial and fundamental rights and Chapter 24 on justice, security and freedoms, Kurtulmuş said Turkey has no hesitations regarding these matters and that there is no need to take a step back on these topics.

Continuing on by addressing the ongoing Euphrates Shield military operation, which is being conducted by the Turkish Armed Forces (TSK) jointly with the Free Syrian Army (FSA), Kurtulmuş reminded the media of the three red lines for Turkey in carrying out the operation. "The first is Turkey's necessity to protect its borders from terror organizations in Syria. The second is Turkey supporting the territorial integrity of Syria, thus willing to do all means of interfering to preserve it [the territorial integrity]," Kurtulmuş added, and stated the third as preventing any PYD corridor in northern Syria, which would also affect the territorial integrity of Syria.

As the withdrawal of the terrorist PKK-affiliate, the PYD, to the West of the Euphrates River continues gradually, the Turkish deputy prime minister stressed that the matter has always been the withdrawal of the PYD's forces. "In this respect, Turkey has persistently reiterated for the withdrawal of PYD to the West of the Euphrates River. We will continue our determination in the region until all means of terror is eliminated completely," he added. In regards to the discussions on a possible operation in Raqqa and Mosul, Kurtulmuş reminded those gathered that Turkey is in favor of local forces conducting such an operation, as he further underlined that the operations must be conducted under the surveillance of the international coalition.

Adding on to his remarks by touching upon the ongoing investigations on FETÖ and the complaints on possible faulty dismissals, Kurtulmuş stressed that the country is going through a very sensitive period and he urged everyone to respect these sensitivities of the government. He said the government will be fair, as he highlighted that those who make anonymous tips are also conducting criminal activity. Commenting on claims of a possible new coup attempt, Kurtulmuş stated that though July 15 may have failed, the FETÖ terror group will still try to disturb the country. However, he assured that the government is taking all necessary measures to prevent such an incident from reoccurring.