Pentagon: Turkey not included in air operations in Mosul 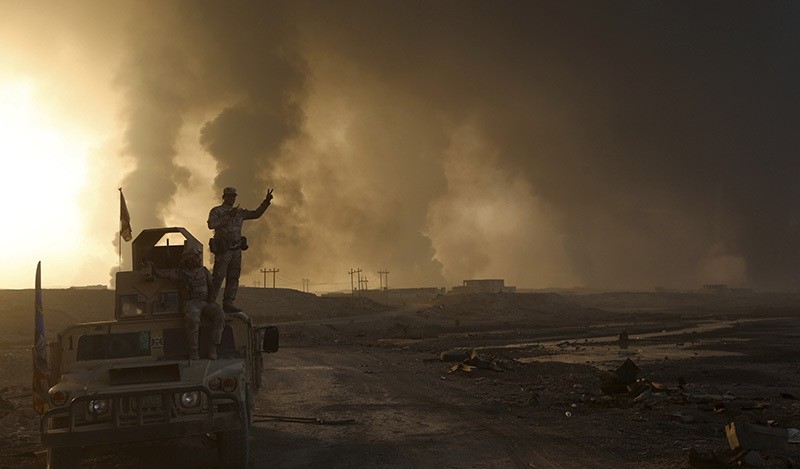 Smoke rises from Daesh positions after an airstrike by coalition forces in Mosul, Iraq, Tuesday, Oct. 18, 2016 (AP Photo)
by Ragıp Soylu Oct 19, 2016 12:00 am
U.S. Central Command (CENTCOM) said on Wednesday that Turkey is not involved in the U.S.-led anti-Daesh coalition's air operation in Iraq.

The statement differs from the Turkish Defense Minister Fikri Işık's announcement yesterday that the Turkish military and the coalition had reached an agreement to utilize the Turkish Air Force to target Daesh positions in Iraq, specifically Mosul.

"The Turks are not currently on the Coalition Air Tasking Order. We have had discussions with both Ankara and Baghdad about this possibility, but adding the Turks would be the Government of Iraq's decision since all Coalition activities are done with the permission of the government of Iraq," read the CENTCOM statement released to Daily Sabah.

Chief od Turkish General Staff, Gen. Hulusi Akar, has been in Washington since last Friday and had bilateral meetings with top American officials over the weekend, including his American counterpart Gen. Joseph Dunford. Akar conveyed Turkey's concerns on sectarian tensions in Mosul and is expected to raise Turkey's demand to be included in air operations in Iraq.

Turkey is keen to join anti-Daesh operations directly or indirectly with the Sunni Arab forces it trained at the Bashiqa camp near Mosul, which caused a verbal row between Ankara and Baghdad, the latter accusing Turkish forces of trespassing into Iraqi territory.

The Sunni force trained by Turkey are members of the Nineveh Guards, formerly known as al-Hashd al-Watani, who are loyal to the former governor of Mosul, Atheel al-Nujaifi. Some local reports said the Nineveh Guards have been deployed with Kurdish peshmerga forces around the crucial Mosul dam.
Last Update: Oct 20, 2016 10:10 am
RELATED TOPICS