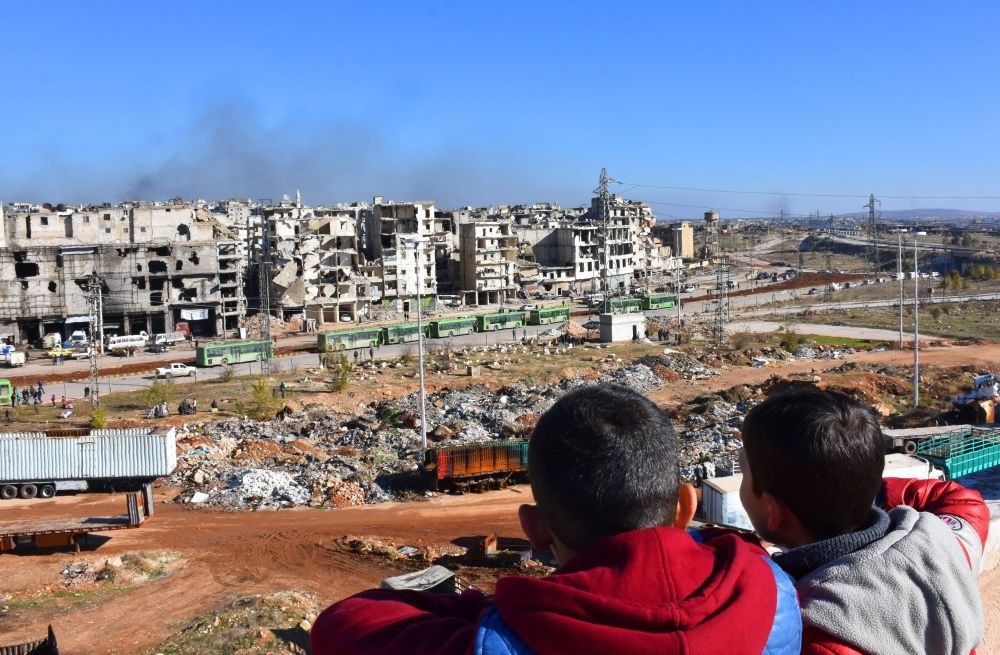 Syrian children watch on as buses depart during an evacuation operation of rebel fighters and their families from rebel-held neighbourhoods in the embattled Aleppo.
by Yunus Paksoy Dec 17, 2016 12:00 am

President Erdoğan, Prime Minister Yıldırım and Foreign Minister Çavuşoğlu have been exerting efforts to keep the evacuation plan for 80,000 civilians on track as Iran-backed militias and the Assad regime attack humanitarian convoys and disrupt the process

The evacuation process for 80,000 to 100,000 residents of eastern Aleppo has been brought to a halt several times since Turkey and Russia agreed on a cease-fire in the city earlier in the week. As Iran-backed pro-Assad forces disrupted the evacuation, Ankara has exhausted every diplomatic channel to bring tens of thousands of civilians to safety.

President Recep Tayyip Erdoğan said he discussed the current situation in Aleppo with U.S. President Barack Obama on Thursday. In addition, President Erdoğan had multiple phone calls with Russian President Vladimir Putin over the evacuation process in Aleppo. The president said the massacre and oppression committed against the people of Aleppo was now out in the open in front of the whole world. "Having such a tragedy in the 21st century is a shame for humanity. If we want a solution in Syria, the current situation in Aleppo must be taken under control," Erdoğan said.

Also, Prime Minister Binali Yıldırım and Iran's First Vice President Eshaq Jahangiri discussed the latest situation in Aleppo over the phone on Friday, a source at the Prime Ministry said.

Yıldırım told Jahangiri about the recent attack on a convoy of civilians leaving eastern Aleppo by pro-Syrian regime foreign terrorist groups, said the source, speaking on condition of anonymity due to restrictions on talking to the media. He added the humanitarian situation in eastern Aleppo remains alarming and Turkey was ready to do its best for civilians trapped there.

The premier also said Turkey was willing to cooperate with Iran to evacuate civilians from eastern Aleppo and provide humanitarian aid to the region, the source said.

Sources on the ground told Daily Sabah that the evacuation process had to stop due to attacks on the civilian convoy. "We are waiting for security on the road for us to leave Aleppo. It is difficult to leave our home, but there is no other option," the anonymous source said.

Apart from his phone call with Jahangiri about the evacuation process in Aleppo, Yıldırım talked with his Russian counterpart Dmitry Medvedev. Yıldırım called on Medvedev to use Russia's "influence" on its stakeholders in Aleppo, the source, who spoke on condition of anonymity due to restrictions on talking to the media, said.

The prime minister said the evacuation from Aleppo should be carried out without harming civilians.

"Turkey is the only country that protects the people of Aleppo and reflects their tragedy in the international arena," Markar Esayan, Istanbul deputy for the ruling Justice and Development Party (AK Party) told Daily Sabah.

Explaining that President Erdoğan and the government spent dozens of hours for the fate of civilians in Aleppo, Esayan said that Turkey's dialogue with Russia played a significant role. "Turkey's talks with Russia put pressure on Iran and the regime. Turkey alone prevented civilians from being massacred," he contended.Esayan expressed his hope that the remaining 80,000 people will be evacuated safely from eastern Aleppo. "It is taking place thanks to Turkey's efforts," he said.
RELATED TOPICS