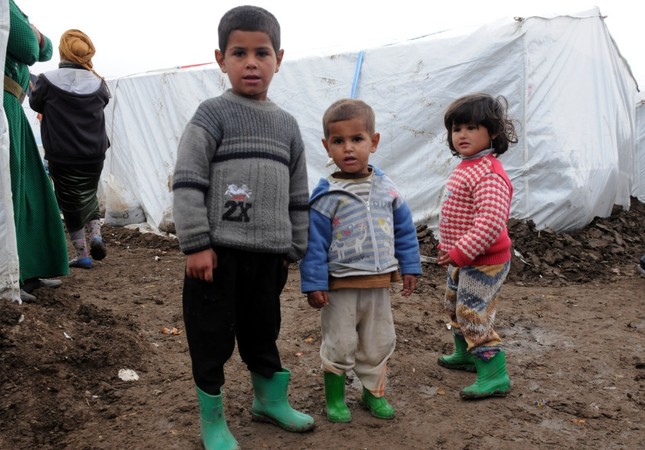 260,000 out of 3 million Syrian nationals in Turkey were hosted across 26 temporary housing facilities equipped with schools, hospitals and athletic facilities.

In an effort to provide Aleppo evacuees with a safe haven, the refugee camp in the southern Osmaniye province has been expanded. In addition, Turkish nongovernmental organizations are working around the clock in Idlib, Syria to set up tent camps

A refugee camp in southern Turkey has been completing last minute improvements and preparations to house thousands of civilians fleeing war-torn Aleppo.

The camp in Osmaniye province was originally founded in 2012 as a tent camp by the Prime Ministry's Disaster and Emergency Management Presidency (AFAD).

However, the authorities have decided to increase the camp's capacity and improve facilities. It will now be able to shelter just over 16,700 people. Currently, 95 percent of the new project - built on 258 acres of land - has been completed.

Over 3,350 shelters called "container houses" will take in their first residents in January. Turkish gendarmes will maintain security outside the camp and private guards will be on 24/7 duty inside.

It also has a water treatment plant equipped with the latest technology, with the capacity to purify 2,500 cubic meters of water daily.

A local lawmaker, Suat Önal of the ruling Justice and Development Party (AK Party), told Anadolu Agency: "In this container city [camp with container houses] with better living conditions, we will host our Syrian refugee brothers and sisters whom we hosted previously in tent cities." Explaining that European countries were criticizing Turkey's democracy but were cherry-picking the small number of Syrian refugees whom they wanted to accept, Önal said Western nations had not shouldered the responsibility for sheltering innocent refugees. "Turkey kindly hosts over 3 million Syrian refugees today. The world and humanity shall see it," he said.

"Those who criticize Turkey's democracy shall see how our government embraced so many people and cares about them by shouldering all the financial responsibilities. This is model behavior for humanity," Önal added. Turkey is sheltering close to 260,000 Syrian nationals across 26 temporary housing facilities equipped with schools, hospitals and athletic facilities, according to AFAD.

Since 2011, Turkey has allocated at least $12 billion to humanitarian relief efforts, whereas the international community's contributions remain at $512 million. The Global Humanitarian Aid Report 2016 said Turkey's humanitarian assistance makes up 11 percent of total aid. According to the research, Turkey is the second-largest contributor to humanitarian relief and "the most generous country" in the world.

Syria has been locked in a vicious civil war since early 2011. Since then, more than a quarter of a million people have been killed and more than 10 million displaced across the war-torn country, according to the U.N.

Two weeks ago the Syrian opposition forces and the regime reached a ceasefire deal, brokered by Turkey and Russia, to evacuate civilians from eastern Aleppo to safe areas in opposition-held Idlib.

So far, some 44,000 people have been evacuated from the area, according to the Turkish Presidency's spokesman, İbrahim Kalın.

In addition to the aforementioned efforts for Syrian refugees inside the Turkish border, the government, in collaboration with nongovernmental organizations, has been looking after internally displaced people (IDP) within Syria as well. Several NGOs have been actively participating in the delivery of urgent humanitarian aid to Aleppo evacuees.

The Turkish Red Crescent, along with other Turkish NGOs, are currently working around the clock to set up a tent camp in the Kammunah region of rural Idlib where up to 20,000 Aleppo evacuees are expected to be settled in. Daily Sabah visited the camp on Dec. 21 where there was already Aleppo evacuees waiting for food, beds, heating stoves and other basic needs in difficult winter conditions.

While some of more than 40,000 people were welcomed by their relatives in and around Idlib, offering them a safe haven, many of the evacuees are expected to be brought to tent camps. As winter conditions get tougher for civilians, a new regime offensive against Idlib could create another humanitarian crisis.

Share on Facebook Share on Twitter
Previous in Politics As part of ongoing counterterrorism operations across Turkey, some... Next in Politics Mustafa Akıncı, the president of the Turkish Republic of Northern...
DAILY SABAH RECOMMENDS