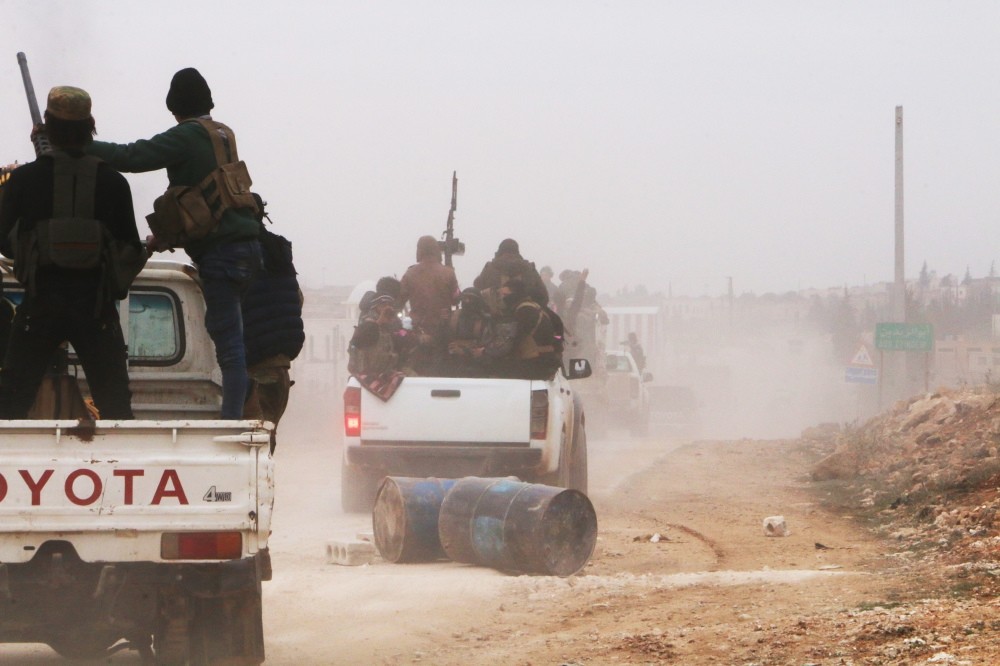 Free Syrian Army forces, in cooperation with the Turkish military, advancing towards al-Bab.
by Daily Sabah Feb 10, 2017 12:00 am

While Turkey's efforts in and around the northern Syrian town of al-Bab are appreciated and praised, the Turkish military and Free Syrian Army forces are close to liberating the town from Daesh terrorists, reports on the ground say

The liberation of the north Syrian town of al-Bab is imminent as the Turkish military, in cooperation with the Free Syrian Army (FSA), advances within the town. Turkish troops, tanks and armored vehicles recently entered the town and are currently engaged in fierce clashes with Daesh terrorists inside al-Bab as the fall of the town is expected to take place soon. The strategic hills overlooking the north Syrian town of al-Bab were captured on Wednesday, which paved the way for the Turkish forces to advance within al-Bab. Meanwhile, five more Turkish soldiers were killed in an attack carried out by Daesh in al-Bab, reports in the Turkish media said.

As the Turkish military intensifies its offensive to take al-Bab from Daesh terrorists, the terrorist group retaliates with sudden counterattacks. Thursday, the terrorist organization attacked a group of Turkish soldiers, killing five and injuring six others. A total of 44 Daesh terrorists were killed over the last 24 hours as part of Turkey's Operation Euphrates Shield in northern Syria, the military announced yesterday. The Turkish Armed Forces (TSK) also hit 253 Daesh targets in air and artillery strikes over the same period, the General Staff said in a statement. Coalition aircraft hit six Daesh targets in northern Syria within 24 hours, the statement said.

The Turkish military has recently killed top Daesh figures in al-Bab. Khalid al-Urduni, the supposed Daesh-appointed governor of al-Bab, was killed on Saturday, Feb. 4, in counterterrorism operations, according to a written statement released by the Turkish military the following day.

The town has been surrounded as well. With Turkey-backed FSA fighters closing in on the town from the north, east and west, the Assad regime closed in on al-Bab from the south. The Assad regime's forces took control of a village and a few positions overlooking the only road connecting al-Bab with Daesh-controlled territory in the southeast on Sunday.

The regime forces edged closer to the town itself, which is the last remaining Daesh bastion in Aleppo province. They are approximately 5 kilometers away from the town's southern edges. Speaking to the NTV television channel on Wednesday, presidential spokesperson İbrahim Kalın said the Turkish military is in contact with Russian authorities to avoid any encounter with the Assad regime on the ground.

John Dorrian, spokesman for the U.S.-led coalition in Iraq and Syria, said that Turkey's efforts to defeat Daesh in al-Bab are significant. Touching upon the importance of Turkey's efforts in battling Daesh, he said, "Turkey has done an incredible job in surrounding the enemy in northern Syria. They completely stopped the militants from infiltrating Turkey and other countries."

"We have carried out many airstrikes on al-Bab and surrounding areas. With the help of Turkish troops, Daesh is in a seriously difficult situation in the city," he added.

Eric Pahon, one of the spokesmen for Pentagon, also praised Turkey's efforts in Syria to battle Daesh. "There is an increasing cooperation between Turkey and the U.S. recently around al-Bab. Therefore there is a positive development with our NATO ally on the Syrian issue," he said.

Pahon also said that Turkish and U.S. authorities have been exchanging views regarding al-Bab for months. He underlined the close cooperation between Ankara and Washington about the issue.

Al-Bab plays an important role in Turkey's plans in Syria. In this respect, Turkey's Chief of General Staff Gen. Hulusi Akar visited army troops stationed in the southeastern provinces of Kilis and Gaziantep, bordering war-torn Syria, the military announced in a statement on Sunday. The statement indicated that Gen. Akar, accompanied by chiefs of air staff and commanders of the army, visited and inspected Turkish troops garrisoned in the Turkish cities of Kilis and Gaziantep.

Akar also visited the operations command centers where the ongoing Operation Euphrates Shield and counterterror operations are coordinated and the statement indicated that Akar's visit in the region is ongoing.

Turkey launched Operation Euphrates Shield on Aug. 24 last year to support the FSA to clear its border area of terrorist groups. After taking control of the towns of Jarablus and al-Rai, FSA fighters launched an operation to capture Daesh-held al-Bab in early December, reaching the outskirts of the town by late December. Al-Bab is one of the two objectives of Operation Euphrates Shield, with the other being Manbij, which is currently controlled by the Syrian Democratic Forces (SDF) dominated by the PKK's Syrian offshoot, the Democratic Union Party's (PYD) armed wing, the People's Protection Units (YPG).
RELATED TOPICS