Turkey's generosity on refugees should be matched by others, UN Chief says 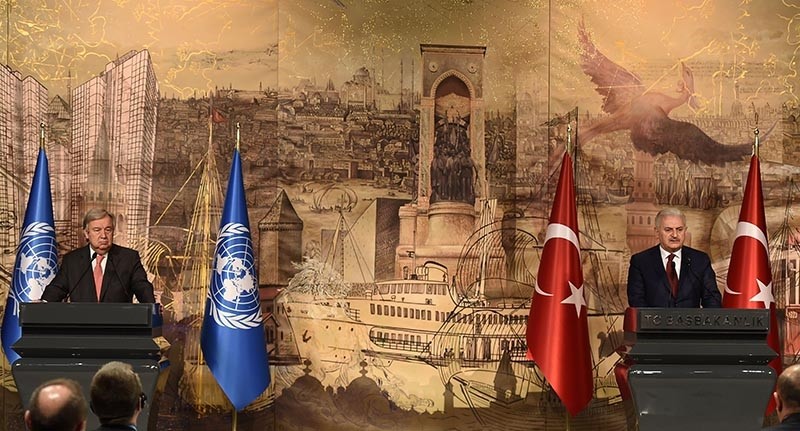 The generosity of Turkey regarding taking care of Syrian refugees should be matched by other countries, UN Chief Antonio Guterres said in a joint press conference with Prime Minister Binali Yıldırım on Friday.

Guterres had high praise for Turkey's efforts to deal with the millions of refugees pouring into its country. He stressed that Turkey is effectively handling the situation single-handedly at a time when other countries are closing their borders and walking away from responsibility.

"This generosity should be matched," he said of Turkey. "This is also a moment to launch an appeal - when we see so many borders being closed and when we see so many escaping their responsibilities-this is a moment to appeal for effective burden-sharing and to make sure that the integrity of the international refugee protection regime is maintained."

On Cyprus, he said the UN is in service to the two communities and the guarantor states stand ready to support a solution accepted by everyone.

Prime Minister Yıldırım once gain urged the world to do its fair share to help solve problems in the region.

Yıldırım said Turkey is hosting three million refugees without much support from other countries and the entire world is aware.

"We want everybody to accept their responsibilities and not to be stingy on sharing burdens to end the problems in this region," he said.

Referring to Cyprus talks, Yıldırım said any new administration there should be just and the two communities, Turkish and Greek, must be equally represented.

Yıldırım said he was happy to host the new Secretary General on one of his first foreign visits as the Turkish leader again called for extensive UN reform.

He acknowledged Turkey's role in the Astana talks and a cease-fire in Syria as he stressed the importance of a political solution in Syria.

Guterres is on a two-day visit to Turkey and his first to the country as head of the UN.

Guterres is due to meet Saturday with President Recep Tayyip Erdoğan in Istanbul, before travelling to Saudi Arabia, the United Arab Emirates, Oman, Qatar and Egypt.

Guterres, a former prime minister of Portugal who was UN refugee chief for a decade, will then attend a G20 ministerial meeting in Bonn and the Munich security conference later this month.