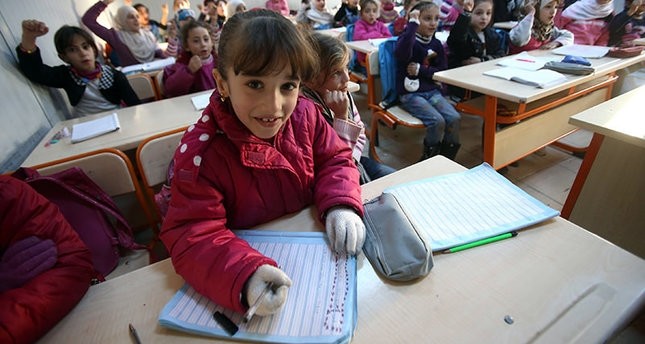 Speaking in an exclusive interview with Anadolu Agency (AA), İsmet Yılmaz said over half of the 850,000 Syrian refugee schoolchildren in the country were being educated in Turkey's public schools alongside local children.

"We want to provide national education not only to our own children but also to those who have taken refuge in our country and those who are not able to live in their own country. If a person is uneducated, he or she will be open to additional risks wherever they are," Yılmaz said. He said the authorities carried out intensive studies into the education of Syrian refugee students after Turkish Prime Minister Binali Yıldırım's order last June to immediately complete an offer for free schooling.

Yılmaz said the curriculum had been scheduled with Arabic and Turkish teachers together because Turkey believes Syrian refugees will be able to back to their homeland after the war is over.

Refugee students have missed years of education due to the closure of schools in their home countries and prolonged traveling. The European Union has contributed to Turkey for their education and pledged to send 300 million euros."In a first step, they have sent 90 million euros," Yılmaz added, saying the ministry distributed books and hired new teachers with the funding.

Turkey hosts about 3 million Syrian refugees, more than any other country in the world. The country has spent around $25 billion on helping and sheltering refugees since the beginning of Syrian civil war in early 2011.

Since then, hundreds of thousands of people are believed to have been killed and millions more displaced by the conflict.
RELATED TOPICS