MHP to continue to support gov't for stronger Turkey 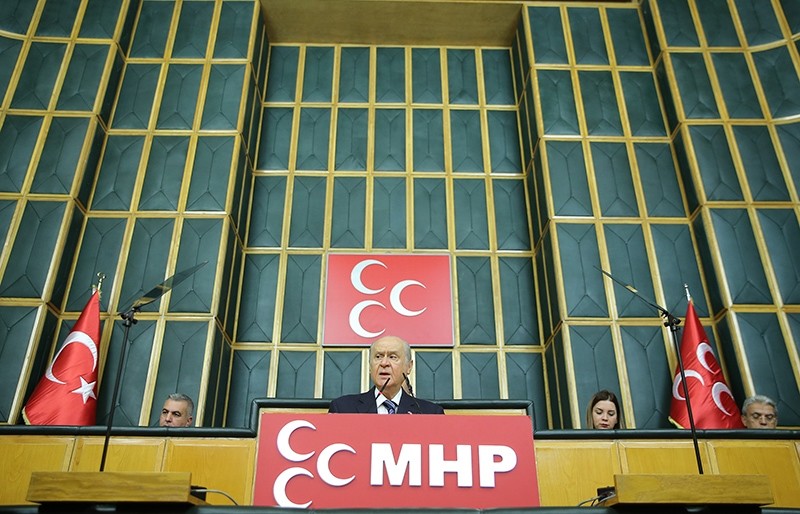 Speaking at his party's parliamentary group meeting, Bahçeli condemned FETÖ for threatening Turkey's security and said that the MHP will support the government to ensure that those who pose a threat to the country are held accountable for their crimes.

"Yenikapı spirit is a picture that summarizes a national stance and resurrection which we will never give up" Bahçeli said, adding that his party will say yes in the upcoming referendum on constitutional amendments.

He urged the U.S. to extradite FETÖ leader Fetullah Gülen to Turkey, noting that his extradition will revive relations between the two countries.

Bahçeli also touched upon the upcoming operation to liberate Raqqa from Daesh, saying that Turkey should continue to keep channels of dialogue open. He highlighted that Manbij must be completely liberated from PKK's Syrian offshoot Peoples' Protection Forces (YPG) as it is a matter of Turkey's security.

"MHP stands beside the military, the government and the Turkish state" Bahçeli said, in a pledge of support for the government's cross-border operation to clear the border from terrorists.

Former and current deputies and party delegates from the MHP opposing Bahçeli, who has ruled the party since 1997, held a meeting on Feb. 18 in Ankara to launch their "No" campaign for the upcoming referendum and determine their strategy.

Kayseri lawmaker Yusuf Halaçoğlu, Balıkesir lawmaker Ismail Ok, and Isparta lawmaker Nuri Okutan and prominent party member Sinan Oğan, who were recently referred to the party's disciplinary committee for discharge proceedings on Feb. 13, were among the figures who attended the meeting.

In addition to MHP-linked figures, minor center-right and right-wing parties leaning "No" in the referendum, such as the Felicity Party (SP), Great Union Party (BBP), Homeland Party (YP), Democrat Party (DP) and Liberal Democratic Party (LDP), were also invited to the meeting.

They have announced that they will vote no in the upcoming referendum on a possible switch to presidential system, which was agreed by the ruling Justice and Development Party (AK Party) and MHP administration. The support of MHP's voter base and field organization to the proposed system remains ambiguous and will be one of the key determinants of the outcome on April 16.

The revolt among MHP members was sparked by the November 2015 general election, where the MHP narrowly got into parliament and won the least number of seats among all parliament's parties, - just 40 out of 550 compared to 80 in June 2015 elections - even falling behind their arch rival pro-PKK Peoples' Democratic Party (HDP) in terms of seats. The party dismissed former deputy parliament speaker and chairman candidate Meral Akşener in September 2016 and incumbent Gaziantep deputy Ümit Özdağ in November.

Akşener, Oğan, Özdağ and Aydın, backed by a significant number of party delegates and provincial heads, have been fighting to remove Chairman Devlet Bahçeli, who has led the MHP for nearly 20 years. The dissidents tried to call a party congress last year, but they were blocked by the leadership.