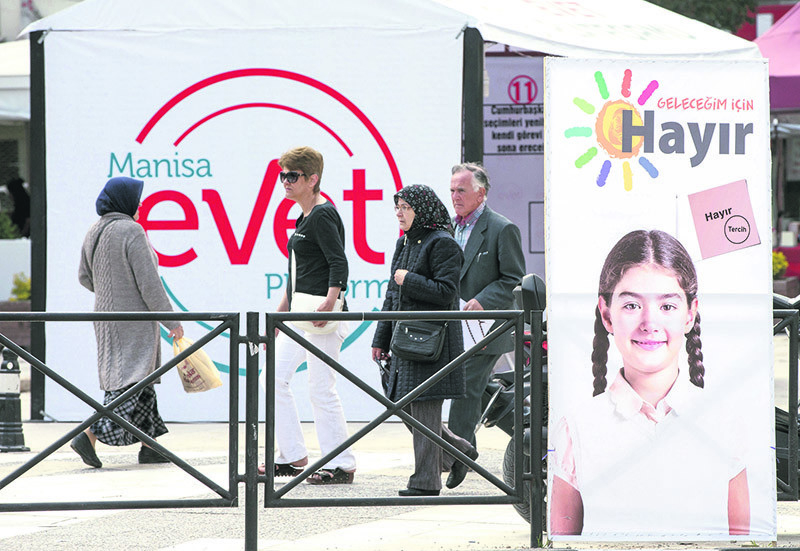 With less than five days to go for the referendum on proposed constitutional amendments, both the president and prime minister continued to hold meetings and rallies to persuade voters on why the proposed changes should be supported with a "yes" vote on April 16.

One of the important claims the "yes" camp makes, is that the new system will bring about a necessity for the political parties, seeking to be in the office, to be more inclusive and force them to become more appealing to all segments of the nation, as the nominated presidential candidate will have to receive the support of more than the 50 percent of the public.

Experts have claimed this as a major change to the current political culture where it allows a party to form a government with only about 20 to 30 percent of support, through establishing short-lived coalition governments.

"Due to the technical change emerging with the new system, where the president is forced to receive 50+1 percent of the votes, the parties are no longer able to form governments with weak support. In a way, this will change the political culture which Turkey has long been accustomed to. For example, the Republican People's Party (CHP), without reaching out to voters beyond their traditional electoral base, including the Kurds or the conservative voters, will not be able to achieve a desired result. The AK Party has already done so by becoming an appealing party to the Kurds, conservatives and the nationalist," said İsmail Çağlar, the director of public and media researches at the Ankara-based think tank, the Foundation for Political, Economic and Social Research (SETA), and an academic at Istanbul Medeniyet University.

Çağlar added that while the parties were able to get a part in the coalition governments, despite their low voter support, they will now have to form types of coalitions with other parties during the elections at the ballot boxes to become more inclusive and more appealing to a larger voter base.

The supporters of the proposed changes argue that Turkey has long suffered from short-lived governments, some with an average lifespan of about a year-and-a-half.

On April 16, 55.3 million Turks are expected to go to the polls on the constitutional amendments that have been on agenda since Erdoğan's election as president in August 2014.

The changes will abolish the prime minister's post, which the AK Party claims resulted in an ineffective dual-headed political system, and replace it with a stronger system, which is expected to produce stability and a more effective system of governance in the long term.

Meanwhile, Prime Minister Binali Yıldırım said Wednesday that the proposed changes were not only for the AK Party, but that they were also in favor of all the parties that aim to work and put an effort to serve the people.

"I am sure the way toward forming a government is going to be paved for anyone who wants to work and struggle, aiming to win people's hearts. The path is open for anyone who embraces Turkey, however, the road toward a government would be closed off to divisive, regional, ethnicity-based parties, or a specific religious group," Yıldırım said in İzmir, underlining that with the new system of government the channels to divisive politics were being shut down and a way toward unity was opened.

"This is the system. How is this a loss for the country?"

Yaşar Hacısalihoğlu, Yeni Yüzyıl University's rector and an academic in the Department of International Relations, said that with the changes in the new system, the political atmosphere will have to changein to one that is more embracing, which will lead to the elimination of political polarization.

"The political rhetoric will have to soften up and the parties or the presidential candidate will need to get the approval of voters from various parts of society. This will make them more conciliatory and accommodating to the needs of the diverse social fabric of the country," Hacisalihoğlu said, adding that it will also diminish the political tension among different poles. He added that the new system will also make representation more fair and equitable, addressing the needs of Turkey's socio-political dynamics emerging from its political diversity.

In the meantime, a survey by pollsters ANAR put the "yes" votes at 52 percent, reported Reuters on Wednesday.

The pollster conducted the survey among 4,000 people between April 5 and April 10, in Turkey's 26 provinces.

The survey revealed that the number of undecided voters has fallen to 8 percent and added that it has led to a 2 percentage point boost for the "yes" campaign since the beginning of March.

Similarly, polling company, Konsensus put "yes" votes at 51.2 percent after the distribution of undecided voters, according to the same report by Reuters.

Konsensus had conducted its survey with 2,000 people, also face-to-face, between April 2 and April 8 in 41 provinces.

President Erdoğan, speaking in eastern Turkey's eastern Erzurum province Wednesday said, people will be able to elect their governments without any intermediaries.

"Now the state becomes the people's state, without any intermediary in between. April 16 is going to be a nightmare for those burning with desire to form a government, but serve only themselves instead of the people. Their nightmare will become my people's reason to celebrate," President Erdoğan told a large crowd in Erzurum, criticizing the current parliamentarian system.

Meanwhile, Prime Minister Yıldırım also underscored that the new system would force parties to be more inclusive and will reflect all colors of the country as it would need more than 50 percent of all votes to be able to form a government.