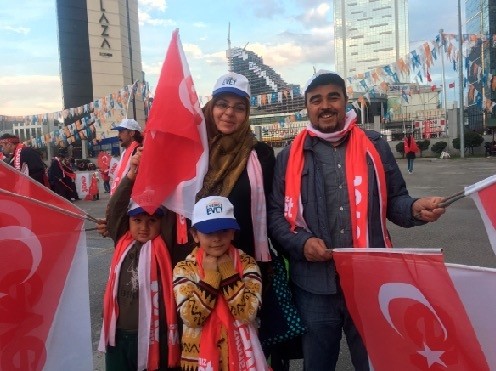 AK Party supporters seen coming together in Ankara after the referendum victory on April 16.
by Merve Aydoğan Apr 17, 2017 12:00 am
Millions of Turkish citizens went to the ballots to cast their votes for the constitutional amendment package as thousands of Justice and Development Party (AK Party) supporters gathered at party headquarters to celebrate their victory. "I voted 'yes' for the sake of my nation, my country and for my state. We shall walk hand-in-hand, in unity with those 'no' voters after today," said AK Party supporters yesterday in Ankara.

Despite unfavorable weather conditions, thousands of citizens of all ages from the country's youth to the elderly gathered at AK Party headquarters in Ankara yesterday. In a highly enthusiastic atmosphere, Burak Demirci (19) shouted AK Party slogans while celebrating the referendum results ahead of Prime Minister Binali Yıldırım's arrival at AK Party headquarters.

With 51.4 percent of the vote in favor of the referendum before Daily Sabah went to print, Demirci said the reason behind his "yes" vote came shortly after reading the 18 articles. Demirci said, "I decided to vote 'yes' after reading the articles. I have also voted 'yes' to end the country's enslavement to foreign states, to become one and establish unity. Once we leave here today, we will once again walk hand-in-hand with those 'no' voters," he told Daily Sabah. While Demirci emphasized the country's unity, the Kahyaoğlu couple with their two young children were see waving Turkish flags and flags for the AK Party. Kürşat Kahyaoğlu (47), who cast his vote at the custom gates before coming from the U.S., said he voted 'yes' for the country's prosperity.

Kahyaoğlu stated that him along with other "yes" voters in the U.S. had campaigned for the change within the bounds of their own possibilities regardless of the strong Gülenist Terror Group (FETÖ) structure, along with the Republican People's Party (CHP) and the Peoples' Democratic Party (HDP) communities. "FETÖ is still highly active in the U.S. as they organize events with U.S. government officials," he added. Meanwhile, his wife Elif Kahyaoğlu (40) said they had voted 'yes' for the unity of the country as well as for the future generations and their own children. When asked whether they favored President Recep Tayyip Erdoğan becoming the AK Party chairman once more, the couple said that "it would complete the whole picture," as Kürşat noted, "you cannot love a rose without its thorn."

Asya Eke (28) a mother of two, said she arrived to the headquarters' venue shortly after casting her vote along with her husband. She said, "I voted 'yes' so that the June 7 snap elections [elections in which the Turkish people took to the polls regarding a coalition government which ended unsuccessfully], the July 15 [failed coup attempt by FETÖ] never recurs. I voted 'yes' so that people will never again be judged or looked down upon for the way they dress. I also voted 'yes' so that foreign powers will never get a chance again to influence our country." Though some said they voted "yes" because they trusted and believed in President Erdoğan, İbrahim Karataş (32) said he and his family voted yes for the sake of future generations.

On the evening of April 16, Turkey experienced a historical event in its political history where the majority of the Turkish citizens had the final say in the proposed constitutional amendment package that paved the way for switch to a presidential system of governance. Thousands of AK Party supporters chanted and sang the AK Party campaign anthems while waiting with Turkish flags in their hands, anticipating Prime Minister Yıldırım's balcony talk. There were tables and large screens set at the party headquarters to follow the results minute-by-minute.
RELATED TOPICS