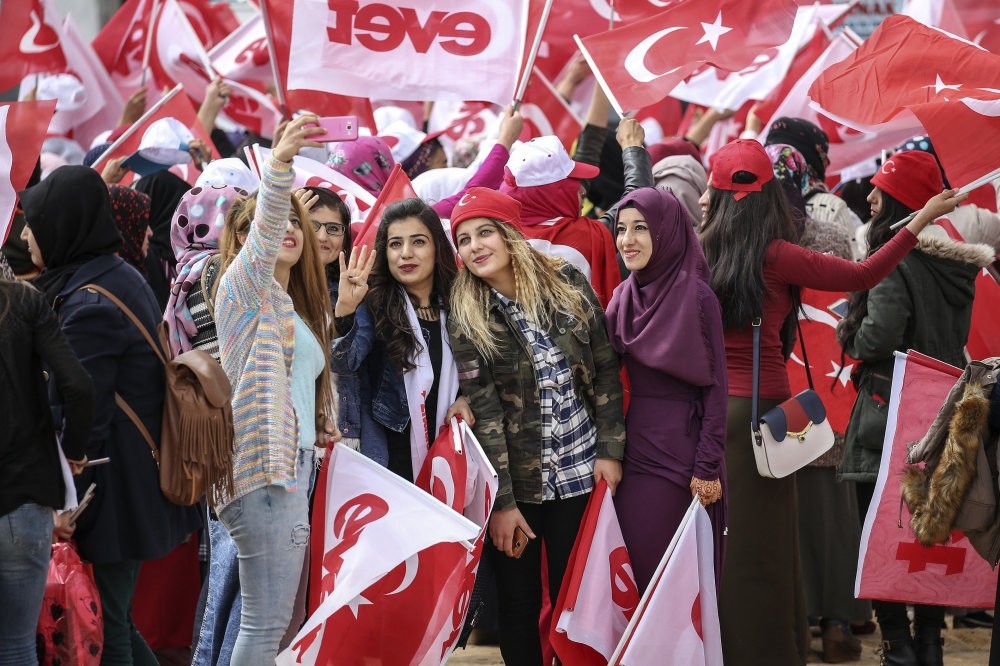 ,We must establish an understanding of one nation across Turkey,, President Erdou011fan told AK Party members during his rejoining ceremony to the party on Tuesday.
by Daily Sabah May 04, 2017 12:00 am

President Erdoğan highlighted, during his rejoining ceremony on Tuesday that, the AK party needs to be more inclusive and should expand its voter base

With President Recep Tayyip Erdoğan's return to the ruling Justice and Development Party (AK Party), its road map in the new era of the presidential system became more apparent as Erdoğan urged ministers, deputies and party members to be more inclusive. Addressing AK Party members on Tuesday at the party headquarters in Ankara, President Erdoğan emphasized the importance of unity as a nation.

The president said, "We must establish an understanding of one nation across Turkey's 81 provinces." He further added on to his remarks that "in the coming period, we will continue our glorious walk together, stronger and with more determination."

As the reshuffling of Cabinet and the restructuring of the party are expected ahead of the 2019 municipal and presidential elections, President Erdoğan signaled at a more inclusive strategy as he spoke both at AK Party headquarters and prior to leaving for Russia yesterday. Erdoğan said, "Whatever we have done until today, we have done it for our people. We have come this far with the prayers of the people. The more we have worked with them, the more they have embraced us."

He vowed to continue working day and night for the nation, affirming, "We have never made any distinction between our people in terms of the services we provide them. We have never practiced discrimination, nor will we ever do that."

In that respect, Erdoğan said "All 80 million people of Turkey are first-class citizens," while drawing attention to the importance of the AK Party Women's Branch, saying: "All necessary initiatives will be taken to reach the youth and to reach the hearts of all women."

In addition, ahead of his visit to Russia, Erdoğan addressed members of the media in Ankara saying that all the representative bodies in the AK Party will be reassessed.

"If I am entrusted with such duty [of chairmanship] by the General Assembly, then there will be serious discussions on the reassessment of all bodies [within the AK Party]. It has always been my priority to establish a structure where 81 provinces of Turkey are represented, rather than a specific region," Erdoğan noted.

In another step taken within the scope of the new constitution, the name of the Supreme Council of Judges and Prosecutors (HSYK), which is charged with regulating the activities of judges and prosecutors, is being changed to the Council of Judges and Prosecutors Council (HSK). With the number of HSK members being decreased 13 from the previous 22, a total of 83 candidates have so far applied to Parliament for nominations. The parliament is expected to elect a total of seven members while the president will appoint four. The remaining two members will be chosen by the minister of justice and the undersecretary of the of Justice as neutral members. Two rounds of voting at the Parliamentary Joint Commission will be conducted in the scope of the membership process.

In regards to cases that are currently pending in the military court, the new constitution states that these cases will be sent over to the Court of Appeals and the Council of State, while other non-military cases will be transferred over to relevant courts within a four-month period.

In the meantime, Parliament will most likely discuss revising 144 articles in seven different laws at the end of May. One of the first items on the Parliament's agenda regarding the adjustments will be the presidential election law, followed by the article that states the president must cut ties with his/her political party.

Furthermore, the general elections law, the political parties' law, the HSK law and the military penal code are expected to be major topics on the agenda of discussions regarding the adjustment of laws at Parliament.