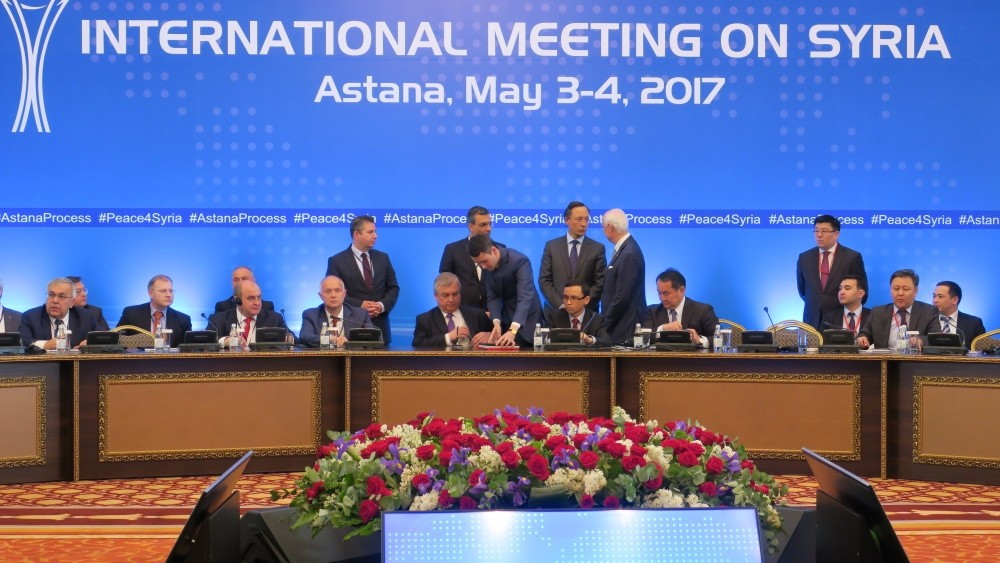 The memorandum regarding the establishment of ‘de-escalation zones' at different areas in Syria meets Turkey's expectations and also will serve to maintain permanent peace, experts said

After President Recep Tayyip Erdoğan and Russian President Vladimir Putin announced the establishment of "de-escalation zones" in Syria, details regarding the zones are becoming more evident as experts emphasize that recent developments are driving Syria towards a permanent peace solution. According to the memorandum, the de-escalation zones will include areas in Idlib province and certain parts of the provinces of Latakia, Aleppo, Hama, and certain parts of Homs province, eastern Ghouta and Damascus as well as certain parts of Deraa and al-Quneitra.

Though the de-escalation zones are expected to come into effect May 25, the aforementioned zones are not going to contain PKK-affiliate figures; namely, the Democratic Union Party (PYD) or its armed wing, the People's Protection Units (YPG), while they are mainly moderate opposition-dominated areas.

In regards to the de-escalation zones, the head of the Russian delegation in Astana, Alexander Lavrentyev, said that the Assad regime's fighter jets are not expected to fly over the zones for six months, noting yesterday that "the aviation operation in the de-escalation zones, especially that of the forces of the international coalition, is absolutely not envisaged, either with notification or without. This question is closed." However, while the full details of Thursday's deal between Turkey, Russia and Iran has yet to be released, the Turkish Ministry of Foreign Affairs said Thursday that operational and technical issues related to the "delineation of the lines of the de-escalation zones as well as to their administration will be tackled by the joint working group to be formed among the three guarantors."

Commenting on the Syria deal, an expert on the Middle East at the Ankara-based think tank Center for Middle Eastern Strategic Studies (ORSAM), Oytun Orhan, told Daily Sabah, "Although it is not possible to say that the deal meets Turkey's expectations 100 percent, it does meet a vast majority of expectations, especially given the reason for implementing these de-escalation zones, including Idlib." Reiterating that the Idlib region is a vast, open space that is prone to airstrikes by both the Assad regime and Russia, Orhan indicated that the "inclusion of Idlib in the de-escalation zones, considering its nearly 2.5 million civilians, will prevent a potential refugee influx at Turkey's southern border with Syria." He further stressed that the areas are dominated by opposition forces, thus eliminating the possibility of the Assad regime settling at bordering regions near Turkey. Orhan went on to say, "It is a plan that guarantees the existence of an opposition presence there." While emphasizing that the recent deal may pave the way to a permanent peace solution and a possible political transition, Orhan emphasized that other international actors must be included in the process for the deal to survive.

"If the guarantors [Turkey, Russia and Iran] could include the U.S. as well as the Gulf states, I believe that the chances of achieving peace in Syria would be highly likely. …The deal may end the conflict to a large extent, in accordance with the attitude of the U.S. For a political transition to be discussed, a complete de-escalation is necessary," Orhan said.

On the other hand, the director of Security Studies at the Ankara-based Foundation for Political, Economic and Social Research (SETA), Murat Yeşiltaş, stated that the deal must pass in the coming weeks to completely and effectively draw out possible plans for a solution in Syria. Yeşiltaş added that the deal regarding de-escalation zones meets Turkey's expectations but stated that it remains "unknown whether the deal will be sustainable." SETA's director of security studies further emphasized the necessity of including the U.S. and the Gulf states for the deal to succeed, emphasizing that implementation of the deal is also highly significant. Both Orhan and Yeşiltaş indicated that the de-escalation zones do not include the PKK-affiliate PYD/YPG, al-Nusra or Daesh and only cover the civilian population and the moderate opposition.