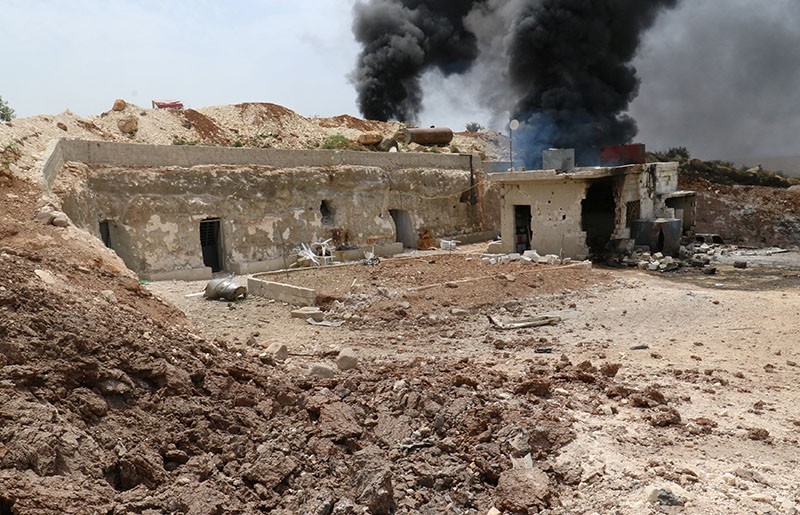 Smoke rises from an emergency service point after an airstrike at opposition-held Maar Zita in Idlib province, Syria April 27, 2017 (Reuters Photo)
by Daily Sabah with Agencies May 06, 2017 12:00 am

Guarantor states Turkey, Russia and Iran agreed on May 4 to establish four de-escalation zones in Syria for six months, according to a memorandum signed between the three countries.

Fighting subsided in Syria on Saturday after a deal signed by Assad regime backers Russia and Iran and opposition supporter Turkey to create four safe zones began to take effect, a monitor said.

Guarantor states will take all measures to continue fighting Daesh and other terrorist groups within and beyond Syria de-escalation zones, reports said.

The zones still exist only on paper and the cosponsors have until June 4 to finalize their borders under the terms of the agreement struck at peace talks in Kazakhstan on Thursday.

The agreement covers four main battlegrounds between the regime and opposition -- the northwestern province of Idlib, parts of Homs province in the center, the south, and the opposition enclave of Eastern Ghouta near Damascus.

It provides for a ceasefire, a no-fly zone, rapid deliveries of humanitarian aid to the designated areas and the return of refugees.

It builds on a ceasefire agreed between Turkey and Russia last December that reduced violence for a period.

The new proposal is significantly more ambitious, proposing the deployment of monitoring forces from the guarantor countries and seeking to ground all warplanes.

Sponsors of the deal hope that safe zones would bring relief for hundreds of thousands of Syrian civilians and encourage refugees to return. But officials have expressed skepticism, stressing that safe zones have not had an encouraging track record.