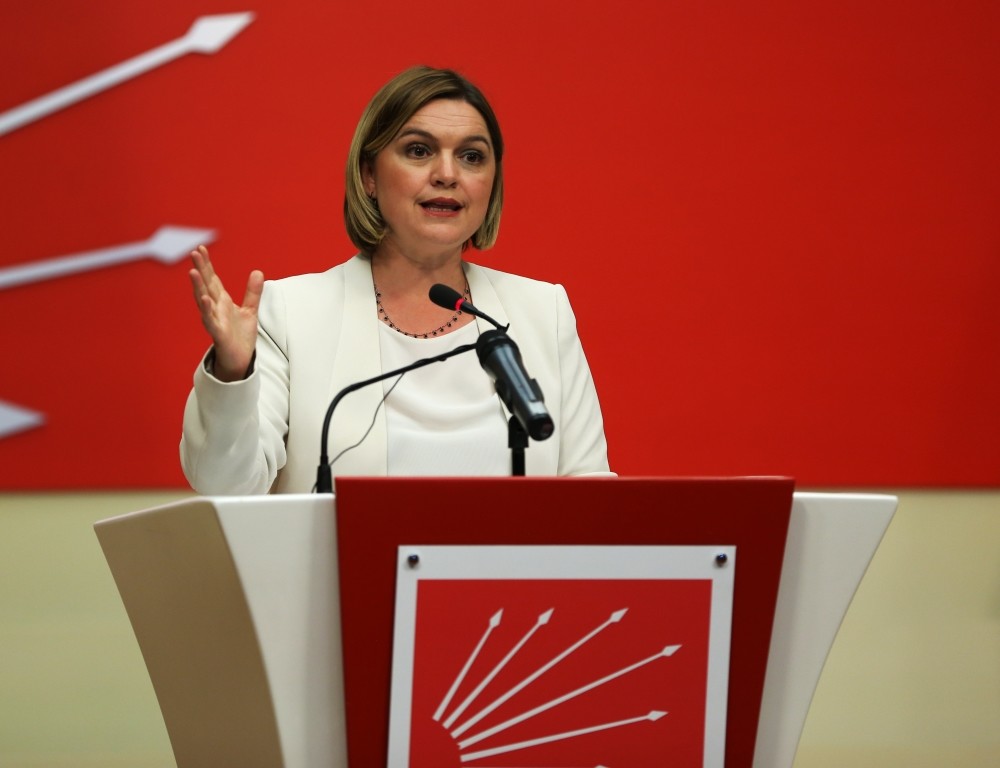 Bu00f6ke's resignation came as a shock for the party grassroots, and rumors are now swirling about Bu00f6ke's possible run for the chairmansip.
by Yunus Paksoy May 09, 2017 12:00 am

The tension between intra-party dissidents and party leadership gears up after party spokesperson and deputy chairman Selin Sayek Böke resigned from her duties in the main opposition Republican People's Party (CHP). Böke became the third prominent figure after Muharrem İnce and Fikri Sağlar to raise uproar in the CHP administration

Questions are being raised within the Republican People's Party (CHP) about whether former party spokesperson and deputy Chairman Selin Sayek Böke might have a shot at running for party chairmanship in the near future amid growing intraparty unrest. Böke, who has been a leading figure in the CHP, resigned from her duties over the weekend, which dealt another heavy blow to the already troubled CHP. The spokesperson's resignation came as a shock for the party grassroots and rumors are now swirling about Böke's possible run for chairmansip. The CHP has been locked in turmoil since the April 16 referendum that resulted in a victory for President Recep Tayyip Erdoğan and the Justice and Development Party (AK Party).

Dissenting deputies and some CHP members have been calling on current Chairman Kemal Kılıçdaroğlu to gather an emergency congress as soon as possible.

Tanju Tosun, an academic at Ege University who specializes in CHP politics said that Böke blew her chance at another opportunity for chairmanship in the party, saying: "The bylaws of Turkish political parties do not allow anyone to have success against the chairman. Therefore, neither Mrs. Böke nor anyone else has a chance against Kılıçdaroğlu, unless he decides to leave," Tosun contended.

"As a politician who believes in the universal principles of participatory democracy [and] social democracy, and who thinks that the road to libertarian democracy in Turkey is paved with these values, I do not find it appropriate to be part of the existing administration's mentality," Böke is quoted as saying. The former spokeswoman added that she would continue to serve as a lawmaker in parliament as a CHP party member.

Mustafa Altunoğlu, an academician at Anadolu University who also focuses his studies on the CHP said that Kılıçdaroğlu is very strong in his post at the moment. Stressing that Kılıçdaroğlu solidified his position in the party shortly after taking office, Altunoğlu said that CHP delegates are mostly on his side.

Tosun said that Kılıçdaroğlu will be able to manage the crisis until the 2019 elections. Underscoring that Böke made a strategic mistake by stepping down so early, Tosun asserted that she could have become the next chairman of the CHP if she had waited the situation out.

Altunoğlu said that Böke, İnce and former CHP Chairman Deniz Baykal's intraparty struggle against Kılıçdaroğlu is likely to fail. "We cannot foretell what will happen but it seems like Kılıçdaroğlu will hold onto his post," he said.

Böke had recently had a falling out with party administrators following the April 16 referendum. The former spokeswoman was involved in an intraparty debate after she suggested that the party boycott Parliament if the referendum results were legally compromised. Another CHP deputy, Levent Gök, corrected her statements within a few hours and Böke was harshly criticized during a party meeting.

Meanwhile, the CHP has sent one of its lawmakers to the party's disciplinary board for his criticism of the party's leader, seeking his dismissal on Sunday.

CHP Mersin deputy Fikri Sağlar was sent to the High Disciplinary Board for permanent dismissal in a decision taken by the party Assembly in which 38 members approved the dismissal and 19 said "no."

Following the CHP's Central Executive Board meeting on Wednesday, a request for a disciplinary investigation against Saglar was sent to the party's Assembly.