Erdoğan calls visit to US a ‘milestone’ in Ankara-Washington ties 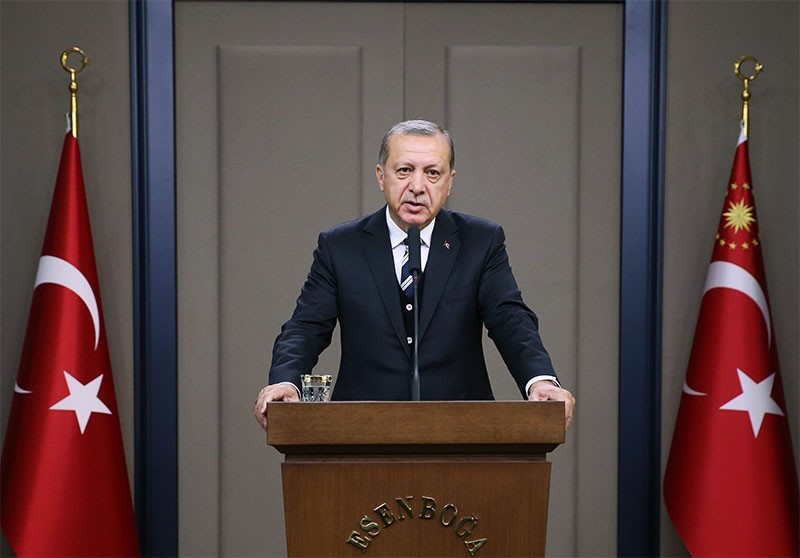 President Recep Tayyip Erdou011fan speaks to members of the press Friday before departing to China from Turkey's capital Ankara. (DHA Photo)
by Daily Sabah May 12, 2017 12:00 am

President Recep Tayyip Erdoğan, speaking at Ankara's Esenboğa Airport on Friday ahead of his visit to China, which will be followed by a visit to the U.S., described the visit to Washington as a "milestone" in the relations between the two countries, as the trip will mark the very first meeting between President Erdoğan and President Donald Trump since the latter took over the Oval Office. Addressing members of the media, Erdoğan also affirmed that the U.S.'s decision to arm the PKK's Syrian affiliate, the People's Protection Units (YPG), with heavy weaponry will be discussed during the meeting, while underlining that Turkey is determined to continue its efforts in counterterrorism operations both domestically and abroad.

Providing information on his visit to Washington next week, Erdoğan said, "Following my visit to China, I will travel to Washington where U.S. President Donald Trump and I will address significant matters and developments, with counterterrorism, Syria and FETÖ [Gülenist Terror Group] being primary matters." In regard to the recent decision on arming the YPG with heavy weaponry, Erdoğan said: "We have sent a delegation ahead to the U.S., and they have held meetings with officials. However, the highest level of discussions will be held between President Trump and me." While it has been claimed that holdovers from the former Barack Obama administration rushed President Trump to directly arm the PKK terrorist group's Syrian affiliates, the YPG and the Democratic Union Party (PYD), and fearing that Erdoğan could personally convince Trump otherwise, the Turkish President stressed that the U.S. is going through "a transitional period" in his remarks at Esenboğa Airport.

"America is going through a transitional period currently. Due to this transitional period, we [Turkey] must be more careful and sensitive here at home. Our expectations from the U.S. include previous unresolved matters, including the armed supported given to the YPG. This heavy weaponry is not ordinary weaponry … This is obviously a matter that is against the strategic cooperation we have with the U.S., and the developments are against our strategic agreements. We obviously do not want them to happen, thus we will address and discuss these issues," Erdoğan added.

Continuing on by affirming that Turkey is to continue its determined efforts in combating terror, President Erdoğan reminded that Turkey is the country that devotes the greatest effort in combating Daesh. "We do not think that terror groups can go hand-in-hand with the United States, and we do not approve of such. Similarly, we do not think that it is appropriate for Russia, either. However, I do believe that these issues can be resolved … Thus, I think that this visit [to Washington] will be groundbreaking," he stated. Additionally, regarding the YPG and regional matters, Turkey's President noted that he is to address the extradition of FETÖ leader Fetullah Gülen comprehensively with his American counterpart, as he added, "In my opinion, the United States of America should not become the hatchery of FETÖ."

Furthermore, President Erdoğan also emphasized the significance of his visit to China, where he is to also hold bilateral talks with various leaders, including Russian President Vladimir Putin. Erdoğan also said the China visit is to "put forth our country's strategic positioning. It will once more affirm that Turkey is indeed a real crossroad." Once the visits to China and the U.S. are complete, Erdoğan is set to attend the NATO Summit in Brussels. Regarding the NATO Summit, Erdoğan told the reporters at Esenboğa Airport that combat against terror is the primary topic on the agenda. President Erdoğan's remarks came following NATO's Secretary General Jens Stoltenberg recent statements saying that NATO will continue its support for the global coalition fighting Daesh but will not engage in combat operations in Syria or Iraq. Stoltenberg also said NATO members were likely to reach a decision on the issue at their Brussels summit, focusing on providing support to the global coalition with intelligence and training.

Meanwhile, Foreign Ministry Spokesperson Hüseyin Müftüoğlu told reporters on Friday that Ankara will evaluate its options regarding U.S. President Trump's decision to provide the YPG with heavy weapons after President Erdoğan's face-to-face meeting with Trump on May 16. Responding to a question about whether Turkey may shut down İncirlik Air Base, which is used by the U.S.-led coalition, Mütfütoğlu said that it would be "premature and unnecessary" to speculate about it. "We will have to wait for the meeting in Washington."