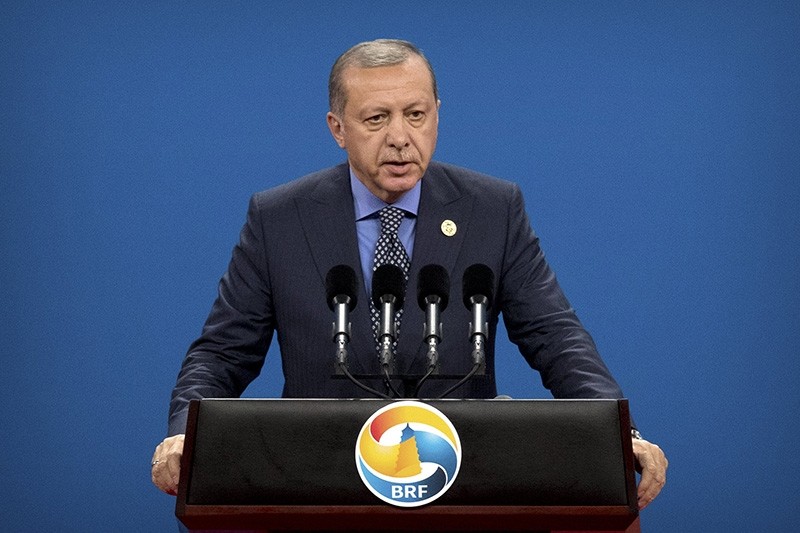 President Recep Tayyip Erdou011fan speaks during the opening ceremony of the Belt and Road Forum (BRF) at the China National Convention Center (CNCC) in Beijing, China, 14 May 2017 (EPA Photo)
by Daily Sabah May 14, 2017 12:00 am

The "New Silk Road" project will wipe terrorism off the face of the earth, President Recep Tayyip Erdoğan said Sunday at the opening ceremony of the Belt and Road Summit in China.

Speaking at the forum, Erdoğan highlighted the importance of the One Belt One Road initiative, also known as the "New Silk Road," saying that it would be one of the most important projects of the future, as it aims to connect Asia, Europe, Africa and South America and will enhance cooperation against terrorism.

"Turkey is ready to provide all types of support in this regard" the president said, noting that the initiative would be a global model for cooperation.

Erdoğan also noted that the initiative would contribute to the enhancement of infrastructure plans and technical standards in the countries along the route, and would also improve land, sea and air routes on a continental level.

The president emphasized that the promotion of inter-governmental cooperation was crucial in strengthening political cooperation, adding that cooperation in tourism, science, technology and media fields were also essential in reaching the goals of the initiative.