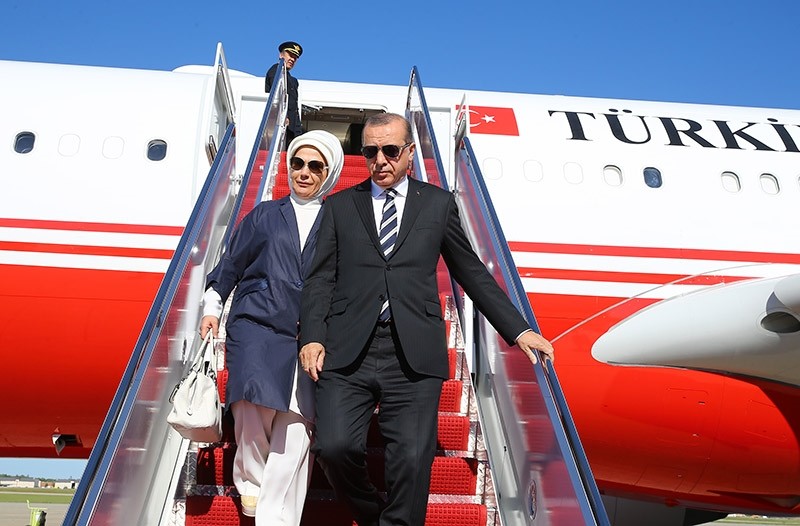 President Recep Tayyip Erdoğan and the Turkish delegation accompanying him arrived in Washington, D.C. on Monday where the Turkish president will meet his American counterpart Donald Trump.

Erdoğan is expected to meet Trump at 12:30 p.m. at the White House, according to a Turkish draft schedule for the visit.

Erdoğan and Trump will discuss the issues surrounding Syria, especially the U.S.' decision to directly arm terror organization PKK's Syrian affiliate the People's Protection Units (YPG), and the extradition dossier of Pennsylvania-based radical cleric Fethullah Gülen, who is accused of masterminding the failed coup in Turkey with his network of followers.

Speaking to journalists ahead of visits to China and the U.S., Erdoğan said that he would discuss the extradition of Fetullah Gülen with Donald Trump on May 16.

"There are some documents and information we have prepared, which we will present to him," said Erdoğan. "In my opinion, the United States of America should not be an incubation center for FETÖ."

FETÖ and its U.S.-based leader Gülen are accused by Turkey of being behind the defeated coup of July 15, 2016, which killed 249 people and left some 2,200 injured. It is also accused of infiltrating educational and other institutions both in Turkey and worldwide for its own ends, including subverting the state.

Erdoğan is also expected to discuss the issue of the U.S. arming the Syrian Democratic Forces (SDF), considered by Turkey as an affiliate of the PKK terrorist organization.

"These are contrary developments to our relations and strategic agreement with the U.S.," said Erdoğan. "We do not want those issues, [...] we will discuss them."

Erdoğan will also meet a group of think-tankers and regional experts. He will also come together with CEO's of leading American companies, and the head of investment funds to discuss investment opportunities in Turkey.