Witnesses reveal what actually happened outside Turkish embassy in US 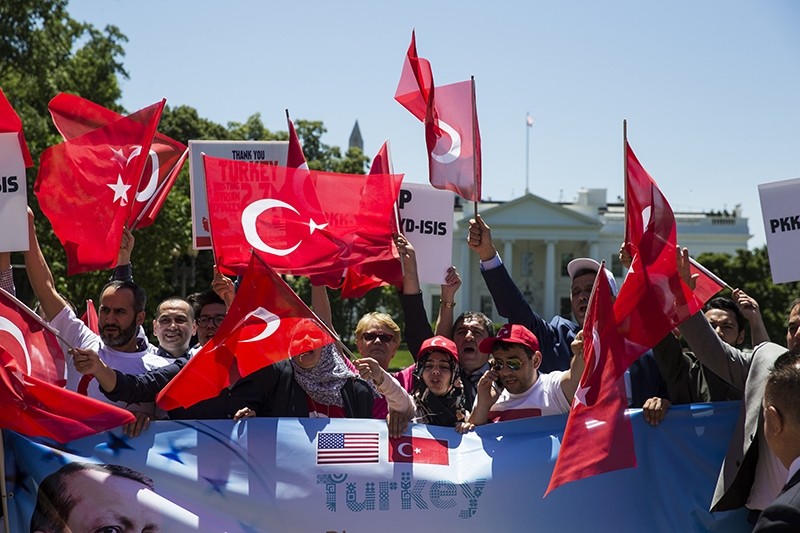 Supporters of the PKK terrorist organization -- a group which has killed over 1,200 people in Turkey since July 2015 -- triggered the melee and fight outside Turkey's Washington Embassy building during President Recep Tayyip Erdoğan's visit to the country on May 16.

An Anadolu Agency reporter was covering Erdoğan's visit, and says he was able to witness and observe what actually happened outside the embassy building.

A group of Turkish citizens, who were also there to support Erdoğan and Turkey, started to respond to the group's verbal harassment.

As the altercation started, Washington, D.C. Metropolitan Police and U.S. Secret Service Agents were also around. Turkish citizens were moved from the area by the police, but the PKK sympathizers stayed where they were. The Turkish citizens reportedly objected this.

Both groups shouted slogans and afterwards dispersed without incident.

President Erdoğan was expected to arrive at the Turkish Embassy at around 4 p.m. local time and PKK sympathizers gathered at the park next to the building half an hour earlier.

The supporters of the terrorist group, around 20 people, were carrying posters of Abdullah Öcalan, the PKK's jailed head, as well as jailed pro-PKK Peoples' Democratic Party (HDP) co-chair Selahattin Demirtaş, and flags of the Democratic Union Party (YPG), the armed Syrian offshoot of the PKK terrorist organization.

While shouting anti-Erdoğan slogans, the group started to swear at and insult Turks, who were just across the road. Turkish citizens responded with their own slogans.

As minutes went by, the group escalated the intensity of their swearing and insults against Erdoğan and Turkey supporters.

The protesting group had a permit to gather in front of the White House, but when they gathered outside the Turkish Embassy, they gave the police no notice.

No permit was required to gather outside the embassy. But the practice in the U.S. was to inform the police department so that they could take necessary safety measures. The Turkish group was reportedly worried about their gathering with no notice, if they were planning to make a scene.

The PKK supporters reportedly made a great effort to provoke Turkish citizens through their insults and swearing.

The first fight reportedly broke out when supporters of the terrorist group threw water bottles at Turkish citizens, triggering a 10-15 second fist fight in the middle of the road.

Only two police officers interceded in the fight, and it was clear the police were not ready for such a scene, as there were only around 10 police officers outside the embassy.

Also stepping into the fight, a Turkish citizen named Alp Kenan Dereci was severely injured when a PKK supporter hit him in the head with a megaphone. His face was covered in blood and he was taken to a hospital with an ambulance.

People who saw Dereci had been hit with a megaphone repeatedly told the police chief at the scene what happened and who hit him.

They told the police chief that it was not just a punch, but an attempted injury. The people also said that the attacker should be arrested or the situation could escalate.

But the police chief said he would not do such a thing, which triggered a bigger altercation because the attacker, who was not arrested, continued with his swearing and insults.

It was later reported that the attacker was named Kasim Kurd, who was being sought by both federal agents and the D.C. metropolitan police.

Police did not heed the warnings and complaints of Turkish citizens, but instead forced the Turkish supporters back onto the sidewalk.

The police also barricaded Turkish citizens after the first altercation, but not the PKK supporters.

With no obstacles to block them, the terrorist group backers got very close to Turkey supporters and shouted slogans and threw water bottles.

The PKK supporters, who kept a greater distance during Erdoğan's White House visit, outside the embassy were able to get within 15-20 meters of him.

When Erdoğan arrived at the embassy building, protesters continued their grave insults, so some Turkish citizens and the head of the president's security detail stepped in.

After security interceded, the group dispersed.

Meanwhile, the U.S. media, instead of covering the moments that triggered the situation as a whole, chose to show only the last moments, and so created the impression that Turkey supporters caused the altercation and the terror group supporters were the victims.

Alp Kenan Dereci, a dual Turkish/Canadian citizen whose head was injured by PKK supporters during President Recep Erdogan's May 16 visit to the United States, spoke to Anadolu Agency about what happened that day.

Dereci, who had traveled from Toronto and was with Turkish citizens gathered to see Erdogan in Washington, said the real victims of the brawl were the Turkish supporters.

Dereci was one of the people injured by PKK supporters and some Armenians during the brawl outside the Turkish Embassy the day Erdogan met with U.S. President Donald Trump.

"We told the police officers about the PKK supporters' insults and swearing, but the police weren't interested, and every time told us that everything was under control," Dereci said.

Dereci said that after the assault, his face was covered in blood, and he needed to get 17 stitches to his head at a local hospital, and he had broken teeth.

"It was like they had planned it. Even though we warned the police about the group's bad intentions, they didn't do anything to intercede," he said.

He added that supporters of the terrorist group were also waiting outside the hospital "just to make another scene."

"There was another group of people holding cameras so that if a brawl had started, they would have recorded it too," Dereci said. "The thing I don't understand is that the media is painting the PKK supporters as the victims. We were openly assaulted, but they don't show that part."

After the incident, the Turkish Embassy released a statement saying, "Groups affiliated with the PKK, which the U.S. and Turkey have designated as a terrorist organization, gathered yesterday without permit in Sheridan Circle in the immediate vicinity of the Ambassador's Residence, while the President of Turkey was visiting the Residence.

"The demonstrators began aggressively provoking Turkish-American citizens who had peacefully assembled to greet the President. The Turkish-Americans responded in self-defense and one of them was seriously injured. The violence and injuries were the result of this unpermitted, provocative demonstration. We hope that, in the future, appropriate measures will be taken to ensure that similar provocative actions causing harm and violence do not occur."