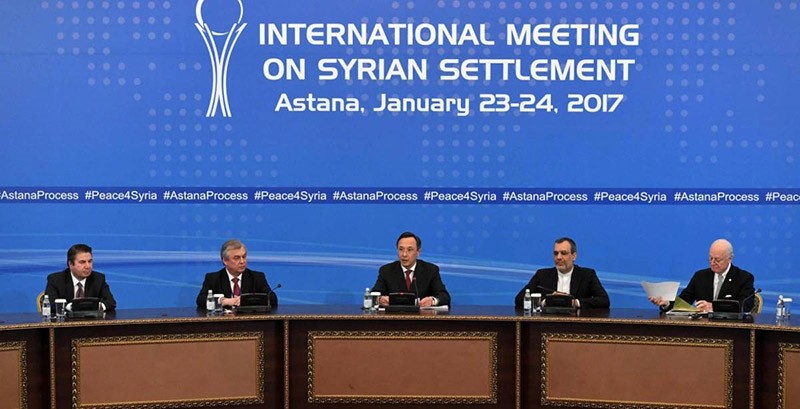 President Recep Tayyip Erdoğan has called on the U.S. and Saudi Arabia to join the Astana talks to help bring peace to Syria.

The negotiations were launched by Turkey, Russia and Iran in January when representatives of the Assad regime and opposition groups were brought together in the capital of Kazakhstan.

"We have worked with Russia and Iran during Astana talks," Erdoğan told Portuguese broadcaster RTP in an interview late Thursday. "We are calling for Saudi Arabia and United States to take part in those talks."

The U.S. ambassador to Kazakhstan, George Krol, had previously attended the talks as an observer.

The president said the new administration in Washington had resulted in "different approaches towards Iran" from those adopted under the former U.S. government.

On Turkey's approach to Tehran, which supports the Assad regime while Ankara backs the opposition, Erdoğan said there were issues on which Turkey "gets along with Iran" and others where it did not.

"This does not mean that Turkey has the same approach to Iran as the United States," he said.

"You cannot solve issues in Syria and in Iraq without Iran. The [Assad] regime works with Iran. I see that denominational expansionism as Persian expansionism. I do not find this right."

A cease-fire in Syria brokered by Turkey and Russia led to the Astana talks, which are being held parallel to UN talks in Geneva to find a political solution to the six-year conflict.

A fifth round of talks had been due to start in Astana on Monday but was postponed. A fresh date is yet to be set.

Erdoğan also addressed Turkey's support for Qatar as the country faces a diplomatic and economic blockade by Arab states including Saudi Arabia, Egypt, the United Arab Emirates, Bahrain and Yemen.

"I see that the blockade against Qatar is not right," he said. "We did not accept any kind of embargo against Qatar. I have made lots of phone calls with other world leaders to explain the issue to them."

He added: "Qatar is a country in which most of its population are Muslims. The blockaders are also Muslims. A Muslim to another Muslim must not implement such a blockade in the holy month of Ramadan.

"[Saudi] King Salman should be able to resolve this issue before the end of the holy month of Ramadan" Erdoğan added.