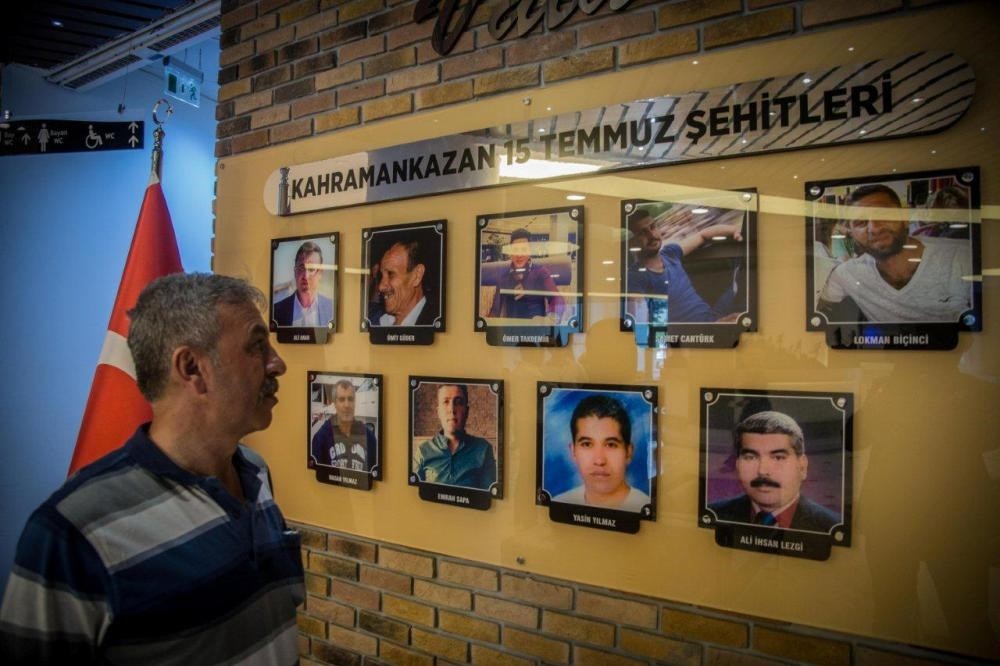 Cengiz u00d6ztu00fcrk is look at a showboard in the Kahramankazan Municipality Building where the names and photographs of people killed from the district during the coup attempt are exhibited.
by Yunus Paksoy Jul 15, 2017 12:00 am

Losing nine of its residents during the resistence, the Kazan district was turned into Kahraman (Hero) kazan after its residents showed legendary heroism against the coup plotters

A small district some 50 kilometers (31 miles) away from the capital city of Ankara helped change the fate of Turkey on the night of the coup attempt. The story of how the Kazan district turned into Kahraman (Hero) kazan on July 15, 2016 has the blood, sweat and tears of the nine people that were killed and the scores that were injured.

Cengiz Öztürk, a 48-year-old resident of Kahramankazan, has been struggling to get over the trauma of that night for the past year. The images of his friend's head being ripped apart by a bullet still haunt him. 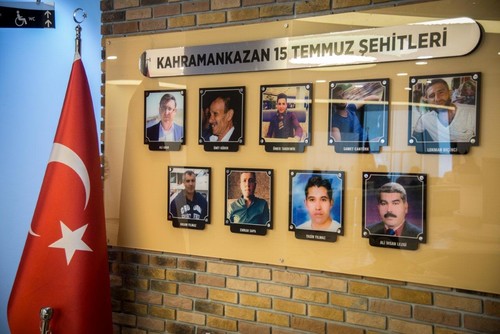 "We were drinking tea on the balcony of our house. We were told that a coup attempt was being staged against the president. We, as four friends, rushed to Esenboğa Airport. It was impossible to enter the airport since it was too crowded," Öztürk remembers. "Then we were told to leave for Akıncı Air Base. It was said that jets were taking off from there to bomb civilians."

Haydar Ünal, a 43-year-old real estate agent, was just having another hot summer night at home. Little did he know a few hours later he would witness the shooting of his son. Ünal's night suddenly took an unexpected turn when he switched on the TV.

"I saw the news presenter reading the coup declaration on TRT [the state-run TV channel]. We gathered in front of the municipality building. Then we headed to Akıncı [Air Base]. They were reportedly flying jets from there to bomb the presidential complex," he recalled.

What brought Öztürk and Ünal together at Akıncı Air Base, two fellow Kahramankazan residents, were the reports about fighter jets taking off to "crush anyone standing in their way." Neither wasted a second rushing to the scene.

"We were not there for personal interests or gains. We went there for the sake of our motherland," Ünal said.

The atmosphere there was tense with putschist soldiers standing in front of the air base's gate yelling at the thousands of gathered Kahramankazan citizens, telling them to leave. Öztürk still remembers the conversations with the soldiers vividly.

"What is happening here? I asked. Based on the experience of my time at the army, I knew they were taking a hard line with us," Öztürk said.

He told his friend afterwards, "Dude, they will shoot at us."

None of the civilians flocking to the air base ever imagined that the members of the Turkish army would actually open fire. The putschist soldiers were repeatedly telling them to leave.

"We had no fear in us. Were our soldiers going to shoot at us? Why would they? We are not terrorists," Ünal said.

Unfortunately, Ünal and Öztürk were wrong. The 249 people who were killed and the more than 2,000 wounded victims of brutal putschist soldiers were also wrong.

"Maybe 30 soldiers aimed at us and started firing. Some of the people next to me were immediately martyred," Ünal recalls.

Still in shock from the soldiers' hostile reaction, Ünal turned his head to the left just in time to see his son take a bullet.

"'Dad! I've been shot' my son said. My world collapsed on me at that moment. I just got down to cover his body with mine to protect him from the bullets." 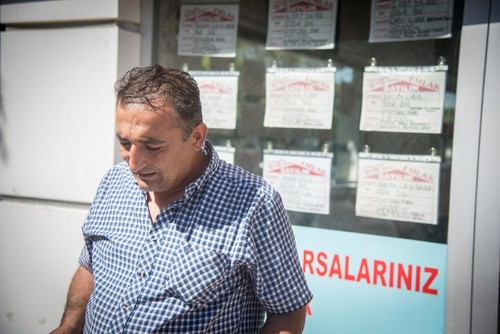 "I saw our village headman Ali Anar while I was crawling on the road after they started firing. Half of his head was gone. The other half was covered in blood. When I looked the other side, I saw Samet, a very young, decent guy. When he held up his hand to tell me that he was wounded he took the second bullet. He died immediately," he recalled, trying very hard to not burst into tears.

It took hours to rush the wounded in front of the Akıncı Air Base to hospitals. Ünal remembers getting in a car with five others to find a hospital.

"Five of the six in the car were wounded. We did not feel any pain. We were not scared," he said.

The horrors that Öztürk experienced did not end there.

"There were people on the floor of the hospital who had lost their arms and legs. The doctors there made great sacrifices that night," he explained.

Öztürk and Ünal are only two among the thousands of Kahramankazan residents who had to endure violence at the hands of the putschists. A year after the attempt, Öztürk and Ünal still cannot let go of the disheartening memories.

The 48-year-old, Öztürk, said he received 45 days of psychiatric treatment at a hospital.

"My treatment is still ongoing. That night left me no choice but to shut down my business. My wife filed for divorce from me as well," he said.

Likewise, Ünal's life for the past year has not been the same.

"I am proud. I took a bullet for my motherland," he said as his eyes shined with pride.

The July 15 coup attempt, believed to have been carried out by members of the Gülenist Terror Group (FETÖ), devastated the lives of thousands of people. Weapons, tanks and jets of the Turkish army were directed at the Turkish people, leaving deep scars in the hearts of millions of citizens.

Looking at a commemoration corner set up in the Kahramankazan municipality building, Öztürk describes the event as an attempt to invade Turkey.

"I experienced the 1980 coup in Turkey as well. It was something different," Öztürk said. "It was an invasion attempt."

Kahramankazan and Akıncı Air Base have already taken their place in the history of the Republic of Turkey. Chief of Staff Gen. Hulusi Akar and military brass opposing the coup were held by coup plotters and fighter jets took off for airstrikes against any place resisting the coup. The air base is still home to many mysteries of the coup attempt still waiting to be solved.

As for the small district of Kahramankazan, it is likely to be remembered for decades to come for its astonishing bravery during the coup bid. Apart from thousands of people gathering in front of the Akıncı Air Base, many people piled up hay bales of hay and set them on fire in an attempt to limit the visibility of aircraft. Some residents even set their crops on fire and others tried to force their way inside the base.

Nine people were killed and 92 others injured that night in the district. The memories of the fallen residents of Kahramankazan can be seen in every corner of the district on the first anniversary of the failed coup attempt. 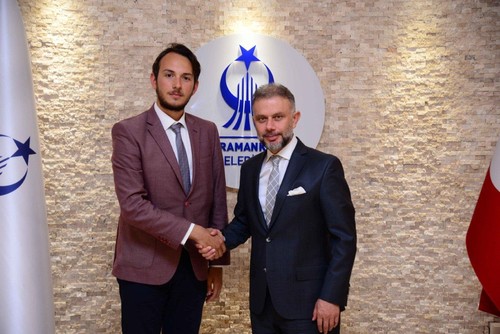 Kahramankazan Mayor Lokman Ertürk played an important role on the night of the coup attempt in terms of mobilizing the people and using municipality services to prevent putschists from causing more damage.

Mayor Ertürk recalls urging the municipality to send text messages to every resident calling them to gather in front of the district square and from there head off to Esenboğa Airport and Akıncı Air Base. The mayor said they did not know the commander of the air base was part of the coup attempt.

"We did not know yet that the air base was one of the headquarters of the coup attempt. I called Brig. Gen. Hakan Evrim to learn what was going on, but he did not return my calls despite repeated attempts. Later on, we learned that he was with the putschists," Ertürk said.

He added that he sent Evrim text messages to stop the coup attempt and put an end to killing civilians. The putschist general did not text him back either.

Talking about the efforts made that night to prevent putschists from taking off from the Akıncı Air Base, Ertürk said he ordered the municipality employees to cut off the electricity supply.

"Only three fighter jets could take off after our efforts. Twenty-five had taken off before we arrived," he said.

A year after the attempt, the Kahramankazan mayor speaks proudly of the municipality's ongoing efforts since the attempted coup.

"We started taking care of the families of our martyrs and the wounded on the morning of July 16 to set an example for all of Turkey," Ertürk said, adding that a team of 110 people was set up to take care of whatever the families may need.

"The relatives that our martyrs left behind are our families now," the mayor said, ensuring that the municipality will continue to provide anything that they may need in the future.

While Kahramankazan works to heal the wounds left from the coup attempt, the Ministry of Culture and Tourism and the Kahramankazan Municipality are working on a museum and monument to memorialize the efforts of the people and to remember that night for generations to come.

"I would like to stress that our efforts are rapidly ongoing for the Museum of July 15 Martyrs and Democracy. The museum will open on July 15, 2018," Ertürk said, adding that what was witnessed on July 15,2016 will be told and displayed in the museum.