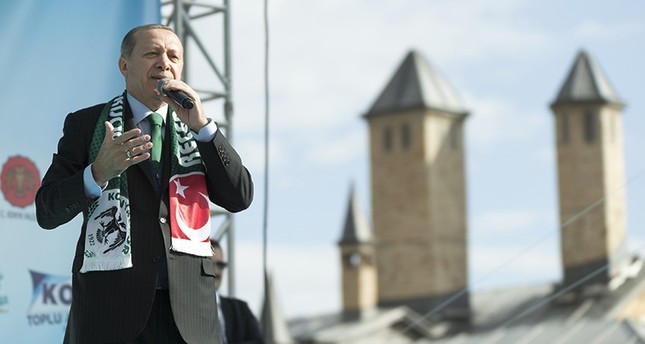 No one should be surprised if Turkey's year-end growth in 2017 rate hits 7 percent, President Recep Tayyip Erdoğan said Saturday.

Speaking before a large crowd gathered for an inauguration ceremony of municipal services in central city of Konya, Erdoğan said that Turkey had grown by three times in the last 15 years, and added that the switch to the presidential system, which was introduced with a referendum on April 16, will accelerate growth.

Erdoğan also reiterated that Turkey will maintain its presence in Iraq, Syria, Africa or the Balkans since it has humanitarian and historic ties to all of these regions, and criticized those who question Turkish interest in these areas.

The president also thanked the people of Konya, a traditionally conservative city, for their strong support since the day the ruling Justice and Development (AK Party) was founded. Erdoğan underlined that Konya had backed the presidential system with a 73 percent voter support.

Prime Minister Binali Yıldırım also attended to the ceremony, noting that the 50 projects, to be inaugurated through the ceremony, have a total investment cost of 1.4 billion Turkish liras.