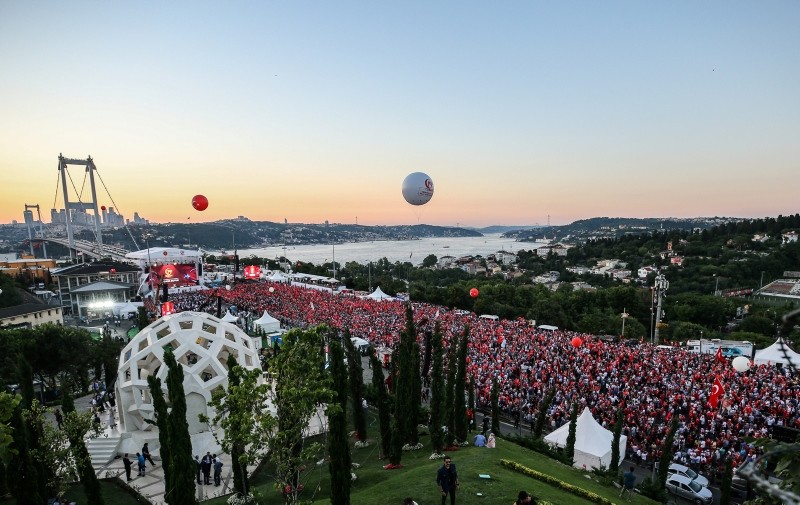 Nationwide ceremonies to mark the second anniversary of the July 15, 2016 foiled coup attempt and to commemorate the fallen heroes who died while protecting democracy against the coup plotters were held yesterday with millions of citizens and top officials in attendance.

Gathering in districts on the Asian side of Istanbul earlier Sunday, including Beylerbeyi, Çengelköy, Altunizade and Kısıklı, millions of people marched to Istanbul's iconic July 15 Martyrs' Bridge to attend commemoration events. The July 15 Martyrs Bridge was closed to traffic at 2 p.m. local time as part of the ongoing preparations for the commemoration ceremonies. The bridge across the Bosporus that connects the European and Asian sides of Istanbul, is part of the planned National Unity March, starting at 6 p.m. President Recep Tayyip Erdoğan joined millions of people gathered on the bridge over the Bosporus.

Speaking on the bridge, Erdoğan said that the July 15 coup attempt has proved Turkish democracy's maturity and the nation has closed the chapter of coups, never to be reopened again.

The president also vowed not to forget certain countries who kept silent during the coup night instead of showing support for Turkish democracy.


On the night of July 15, 2016, a small military junta, accused of being members of the Gülenist Terror Group (FETÖ), tried to overthrow the democratically elected government and assassinate Erdoğan, who was on holiday in southwestern Muğla province. Coup plotters, who used heavy weaponry, including fighter jets, helicopters and tanks, against pro-democracy people that poured onto streets, killed 250 people and wounded more than 2,200.

The Bosporus Bridge was one of the first locations secured by coup plotters in the initial stages of the coup attempt. Dozens of people who rushed to the bridge to prevent coup plotters from controlling the bridge at midnight were killed by snipers, gunshots and tanks on the bridge before the soldiers surrendered. The bridge, formerly known as the Bosporus Bridge, has been renamed the July 15 Martyrs' Bridge to commemorate the civilians who lost their lives there.

Erdoğan's program began earlier in the day with a commemoration at Ankara's Beştepe Millet Mosque, followed by the opening of the July 15 Martyrs' Monument at the presidential complex. The ceremony was attended by Erdoğan, many top officials and families of the victims and survivors of the failed coup attempt. Erdoğan recited verses of the Quran in memory of the victims.

Parliamentary Speaker Binali Yıldırım, who was one of the top figures of the coup night, also attended a ceremony in Ankara where he said that they want to keep alive the spirit of July 15 and make the brotherhood, unity and solidarity of all Turkish citizens everlasting.

Speaking to reporters after his visit to the Karşıyaka Martyrs' Cemetery, Yıldırım commemorated martyrs who devotedly sacrificed their lives to protect the nation.

He then joined a program in Parliament and opened an exhibition on the coup attempt. Yıldırım initially thanked the parliamentarians who came to Parliament on coup night despite the assault by putschists. "This is the day of victory for our nation, state and democracy," Yıldırım said in Parliament.

During the coup night, pro-coup F-16 and helicopter pilots bombed many government buildings, including Parliament, the Presidential Complex and the headquarters of the National Intelligence Organization (MİT). Two bombs were dropped on Parliament at midnight, destroying a hall. The bombed area was later renamed Şeref (Honor) Hall. Deputies from all political parties gathered in Parliament after the audacious attack to join the people's resistance.

Then-Prime Minister Yıldırım was on the Asian side of Istanbul when the failed coup attempt took place. Along with Erdoğan, Yıldırım called on citizens to take to the streets to resist the attempt.

He then decided to return to Ankara immediately. Yıldırım chose to go by car due to security concerns over traveling by air. FETÖ-linked gendarmerie forces opened fire on his convoy; thus, he changed his route several times.

Senior civil and military officials in western Izmir province visited the martyrs' cemetery as part of July 15 Democracy and National Unity Day. Events were also organized in other cities to commemorate victims.