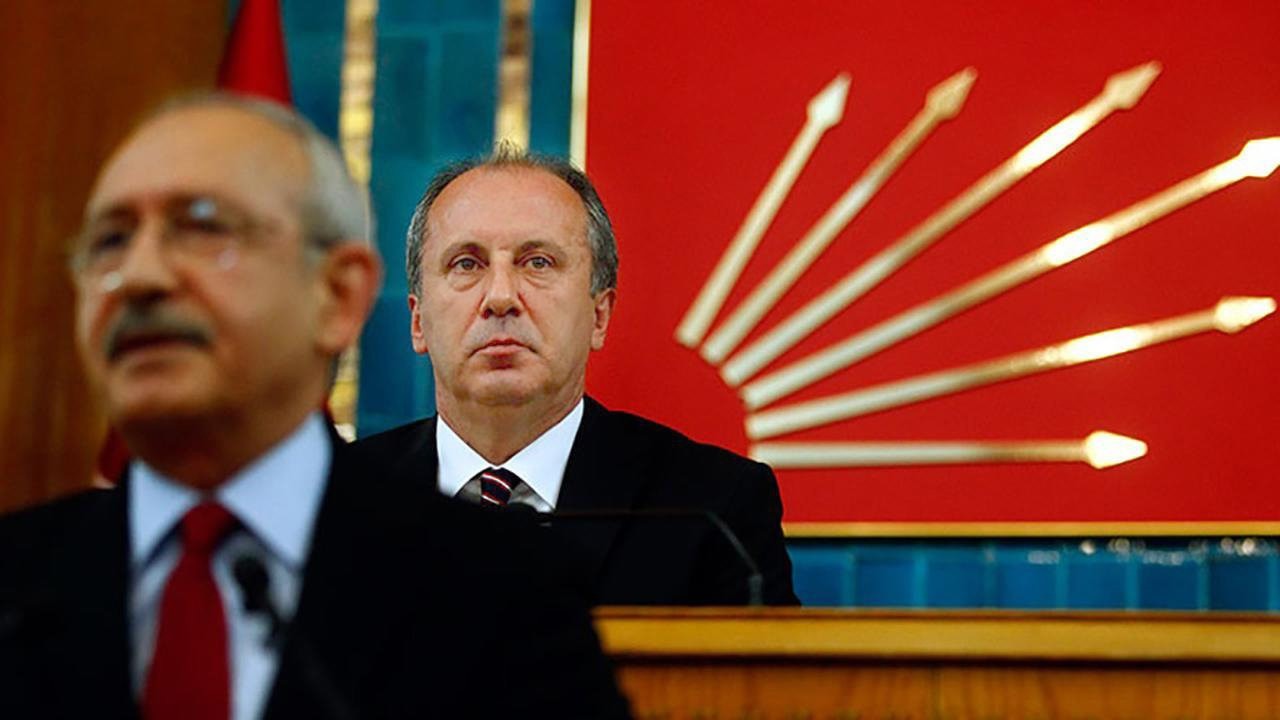 Muharrem u0130nce (R) received 30 percent of the votes in the presidential elections, eight percentage points more than the CHP in the parliamentary elections.
by daily sabah
Jul 17, 2018 12:00 am

Supporters of the CHP presidential candidate launched a petition to convene an extraordinary congress, aiming to replace the party's leadership, including CHP Chairman Kemal Kılıçdaroğlu

The leadershıp debates within the main opposition Republican People's Party (CHP) have reached their peak as the dissidents supporting Muharrem İnce officially launched a petition to call and convene an extraordinary convention by submitting their signatures. "We are demanding an extraordinary convention. Our congress delegates started to go to the notaries to submit their signatures," Yaşar Tüzün, CHP's Bilecik deputy said yesterday in a press conference in Parliament along with CHP Party Assembly member and former deputy Gaye Usluer and other convention delegates.

Muharrem İnce was declared as the party's presidential candidate for the June 24 elections. He received 30 percent of the votes in the presidential elections, falling behind the winner, President Recep Tayyip Erdoğan. Yet, support for İnce surpassed the support for the party by 8 percentage points in the parliamentary elections.

İnce, who had voiced desire to lead the party previously, has failed twice in his bid for party chairmanship, against the incumbent leader of the party, Kemal Kılıçdaroğlu. İnce and his supporters say the repeated election failures of the CHP are a result of bad leadership in the party and that Kılıçdaroğlu must be replaced.

Tüzün added that they believe the necessary number of signatures will be reached since over a hundred signatures were collected in just a few hours. He announced that the name of the convention will be the "convention of hope and change."

"If we could have presented an efficient opposition, we would not have to make this call [for a convention] today," Usluer said, highlighting the need for a change within the CHP. "For nine years we have observed that it's not possible to apply the same strategy and expect different results."

She stressed that Chairman Kılıçdaroğlu is responsible for the party's current situation and that the policy his administration pursued completed its political lifespan.

The statements of CHP members indicated that there is no off-ramp at this stage as party descended into the leadership debates and official process have begun. Kılıçdaroğlu has failed to avert the intraparty conflict after the June 24 parliamentary and presidential elections.

According to the CHP bylaw, 634 signatures have to be collected and submitted to headquarters within 15 days. If this happens, the CHP is obliged to hold an extraordinary convention within 45 days.

CHP spokesperson Bülent Tezcan commented on the demand for a congress yesterday saying that the necessary number of signatures will not be gathered according to their observations.

"A significant part of the party base has been stating that it is not right to hold a convention right now," Tezcan said.

Following the elections, İnce once again voiced his intention to run for the party's top post, building on the support he gained during the presidential race, which he lost but was 8 percentage points ahead of the party itself.

Previously, in a meeting between İnce and Kılıçdaroğlu following the elections, İnce said he offered Kılıçdaroğlu an honorary party chairmanship position and suggested he takes over as actual chairman.

Kılıçdaroğlu described İnce's words as "political impoliteness," saying it was a private matter between the two and İnce's move was abnormal in terms of political etiquette.

Meanwhile, İnce visited the party's Istanbul provincial head Canan Kaftancıoğlu in apparent move to gain her support. İnce conveyed his opinions regarding the ongoing process while Kaftancıoğlu reportedly expressed that she believes a convention would harm the party ahead of the local elections.