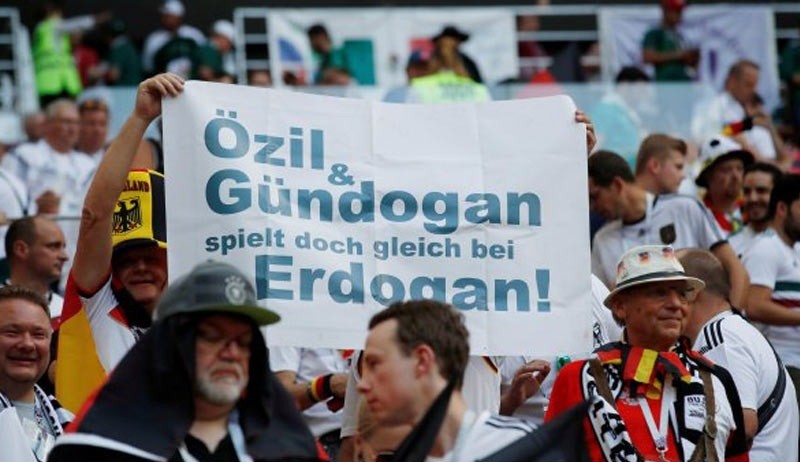 Mesut Özil's decision to retire from the German national team shows how football in Germany has become a platform for racist sentiments against players from minority backgrounds, making the country unfit to host the Euro 2024 as it violates the UEFA's ‘No to Racism' campaign

Awarding Germany the right to host the 2024 European Football Championships will be tantamount to rewarding racism, especially as football has become an open ground for politicians and officials to flaunt their racism and attack German players from minority backgrounds. The noxious environment in Germany for players with non-German backgrounds once again became top news over the weekend after Mesut Özil, the German star of Turkish origin, announced his decision to retire from international football, citing "racism and disrespect." Özil, 29, spent nine years in the national team, earned 92 caps and scored a World Cup win.

He was attacked after the team was eliminated in the first round of the 2018 World Cup held in Russia. Germany and Turkey have both bid to host the European Football Championships in 2024. The winner of the bid will be decided by Europe's football body on Sept. 27, 2018, in Nyon, Switzerland. However, with the rise of the far-right AfD party and the move to the right, evident in the mainstream German politics, the country has become an anathema to UEFA's "No to Racism" campaign, which aims to eliminate racism, discrimination and intolerance from football. The attacks on Özil over the past few weeks, culminating in yesterday's distasteful reactions to Özil's announcement, make it evident that the country is definitely unequipped to be given the responsibility to host an international tournament.

Leading German daily, Bild accused Özil of "pure self-pity" and its editor highlighted his decision to post in English, accusing him of trying to maximize his audience.

Alice Weidel, leader of the AfD, wrote that: "The integration dream doesn't work even with football millionaires," describing Özil's "tirade" as a "typical example of failed integration."

German Football Federation (DFB) President Reinhard Grindel, who lodged the German application to host the 2024 championships, and the national team's General Manager Oliver Bierhoff were the main sources of criticism directed at Özil in the recent weeks, accusing him of being the main culprit in the recent world cup fiasco.

The German government, meanwhile, tried to lament the departure of one of the most internationally respected members of the national team but misidentified the problem.

Chancellor Angela Merkel's spokeswoman Ulrike Demmer said the chancellor respected Özil's decision. "The chancellor values Mesut Özil highly. He is a great footballer who has contributed a great deal to the national team," she said, adding that the majority of the roughly 3 million people with Turkish roots who live in Germany were well-integrated as if the problem was Özil's failure to integrate.

The problem wasn't that Özil was not well integrated, which he was as a star player in the German national team who often participated in charitable events and openly said he felt German, but that despite his integration into the society, he was not accepted as a German and was constantly disparaged as an outsider by other Germans of influence.

Foreign Minister Heiko Maas said yesterday that he did not believe "the case of a multi-millionaire living and working in England gives information about the ability to integrate in Germany," reflecting the calculated opinion of the German government and showing why Özil took such a decision in the first place.

Other German players of minority backgrounds also have felt unwanted in recent years. Jerome Boateng, 29, was attacked in 2016 by AfD's deputy leader Alexander Gauland, who said ordinary Germans would not want to have Boateng as a neighbor. Boateng, who captained the national team, is of Ghanaian background.

Boateng, who at the time said racism is still an issue in Germany, was among those who supported Özil's decision to quit the national team.