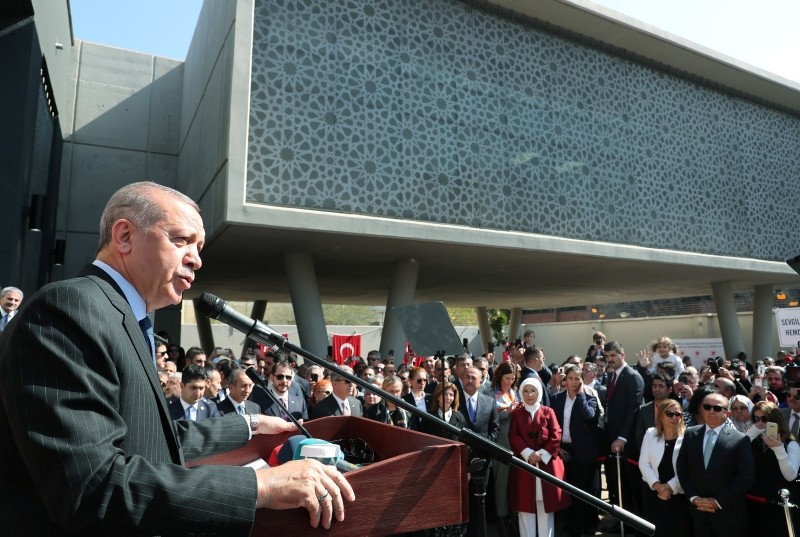 Turkey will not allow the Gülenist Terror Group (FETÖ) to turn South Africa into one of its bases, President Recep Tayyip Erdoğan said Thursday.

Delivering a speech during the inauguration ceremony of the new Turkish embassy building in Pretoria, South Africa, President Erdoğan said that Turkey is determined to not let FETÖ use South Africa as a base. "One of the countries where FETÖ is the most influential in the world is unfortunately South Africa, and I will give [South Africa] new documents and will not allow FETÖ to make it a base," the president said.

Stressing that FETÖ poisons South Africa, Erdoğan said: "We continue our struggle against FETÖ. We cannot overlook FETÖ's abuse of the legal system of South Africa. This organization is a dirty, treacherous structure that injects its poison. We will fight together against FETÖ in South Africa we will continue to support African countries until the last FETÖ member is caught."

The president underscored that South Africa may also be posed with the threat that Turkey faced on July 15, 2016, as the terrorist group attempted to carry out a coup d'etat.

Erdoğan went on to comment on Turkey's growing number of embassies and consulates throughout Africa. Explaining that the number of Turkish embassies was 12 when he came into power, he said the number has now risen to 41.

The president also asserted that apart from opening embassies, the Turkish states helped African people receive support by way of the Turkish Cooperation and Coordination Agency (TİKA), Anadolu Agency and Turkish Airlines. "Efforts of civil society organizations in reaching this level of Turkey-South Africa relations can never be ignored. Currently at the point of aid to the least developed countries in the world, Turkey ranks first with $8.2 billion," he said.

Recently, a FETÖ plot against Turkish businessmen and a nongovernmental organization was thwarted as the terrorist group attempted to defame the aforementioned people and have them imprisoned.
Last Update: Jul 26, 2018 6:16 pm