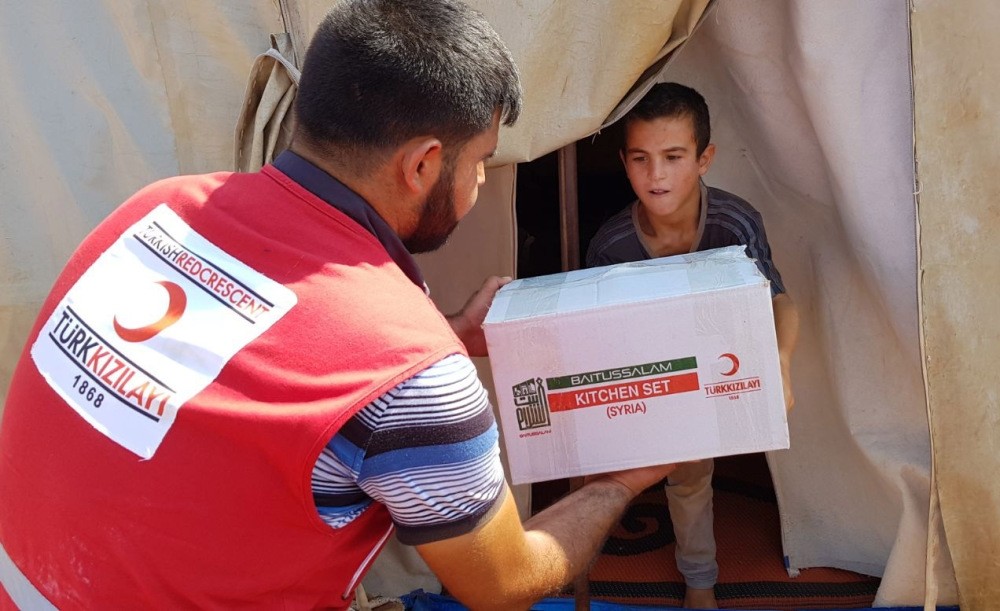 Turkey has extended its humanitarian efforts in Idlib, with several Turkish aid agencies sending aid to the region

As the tension in the northwestern Syrian province of Idlib escalates, Turkey has continued to increase its humanitarian relief efforts in the region to prevent a possible civilian tragedy.

When it comes to humanitarian aid, the Turkish Red Crescent (Kızılay), which has so far sent 145 trucks loaded with humanitarian aid to the region over the last month, is a leading Turkish aid agency. The aid agency has already delivered dry food, stationery, bread, medicine and clothes to needy people in the countryside of Idlib and the Latakia provinces. Speaking to Anadolu Agency (AA), Hakan Sarı, head of the border assistance operation at Kızılay, said they have been sending aid to needy people in Syria since 2011, when the civil war broke out in the country.

"In total, 145 trucks loaded with humanitarian aid have been sent to needy people, particularly in the Türkmendağı and Jabal al-Akrad regions of Idlib and the Latakia countryside, over the last 30 days thanks to our foundation and philanthropists," Sarı said. "The aid efforts will continue," he added.

The Turkish Red Crescent is not the only humanitarian agency from Turkey that conducts relief work in the region. A 20-truck convoy carrying humanitarian aid for Idlib set off from Istanbul yesterday, the president of another Turkish aid agency said. This is the first group of the 1,000 trucks of humanitarian aid for Idlib, Bülent Yıldırım, the president of the Istanbul-based Humanitarian Relief Foundation (IHH) told reporters during the event. "The tragedy that would occur in a possible [military] operation in Idlib is not only Turkey's problem but Europe's as well," Yıldırım said. "Our goal is to send 1,000 trucks to Idlib," Yıldırım said, adding the agency was working across Turkey for this aid campaign. "Today, we started with 20 trucks," he added.

Meanwhile, calling for common sense for Idlib, where the tension escalates day by day, Ankara plans to bring up the issue in the United Nations General Assembly. Ankara expressed that after a possible attack on the province, almost 1 million people could be displaced, causing a new influx of refugees that Turkey cannot ignore.

On Saturday, President Recep Tayyip Erdoğan emphasized that Turkey cannot host any more refugees from Idlib, where 3.5 million people live, including an estimated 1.5 million internally displaced refugees coming from other parts of the country, in the case of a large-scale offensive by the regime backed by Russia and Iran.

Since a 2011 uprising evolved into an all-out civil war in Syria, its northern neighbor Turkey has seen an influx of thousands of displaced people taking shelter in its border towns. Today, the country has more than 3.5 million Syrian refugees, the largest Syrian refugee community in the world.

Turkey's humanitarian efforts are being praised by former Syrian generals who have taken refuge in Turkey, as well, and say that Ankara's stance concerning Idlib will bring peace to the region.

"The only peaceful province that is left in the region is Idlib. Before the civil war, the population of the province was 1 million; however, the population increased to 4 million when people from Eastern Ghouta, Aleppo, Homs and Hama fled to the province," said one of the former commanders of the Bashar Ashad regime, Brig. Gen. Abdulkarim Ahmad, who currently lives in the southern Anatolian province of Hatay.

Underlining that any kind of attack that targets civilians in Idlib would be a disaster, Ahmad said that Turkey's efforts are crucial for the peace in Idlib. "I am thankful to Turkey, which has stood by the innocent and victims from the very beginning of the war. Only Turkey has watched our backs," he added.

Another former commander of the Syrian regime, Asad Nasif, also expressed his thanks to Turkey for helping Syrians. "Syrian people gathered in Idlib, which they saw as their only salvation point; however, now, these people are facing an even bigger threat," Nasid said.