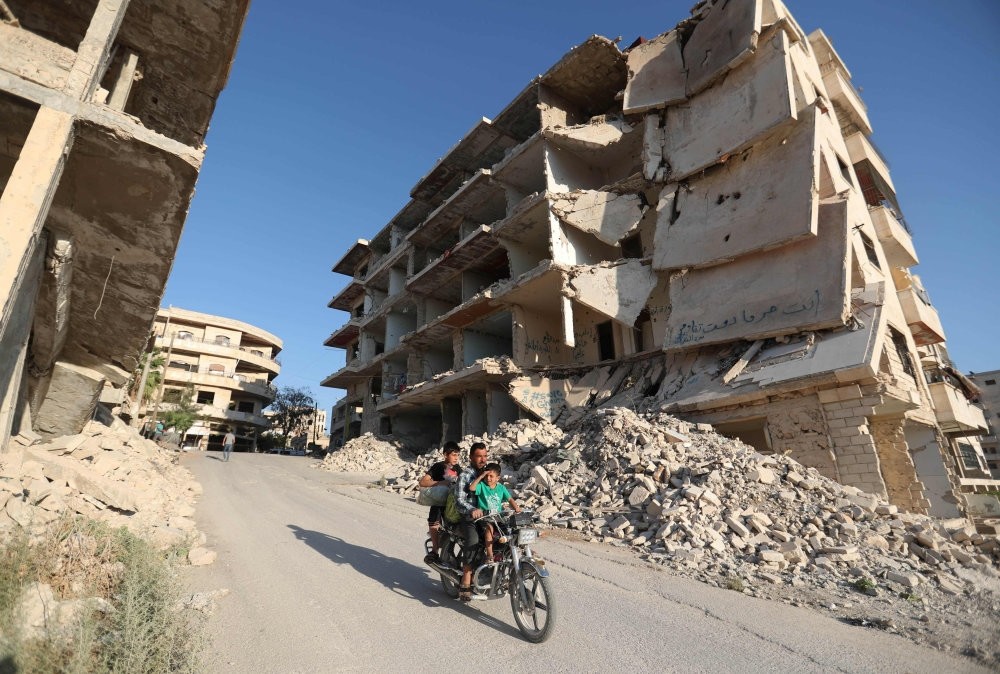 Syrian men ride a motorcycle past heavily damaged buildings in the opposition-held town of Maaret al-Numan in the north of Idlib province on Sept. 27.
by Daily Sabah Nov 13, 2018 12:00 am

Despite the Sochi deal cease-fire agreed on by Moscow and Ankara, the Assad regime continues to attack opposition-held areas in northwestern Idlib, resulting in civilian casualties

Despite the Sochi agreement reached by Turkey and Russia to preserve the cease-fire in Idlib, Syria's Bashar Assad regime forces have violated the deal by continuing assaults in southern parts of the province.

Late Sunday, the regime and its supporters opened artillery fire on civilian settlements in the villages of Tuh, Al Tamanah in southern Idlib and the Latamne district of Hama as well as Murak. The information about casualties following the assaults have not been shared yet.

The National Coalition for Syrian Revolutionary and Opposition Forces condemned on Sunday Assad regime forces' violations of the Sochi cease-fire deal. The coalition held its 42nd general assembly meeting in Istanbul on Nov. 10-11 where Assad's continuous violations of the Sochi deal were condemned in a statement. The statement also said the opposition group is negotiating to normalize conditions for civilians in areas under the control of opposition groups and cleared of radicals. It added that the international initiatives on releasing captives are being assessed, yet the related files are not yet actively being handled by the involved parties.

The Sochi agreement was reached on Sept. 17 by President Recep Tayyip Erdoğan and his Russian counterpart Vladimir Putin. According to the agreement the cease-fire in the Idlib region will be preserved, with the withdrawal of heavy arms and radicals from the region. Prior to the agreement, the Assad regime was signaling a grand operation toward Idlib, which is the last stronghold of the opposition, sparking deep fears in the international community of a new humanitarian crisis.

As Turkey and Russia stepped in and averted a possible disaster, the Sochi deal was internationally welcomed. In relation to the implementation of the agreement, Turkish and Russian officials have been taking positive stances, stressing that the process has been continuing in line with the deal.

Yet, the regime and its supporters have been attempting to violate the agreement. Since the Sochi agreement in September, more than two dozen civilians have lost their lives in attacks by the regime with many injured.

While the regime forces have been continuing their assaults, opposition forces withdrew their heavy arms by Oct. 10. As part of its effort to provide a resolution for the ongoing Syrian conflict, Turkey has been holding talks with various countries to take concrete steps. Previously, a quartet summit was held in Istanbul last month with the participation of Turkish, Russian, French and German leaders. In a joint statement, the four leaders expressed their determination to reject separatist agendas aiming to undermine the sovereignty and territorial integrity of Syria. It was underlined in the summit that it was crucial to reach a permanent cease-fire in the Idlib region as well. It was also emphasized in the summit that efforts will be accelerated for the political process, stressing that free and fair elections should be held for Syrian people to decide on their future.