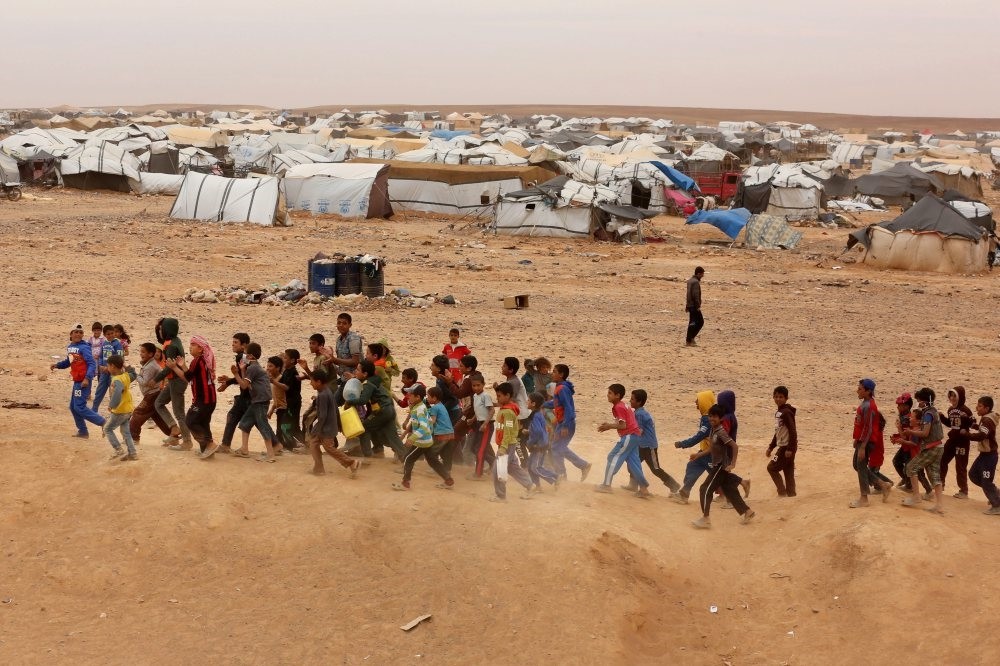 Syrian refugee boys await approval to enter Jordan at the Hadalat reception area on the Syrian-Jordanian border, about 320 kilometers (200 miles) northeast of the capital of Amman, May 4, 2016.
by Daily Sabah with Agencies Nov 14, 2018 12:00 am

Bashar Assad is desperately trying to ease international pressure regarding Law 10 by issuing minor amendments, but in reality nothing has changed. The Syrian regime is still looking to confiscate the properties of displaced Syrians throughout the country

The Bashar Assad regime continues its controversial policy of expropriating the properties of displaced Syrians while initiating minor changes in the policy for show. The new amendments, published by the regime's news agency SANA late Sunday, say residents now have a full year instead of one month to prove they own property in redevelopment zones in order to receive shares in the projects; otherwise, ownership will be transferred to local offices. The regime introduced the amendments to ease international pressure following the passing of the law in April.

The Syrian regime passed Law 10 in April to create "redevelopment zones" to rebuild property damaged over the seven years of civil war. According to the law, those who own property are supposed to deliver their deeds to authorities; otherwise, the regime will be able to confiscate the property and allocate it among its own people. Although the regime portrayed the law like an opportunity for civilians to protect their property, the main purpose was actually to expropriate the properties of people who had to leave their hometowns to escape the war.

Last month, U.N. humanitarian aid official Jan Egeland said Syria's government had withdrawn the law, saying he was told of the decision by Russia, a key ally of Assad that tipped the balance of power in his favor since joining the war three years ago.

Local authorities in Syria have yet to announce which areas they want to redevelop under Law 10, so the impact of the measure or how it may affect property owners have not yet been tested.

During Syria's seven years of armed conflict, half the prewar population of 22 million fled their homes, with about 5 million seeking refuge abroad. It is these displaced families who will be most at risk of losing property, rights groups have warned, as many do not have the right paperwork or legal and financial resources to make a claim.

In the chaos of the war, many government buildings were destroyed along with property records, while refugees and other displaced people have their lost identity cards or land deeds, meaning it could take a long time to prove property ownership.

For refugees abroad, getting power of attorney under Syrian law for a friend or relation back in Syria to apply on their behalf takes a minimum of three months, even if they both have all the right documents. It also requires a security clearance - potentially a problem for people who fled districts that were controlled by the opposition before being retaken by regime forces.

Countries hosting refugees voiced concern over Law 10, saying its effect might be to prevent refugees from returning if they were to lose their property in Syria.

A third of Syria's housing stock has been destroyed over the last seven years, according to Human Rights Watch. The World Bank says Syria has suffered close to $300 billion in material damages throughout its war.

Prior to the latest amendment, Human Rights Watch had said in May that the government passed laws to seize private property, displace residents and discourage refugees from returning.

Law 10 affects "property rights without due process or compensation, amounting to forced eviction and property seizure for owners whose property rights are not recognized," the rights group said.

"The apparent lack of access and capacity for refugees affiliated with anti-regime groups to lay their claims means that there is no opportunity for genuine consultation," it added.

As a result, Human Rights Watch said Law 10 is "a significant obstacle to returning" for refugees.