Erdoğan: Feb. 28 one of most shameful days in Turkey's history 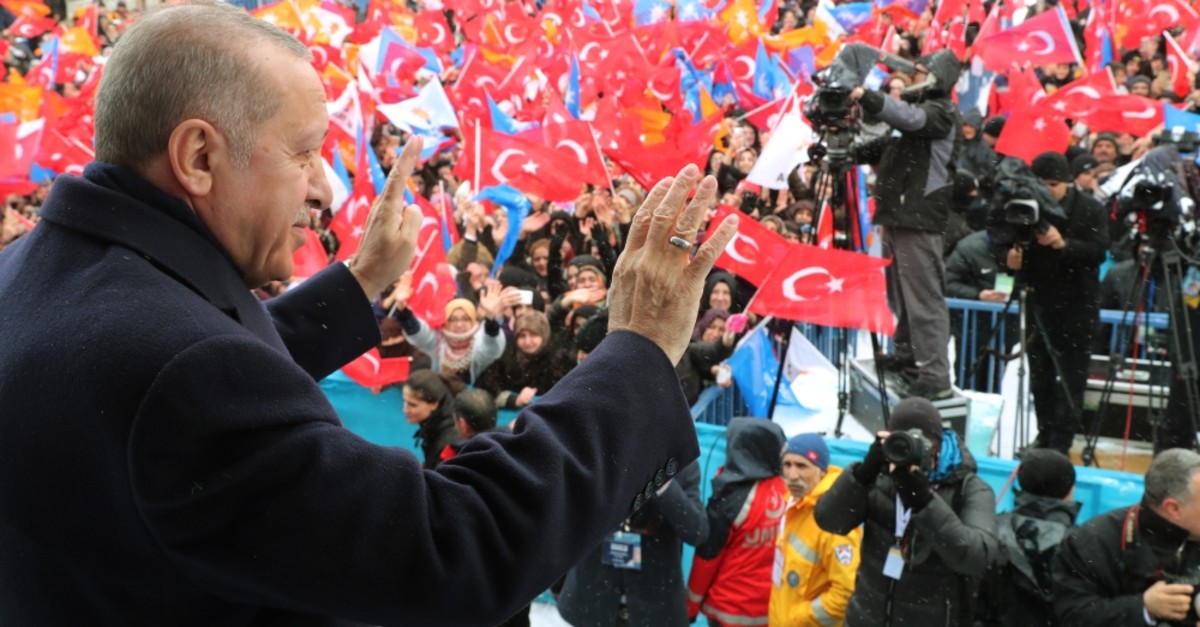 The president marked the 22th anniversary of the postmodern coup of Feb. 28, 1997, when the conservative segments of society were blacklisted simply for their adherence to the Islamic faith

Feb. 28, 1997, when the postmodern coup took place, is one of the most "shameful" incidents of the country's political history and was a result of the main opposition Republican People's Party's (CHP) mentality, President Recep Tayyip Erdoğan said yesterday on the 22nd anniversary of the incident. "That was the day when my girls who were wearing headscarves were not allowed in universities," Erdoğan recalled during his rally in eastern Anatolia's Erzurum province. "We've suffered all of this because of the CHP," he added.

The coup on Feb. 28, 1997 stands out among several other coups in the short history of the Turkish Republic in terms of how it unfolded. Nevertheless, it was as hurtful as the others for its impact on the public, especially the conservative segments of society. Unlike other coups, including the first one in 1960, so-called "postmodern" coup did not involve a violent takeover of power and on Feb. 28, 1997, tanks were not rolling out on the streets like previous coups. It was the day when a military junta issued an ultimatum to the country's coalition government, which collapsed a few months after the ultimatum.

Both before and after the coup, thousands of people were blacklisted, dismissed from their public duties and forced to drop out of schools simply for their adherence to the Islamic faith. Women who wore headscarves had to quit their public sector jobs while men, from military officers to academics, were targeted by the secular elite in a barrage of investigations and trials, which were part of a witch-hunt against the faithful or anyone viewed as faithful.

Erdoğan reiterated his criticism over the recent statements of pro-PKK Democratic People's Party (HDP) in which they refer to eastern Anatolia as "Kurdistan," saying that if they want to live in some place called "Kurdistan" so much, they can go and live in northern Iraq's Kurdistan region.

"There is no place called Kurdistan in my country," the president underlined, adding that the ones who want to divide the country are destines to fail.

On Monday, during a joint event organized for the CHP's mayoral candidate for Istanbul's Şişli district, Muammer Keskin, the HDP's Şişli district head, gave a speech in which he expressed his support for Keskin while referring to eastern Anatolia as "Kurdistan."

"In 'Kurdistan,' we will take back all the municipalities that have trustees. In the other part of Turkey, on the other hand, we will not let the AK Party-MHP coalition win," the HDP member said, mentioning the country as if it consists of two separate states.

Bashing main opposition CHP for its close relationship with HDP, Erdoğan warned that the ones who sides with them would eventually be similar to them.

"Man is known by the company he keeps," Erdoğan expressed, referring to a well-known Turkish proverb on the issue. "They [HDP and CHP] will eventually get similar to each other," he added.

Erdoğan also mentioned the direct sale points that were recently launched. Answering the claims which suggest that the lines at the points are the lines of "scarcity," Erdoğan said that the lines of scarcity were the outcome of CHP's policies in the past.

"[Today's] lines are the lines of "wealth"," he highlighted.

The sale points, launched to circumvent middlemen and profiteers, have seen widespread demand from citizens and are likely to spread across Turkey. With the start of vegetable sales at municipal direct sale points, prices in vegetable wholesale markets and supermarket chains have dropped by half.

When it comes to AK Party's investments to Erzurum, Erdoğan said that they have invested a total of 24 billion liras to the province.

"We have built 94 health facilities, 24 of which are hospitals," Erdoğan said, adding that six dams were also built while 11 others are also on the way.