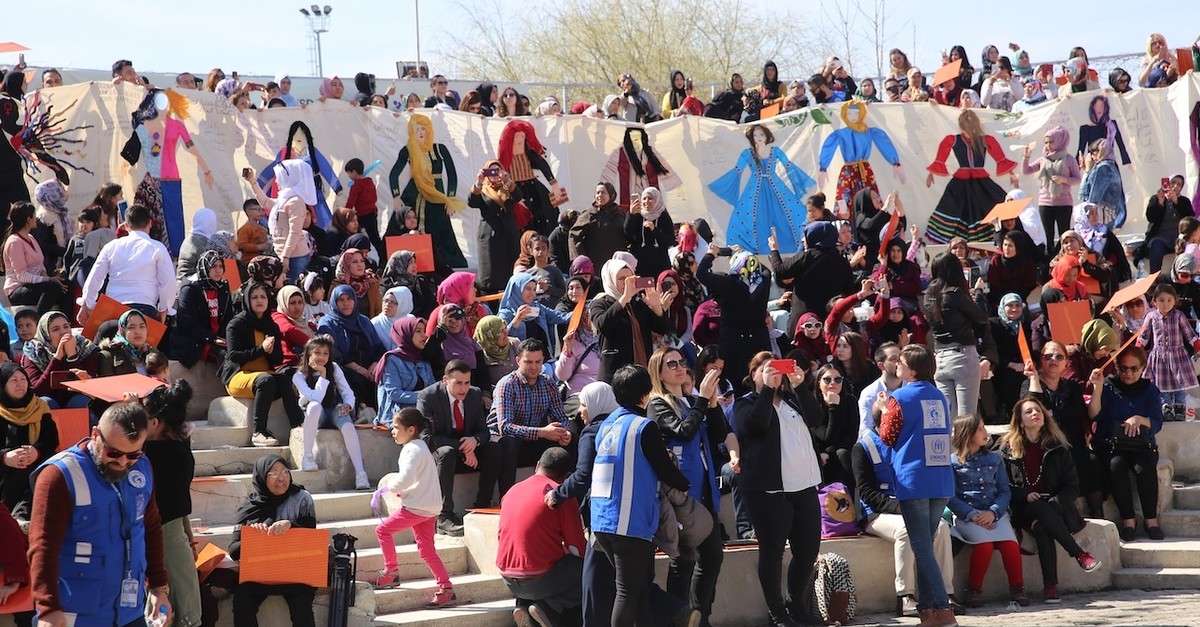 Syrian refugee women attending an event organized by the Association for Solidarity with Asylum Seekers and Migrants (ASAM) in Nevu015fehir, March 9, 2019.
by Özgenur Sevinç Mar 11, 2019 12:02 am

Despite the heavy burden of war and their memories of it, Syrian refugee women are rebuilding their lives in Turkey by taking small steps and looking foward to the future with hope

Syrian refugee women have been attempting to start a new chapter in their lives by means of education and employment, holding onto the opportunities provided in Turkey. The war in neighboring Syria has undeniably affected women and children the most. While the memory of war is already a heavy burden, the women whose lives were shaken by it are taking small steps in a country new to them, hoping for a better future. "When the war first erupted we thought that it would last for a few days and it would pass. But the war devastated the country, killing my husband and brothers," Iman al Qasim told Daily Sabah while she was visiting central Nevşehir province's touristic Cappadocia region as part of an event organized by the Association for Solidarity with Asylum Seekers and Migrants (ASAM).

The 33-year-old said that after the death of her husband she tried to continue her life in Syria for two years. "The missile attacks intensified; my children's school bombing was a breaking point for me. I could not stand it anymore and came to Turkey," she said recalling the time she took the decision to come to Turkey. Like Qasim, many mothers fearing for the lives of their children had to flee their homes and hope to return when the war ends and security is re-established. Turkey is home to more than 3.5 million Syrian refugees. Ten cities host some 2.8 million refugees, while others are scattered around the country.

Since 2011, Turkey has received a constant flow of displaced Syrians fleeing the conflict, and their numbers have increased from mere thousands to millions. So far, Turkey has spent more than $30.2 billion on their well-being.

"Arriving in Turkey, my children immediately started going to school, I also received my temporary identity. My children are happy here; they are all fluent in Turkish," Qasim said with the pride of a mother.

"I have a small shop in Gaziantep where I design clothes and embroider them and finally sell them. Now I am working with one person but I want to grow my business," said Qasim excitedly.

Even though the past few years had been tough, Qasim said that they carry on living and things seem fine currently. As her children are at school during the day, Qasim says she can find time to do her business and attend Turkish classes as well. 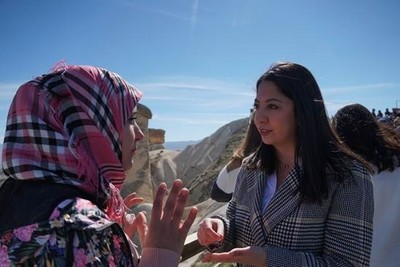 While Qasim is using her interest in fashion and colors in her job and dreaming of owning a bigger shop, Fadiya Shirani, a 23-year-old Syrian student believes that education is key for the future. Shirani who is a student at Erciyes University at the Department of Biomedical Engineering says that she has always been an dedicated student, yet her studies were disrupted with the war.

Remembering the times she, along with her family, moved from one place to another in Syria, Shirani said that she never gave up on her dreams of studying. "Wherever I go, I carried my books with me. For months I studied and read books in the light of a candle in a house with no electricity."

Amid escalating assaults, Shirani's home in Aleppo was bombed twice, prompting the family to leave the country in 2013.

"On the day of our arrival to Turkey, I learned that I lost a relative. The war teaches harsh lessons to a person, yet I can say that I was able to overcome it," she said with her eyes watering.

Shirani explains that after her arrival she finished her high school education. Following that she learned Turkish at TÖMER [Ankara University's foreign language education center] and prepared for the university entrance exam for foreign students in Turkey. Currently, Shirani is in her final year at her university in the central province of Kayseri.

Touching on her decision to study to become a biomedical engineer, Shirani said: "The reason that I am studying in this department is that I want to learn the necessary skills to help Syrians who have lost their organs because of the war."

Stressing that there is a huge need for hand prosthesis devices, Shirani added that her senior project will be about this issue.

While studying in Turkey, Shirani aims to set an example to young refugee children and give hope to them. As refugees from different countries Shirani and her friends have formed a volunteer group under ASAM and are organizing events particularly for young refugees.

"The aim is to give hope to young refugees; show them we have walked the same path and they can carry on with their lives as we did. My biggest success in Turkey would be in raising the hopes of young refugees and building bridges between people without making any racial distinction," she said.

In relation to Turkey's support for Syrian refugees, Shirani said that "no other country took steps like Turkey did. Turkey's help and support for the Syrian people is undeniable."

Following the civil war, many Syrians had to leave their country seeking shelter in various countries. While Turkey has been pursuing an open-door policy for Syrian refugees, many European countries have failed to shoulder their fair share of responsibility in managing the refugee crisis.

Another refugee woman living in Turkey, Duva Sıra, 27, has been attempting to use her skills in painting and drawing to have a fresh start in Turkey. Sıra who has a deep interest in painting and design said, "My dream is to open a workplace for design and drawing," and added that she tries to keep her dream alive. Sıra said that using her skill and turning it into an occupation is an exciting idea for her.

The young women stressed that she will continue to work to achieve her goals and provide a better future for her two children, showing the common trait of women of war who have not given up dreaming of a better future despite the heavy burden of past memories.