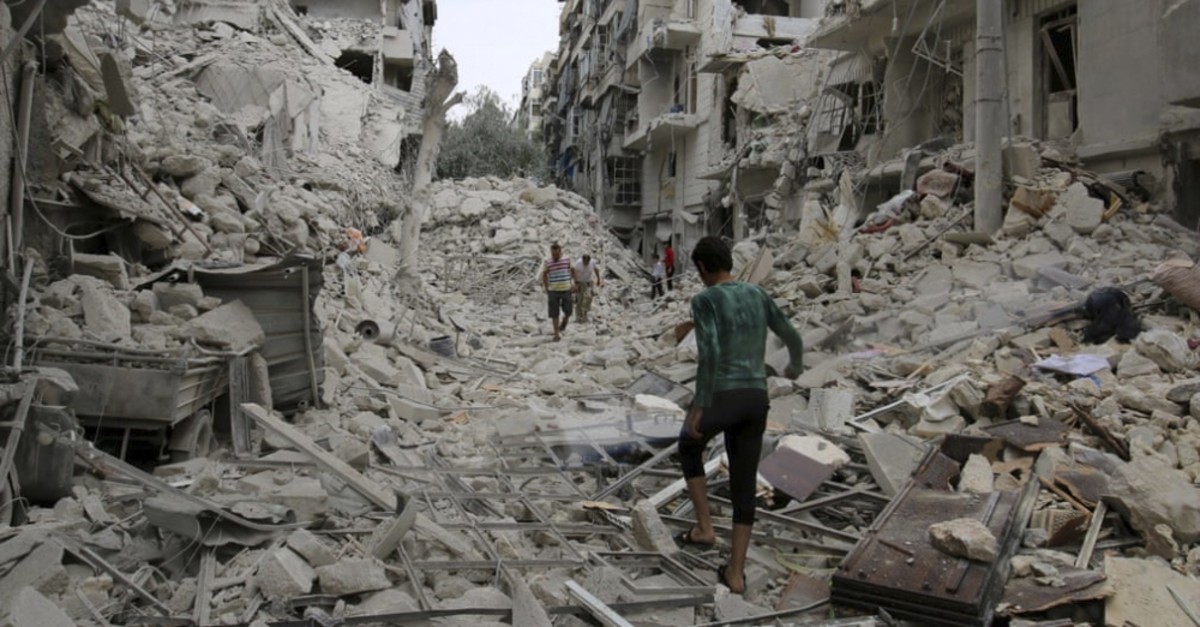 Today marks the ninth anniversary of the Syrian civil war, which has killed hundreds of thousands of people and seen the displacement of almost 6 million civilians

It was nine years ago when a group of young people organized peaceful protests against the Syrian regime in southwestern Daraa province only to be brutally oppressed by regime forces. When the incident first took place, it was regarded as yet another ordinary protest within the flow of the Arab Spring; no one could guess that it would be the spark of a bloody war that would last years. Yet, despite all these years of war, conflict and displacement, not much seems to have changed in the war-torn country; the regime still insists on its brutal actions while the opposition continues to resist as much as they can - in the end, it is the civilians who suffer the most.

However, displacing its citizens does not seem to be enough for the Syrian regime, as it has decided to undertake a policy confiscating properties, making sure civilians have no properties to claim if they return. Law 10, which was passed with the claim to create "redevelopment zones" in order to construct damaged properties, force people with properties to deliver their deeds to authorities, and if they don't, the regime has the right to confiscate those properties and allocate them among other people. Since displaced Syrian families do not have the right paperwork or legal and financial resources to make a claim, they are most at risk to lose their belongings to the regime.

Syrians have also had to face the torturous regime prisons. According to a recent report by the Syrian Network for Human Rights (SNHR), at least 127,916 civilians are being held in regime prisons while 13,983 people died as a result of torture by regime forces.

A Syrian woman, Rana, who was imprisoned in Syria in 2015, told Anadolu Agency (AA) last month that she "was beaten because I refused to confess to supporting the Syrian [anti-regime] opposition." She added that both her husband and son died in prison.

The torture by regime forces, however, has not been restricted to only prisoners, as civilians have also been targeted, in fact, they were targeted 216 times with chemical weapons.

German news magazine Der Spiegel released a report last month, saying that in the last nine years, chemical weapons have been used in the Syrian civil war far more frequently than previously thought, adding that in 98 percent of cases, the Bashar Assad regime is said to have been responsible for the attacks.

The SNHR further states that regime forces have followed a policy of besieging opposition-held areas, preventing access to food and medicine, resulting in the death of 921 civilians, including 187 women and 398 children, since March 2011.

Despite all these brutalities, regime forces, thanks to the support of Russia and Iran, have managed to take control over 60 percent of the country's territories.

Other causes of sufferings in Syria: YPG, DaeshRegime forces are not the only ones behind the suffering of civilians in the war-torn country. There are numerous terrorist organizations that are responsible for the miseries that civilians suffer. The PKK's Syrian affiliate, the People's Protection Units (YPG), is among the terrorist organizations that add to it as they are stopping people from freely moving in areas under their control.

The YPG is organically linked to the PKK, which is listed as a terrorist group by the U.S., EU and Turkey. Yet, under the pretext of fighting Daesh, the group has received huge military support from Washington and has acted as a U.S. proxy in the region.

The terrorist organization is known for its brutal policies against civilians under its rule. Previously, several human rights organizations documented human rights violations that the YPG was responsible for, from torture to recruiting children. Just like the Syrian regime, the YPG also has been confiscating the properties of local people while destroying their homes and forcibly displacing them. The U.N. Office for the Coordination of Humanitarian Affairs (OCHO) also reported an increase in deliberate disruptions of education and health services in northern Syria's Raqqa and Hasakah provinces, which are under YPG control. The terrorist organization also previously limited movements into and out of Manbij and threatened people to take up arms against Turkey by recruiting at least one young man from every household.

Currently, the YPG holds 28 percent of Syria's territories under its control while Daesh's territories have diminished to 2 percent. The opposition groups, on the other hand, have control of only 10 percent of the country.

Turkey has always been there for SyriansWhile all these terrorist organizations and regime forces have been busy destroying the country and harming civilians, Turkey has always been there with its humanitarian approach toward Syria. Since 2011, Turkey has received a constant flow of displaced Syrians fleeing the conflict, and their numbers have expanded from thousands to millions. Currently, the country is home to more than 3.5 million Syrian refugees. So far, Turkey has spent more than $30.2 billion on their well-being.

In order to prevent the formation of a terror corridor along its borders and clean the region from terrorist organizations, Turkey has launched two military operations against the YPG and Daesh in northern Syria. In August 2016 the Turkish military and Free Syrian Army (FSA) launched Operation Euphrates Shield and captured bordering Jarablus, al-Rai and al-Bab districts from Daesh. On Jan. 20, 2018, Turkey launched Operation Olive Branch to push the YPG and Daesh terrorists away from northwestern Syria's Afrin, liberating the region on March 18.

Following these operations, Turkey has also been involved in rebuilding infrastructure and health and educational institutions in towns. Schools are being renovated and a hospital is being built. Turkey has also helped local people build olive oil facilities in the town where agriculture is the main source of income for residents. Thanks to the success of both operations and post-operation developments in the liberated areas, the number of refugees returning to their hometowns has steadily increased in recent months.

Turkey has also been active in the diplomatic arena to come up with a political solution to the Syrian crisis. The Astana process, which has been a front-runner in a peace settlement in Syria, was founded between Turkey, Russia and Iran on January 2017. The Astana process resulted in establishing the de-escalation zones in the provinces of Idlib and parts of neighboring Latakia, Hama and Aleppo. To prevent a humanitarian disaster, Turkey and Russia stepped in and reached the Sochi agreement on Sept. 17, 2018, that envisaged a demilitarized zone of 15-20 kilometers between the warring parties and the evacuation of heavy weapons and radical groups from the region.