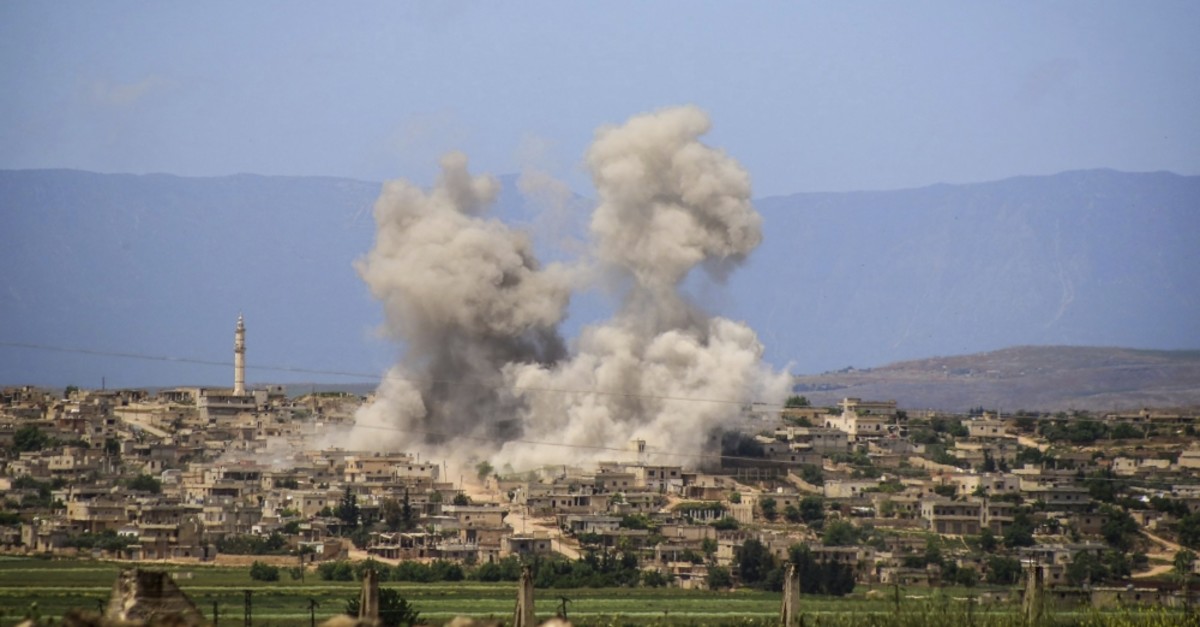 The Syrian regime is conducting a new version of its tried-and-true method of targeting civilians and residential areas in order to recapture Idlib, the last stronghold of the opposition

It has been seven weeks since Bashar Assad regime forces intensified their indiscriminate attacks on northern Syria's Idlib region. The action is turning into a familiar tactic of relentlessly and systematically striking residential places, health facilities, schools, markets and infrastructure to break the will of the population and pressure people to flee, according to international observers, rights groups and local residents.

Abdurrahim, a local resident who had to flee his hometown with his family to a nearby village, said that every time a warplane flew over their home, his 18-month-old daughter ran to him to hide in panic.

Speaking to The Associated Press (AP), Abdurrahim, who asked that his last name not be published for security reasons, said he refused to flee his hometown for years; however, the intensified regime offense launched in April targeting Idlib province forced him to think about his family's safety.

"That look on my daughter's face... is really what is going to kill me," said 25-year-old Abdurrahim, referring to his first and only child, Ruwaida.

The breaking point that collapsed Abdurrahim's determination to stay in his hometown came when an airstrike on May 30 pulverized the house next door, crushing three children to death, one of them a girl Ruwaida's age. Then, he and his family had to flee to survive.

What has been happening in Idlib is a new version of the tried-and-true method that worked for the Russia-backed Syrian regime forces in their previous, destructive campaigns that retook the city of Aleppo in 2016 and other strategic territories.

International observers and monitoring agencies state that the regime intentionally targets civilians, residential areas and infrastructure, as the international community keeps their silence over the ongoing humanitarian catastrophe.

"Even wars have rules," said Misty Buswell, the Middle East advocacy director for the International Rescue Committee, adding that the two hospitals it supports were hit by airstrikes. In this war, she said, attacks on civilians "have happened with absolute impunity."

The Sochi agreement was reached on Sept. 17 by President Recep Tayyip Erdoğan and his Russian counterpart Vladimir Putin. According to the agreement, the cease-fire in the Idlib region will be preserved, with the withdrawal of heavy arms and radicals from the region. Prior to the agreement, the Assad regime was signaling a grand operation on Idlib, which is the last stronghold of the opposition, sparking deep fears in the international community of a new humanitarian crisis.

Following eight months of calm provided by the Sochi deal, the regime has intensified its attacks since April 26 under the pretext of fighting Hayat Tahrir al-Sham (HTS) militants holed up in Idlib. The intermittent attacks and bombardments have killed, wounded and displaced thousands. Residential areas have been destroyed by indiscriminate attacks, while numerous educational facilities, health facilities and residential areas collapsed or have become unusable after being targeted by bombs.

The bombing "targets everything... bakeries, hospitals, markets. The aim is to stop all services to civilians. Everything," said Wasel Aljirk, a surgeon whose hospital was blasted by strikes.

At least 32 hospitals and health facilities around the enclave have been put out of service, either because they were struck or suspended their operations for fear of being hit, Mustafa al-Eido from the Idlib health authority said Thursday.

Also, there have been at least six attacks on civil defense centers, 29 attacks on schools and much more on other civilian infrastructure in the past month, where the number of fatalities has exceeded 300 during the regime's indiscriminate attacks targeting civilians and residential areas. At least 61 children are among those killed since April, according to Save the Children, although the Idlib health authorities put the figure at 75 children killed in May alone.

As a result, more than 300,000 people have been displaced in the past two months with the majority in the past four weeks, and over 200,000 of them are living in the open with no shelter, as internally displaced sites close to the Turkish border are extremely overcrowded and already running at double capacity. Aid groups fear that figure could spiral to 700,000 displaced.

Since Turkey is already hosting almost 4 million Syrian refugees, it would be impossible for the country to handle a new refugee flow on such a large scale. This is not only a concern for Turkey but would also have implications for Europe. It has been estimated that around a half million people may flee to Turkey, from where they might attempt to cross into Europe.