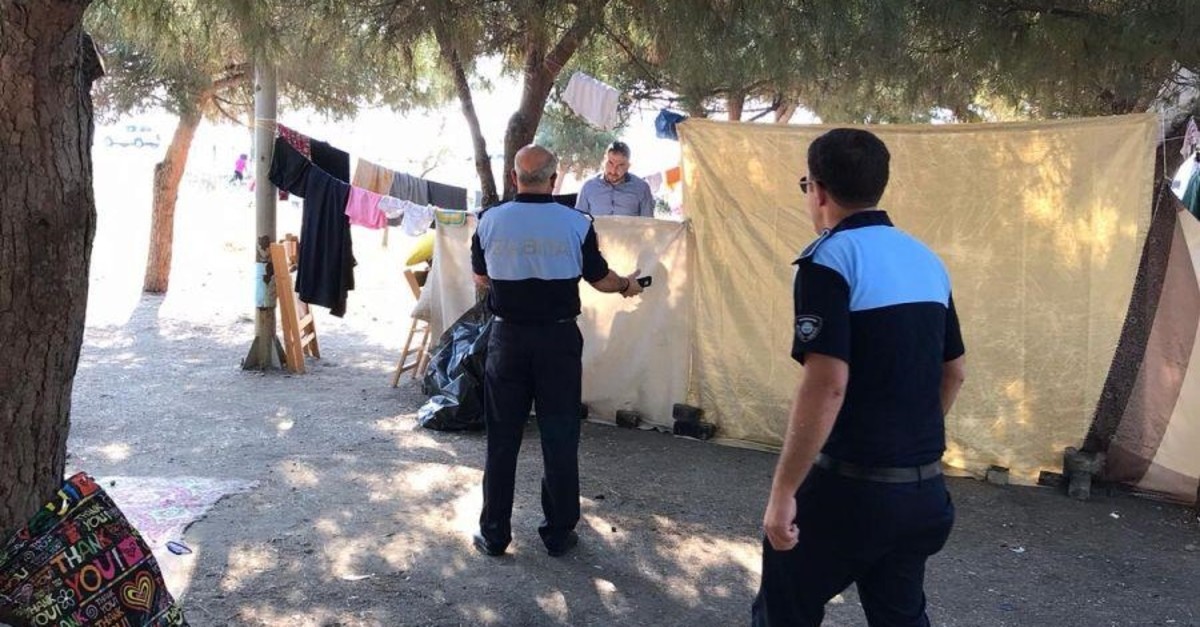 A Republican People's Party (CHP) mayor's reasoning for clearing makeshift tents set up by Syrian refugees on the coastline drew criticism as the latest example of the party's anti-migrant practices.

Hayri Türkyılmaz, the CHP's mayor in northwestern Bursa's coastline district Mudanya, instructed municipal police to clear the tents set up by Syrians, along with animals left grazing in the area including camels and horses, which were also brought into the sea to cool off and to be washed.

Local media outlets reported that residents were long complaining that the coastline was illegally occupied by Syrians as well as Turkish nationals, who went swimming in their underwear, littered the area and prevented others from using the public beach. Their complaints increased during the nine-day holiday for Ramadan Bayram, also known as the Eid al-Fitr, when millions of people left large cities for their hometowns or holiday resorts.

A similar move to clear makeshift tents from coastal Gemlik district's Kumla beach was also carried out by the municipal police units of the CHP-led district municipality and the Bursa Metropolitan Municipality run by the Justice and Development Party (AK Party). Both Mudanya and Gemlik are the closest resort towns to Bursa, which is the country's fourth largest city with a population of over 3 million.

However, Türkyılmaz drew backlash over his anti-refugee remarks for justifying the clear-up. "They (Syrians) will obey our rules or will return to their countries. While our children are martyred, our economy is deteriorated, they have no right to live in self-indulgence," he told the media, starting a controversy with numerous media outlets reporting that Syrians were banned from entering the coastline.

The mayor added that the municipal police intervened in the coastline, normally under the jurisdiction of the metropolitan municipality, due to mounting complaints and called on related authorities to intervene.

Türkyılmaz has not been the first to take such a stance against Syrian refugees. Tanju Özcan, the new CHP mayor in western Bolu province, instructed municipality departments to stop relief for foreigners since they were already receiving aid from the central government, saying that Syrian refugees should return home as soon as possible. Despite receiving stern criticism, he later continued to support his anti-refugee plan, saying that Iraqi, Syrian and Afghan refugees are living in the "highest standards" in Bolu.

CHP Mayor Rıdvan Karakayalı of the Kemalpaşa district of western Izmir province is also another example of the CHP's increasing anti-refugee rhetoric, as he has promised to expel Syrian refugees in April.

"We will get rid of Syrians. There is peace in Syria, so what they are doing here?" Karakayalı said on a TV program, answering a question regarding the situation of refugees in the district.

The recent anti-refugee practices of the CHP have drawn reactions from the public. The International Refugee Rights Association filed a criminal complaint against the Bolu mayor. Speaking for the International Refugee Rights Association, lawyer Uğur Yıldırım said Özcan's decision has caused public resentment, and he did not heed the calls of civil society organizations and lawyers, continuing his discriminatory policies against Syrian refugees. Yıldırım added that Özcan violated the Human Rights Declaration's 14th article of the right of sanctuary and asylum and also acted against equality and equal access to municipality services listed in the Constitution.

During the campaign period of the June 2018 parliamentary and presidential elections, CHP Chairman Kemal Kılıçdaroğlu adopted a similar populist and exclusionary interpretation of nationalism in a bid to garner votes. In a speech at a rally in northern Giresun in 2017, Kılıçdaroğlu said: "There's no money for farmers, but do you know how much has been spent on the Syrians? $30 billion. They've become first-class citizens. The price of hazelnuts has made people in the Black Sea Region second-class citizens. You will ask for an account of this."