Turkey to follow up on probe into Morsi's death in international scene, Erdoğan says 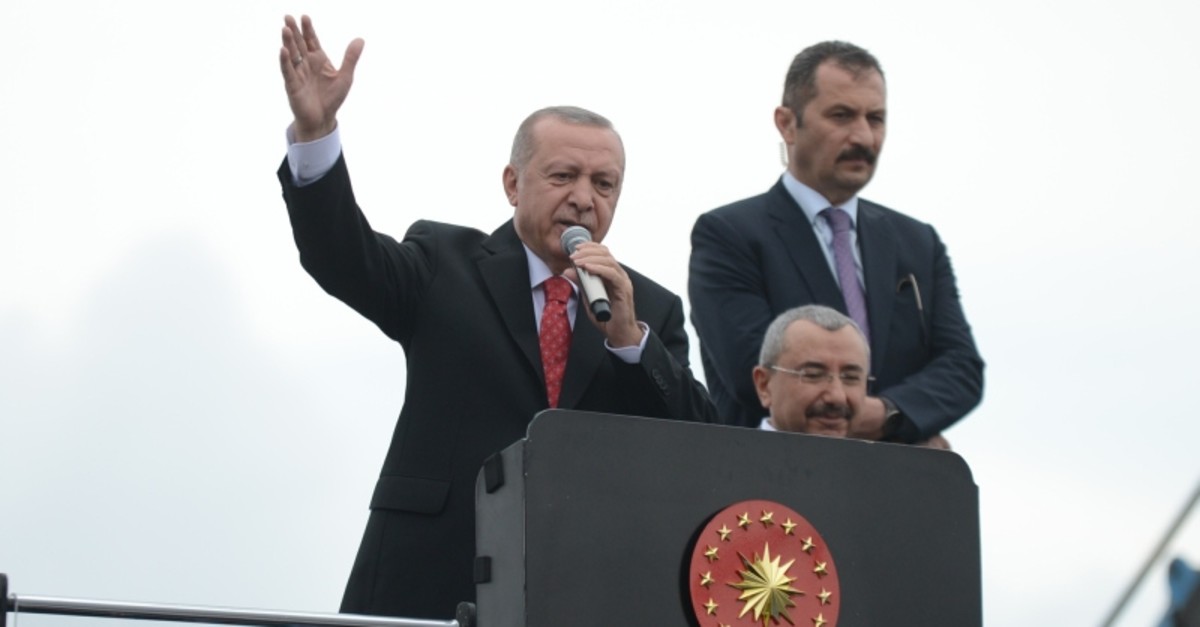 President Recep Tayyip Erdoğan said Wednesday that Turkey will follow up on the case of Mohammed Morsi, Egypt's first president elected through a popular vote, after he died Monday during a trial in a courtroom, in the international scene.

"Mohammed Morsi unfortunately struggled on the floor in the courtroom for 20 minutes, but authorities did not intervene. That's why I'm saying Morsi did not die of natural causes, but was killed," Erdoğan told the crowd during an inauguration ceremony in Istanbul's Sancaktepe district.

"We are urging the Organization of Islamic Cooperation (OIC) to act, and do what's necessary," Erdoğan said, adding that he will bring up the issue at the G20 summit in Japan scheduled for June 28 and 29.

"We'll follow up on the process and do whatever is necessary to make sure Egypt is tried in international courts," he added.

Morsi was elected president in 2012 but was ousted in a military coup a year later. The military, then led by incumbent President Abdel Fattah el-Sissi, crushed the Muslim Brotherhood movement in a major crackdown, arresting Morsi and many others of the group's leaders, who have been in prison undergoing multiple trials ever since the coup.

Morsi reportedly died from a heart attack Monday during a court session. The country's state television reported early Tuesday that Morsi was "suffering from a benign tumor, had continuous medical attention and his death was caused by a heart attack." He was buried in Nasr City, east of Cairo, early Tuesday morning.

The silence of Western countries, including France and the European Union, on the death of Morsi is a clear indicator of a double standard, said French lawyer Gilles Devers.

Gilles Devers, a French lawyer and academic who has represented the Palestinian Authority before the International Court of Justice, said that they applied to the United Nations and the International Criminal Court (ICC) to launch an investigation about the death of Egypt's first democratically elected president, Mohammed Morsi.

He added that he, as a French citizen, is disturbed by double standards in French media. Devers said that they had applied to the U.N. and ICC for an investigation into Morsi's suspicious death, with the support of nine international organizations. They also demanded experts to conduct medical examinations in Egypt.

Saying that Morsi did not get necessary medical treatment in prison for six years, Devers added: "Morsi's death is not a normal one. No one can claim the opposite."

"Health problems that could cause Morsi's death did not occur suddenly," said Devers adding Egypt must give information about Morsi's health condition records.

"I believe that Morsi lost his life due to bad treatment in prison," he added, stating that an official investigation into the causes of Morsi's death is necessary.

Meanwhile, the EU offered condolences in a message to Morsi family, according to information received by the Delegation of the European Union to Turkey.

Bakir Izetbegovic, the Bosniak member of the tripartite Presidency of Bosnia-Herzegovina, was another politician who released a condolence message in the wake of Morsi's sudden death. "I offer my condolences to the people of Egypt and Morsi's family. Morsi first lost his freedom. Now, he lost his life during his struggle for the freedom of the people of Egypt," he stated.