Erdoğan: A period of improved services around the corner 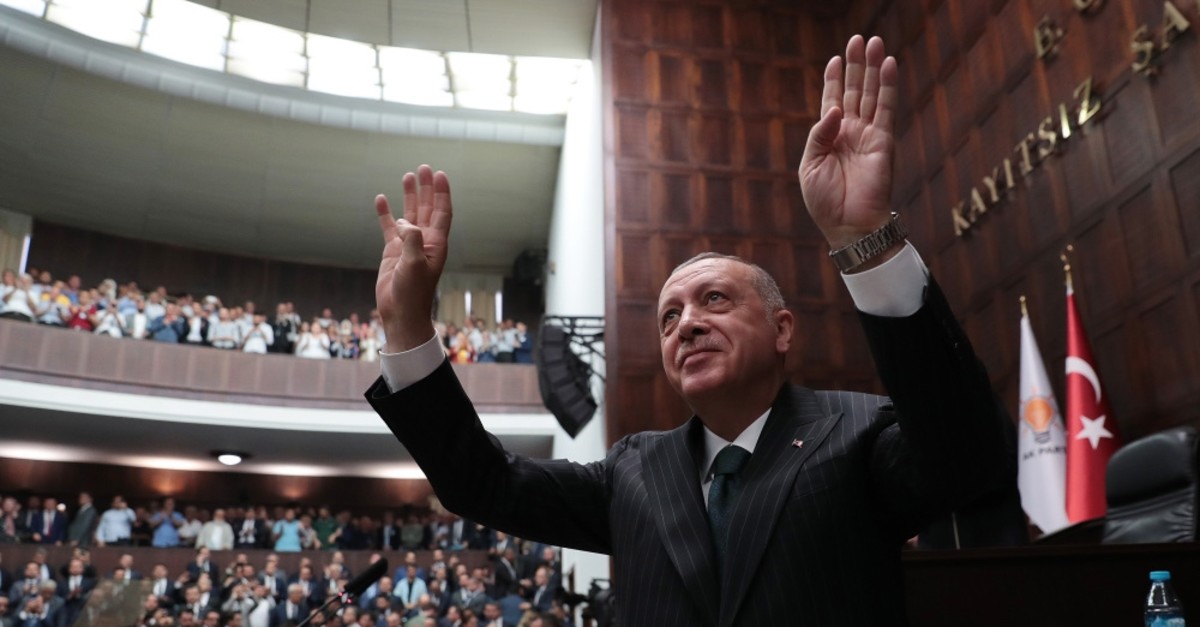 During his first major speech following Sunday's polls, President Recep Tayyip Erdoğan expressed the importance of the people's will, underlining that the AK Party will continue providing services as it always has

Turkey will enter into a period of improved services now that elections have been left behind, President Recep Tayyip Erdoğan said yesterday. Erdoğan made his first evaluation of the recent developments yesterday during his party meeting in Ankara and spoke on various subjects from local polls to Syria. "In the upcoming period, the presidency and national assembly will be occupied with services for four years while municipalities will put their efforts into public works for five years," the president said, marking the end of the elections. Regarding the June 23 Istanbul mayoral elections, Erdoğan started his speech by congratulating Nation Alliance candidate Ekrem İmamoğlu on his victory.

"The decision by Istanbul's residents is more than welcome for us," the president underlined, adding that they would have of course preferred for People's Alliance candidate Binali Yıldırım to win. "Still, I thank him [Yıldırım] for his efforts and struggle [during the campaigning period]," Erdoğan expressed. In Sunday's elections, İmamoğlu received 54.21 percent of the total votes, while Yıldırım received 44.99 percent. Erdoğan added: "With its will on March 31 and June 23, the nation said, 'No stopping, let's move on down the road.'" Expressing that the whole process since March 31 to June 23 was a judicial period, Erdoğan mentioned that the March 31 polls in Istanbul were annulled in the first place due to irregularities determined in voting records and polling clerks. Following March 31, Erdoğan initially announced that no elections were planned until 2023, as there have been frequent elections in recent years.

However, the March 31 polls did not turn out as eventless as everyone hoped as suspicions over irregularities started to emerge regarding the municipal polls, the ruling Justice and Development Party (AK Party) demanded a recount of the votes, which was rejected by the main opposition Republican People's Party (CHP).

After the CHP rejected the suggestion to clear suspicions, the Supreme Election Council (YSK) decided to annul the elections and redo the polls on June 23. Hence, the June 23 elections were a rerun of the March 31 polls, however, it was a version free of suspicions as democracy necessitates. As a result of the June 23 polls, residents in Istanbul were able to choose whoever they wanted freely and felt relieved that no doubt remained in their minds about the election.

Erdoğan also said that where the overall results is concerned, the winner of the March 31 polls was "without a doubt" the People's Alliance that was formed between the ruling AK Party and Nationalist Movement Party (MHP). He said that in the overall country, 52 percent of the mayor positions belong to the People's Alliance as a result of the March 31 polls while 60 percent of municipal council members are also from the AK Party. A similar situation is also visible in Istanbul since, although the metropolitan mayor is from the Nation Alliance, 25 out of 39 district mayors belong to the People's Alliance.

People's message to AK Party not to be overlooked

"We don't have the luxury to ignore our people's messages to us," the president further emphasized, expressing that in his understanding of politics, there is no such a thing as resenting the people. On the contrary, the president underlined that they will continue to serve the people as they have before, no matter what. He also added that they'll question themselves on why they have not been able to explain themselves to the people.

"We will determine what was missing in every area and try to find ways to overcome them. In accordance with these evaluations, we will take the step that we need to take with determination. However, [these steps will not be taken] in accordance with others' definitions since we have the ability to come up with our own definitions [for our own problems]," Erdoğan added.

"In order to be worthy of our people's love, we will continue to work until the death," he said.

"From now on, we will focus our attention and power into the upcoming agenda and continue our work in that way," the president underscored, hinting what the future holds for Turkey.

"We will unite all of our opportunities to enable the people of this country, with its women, men, youth and elderly, to reach their dreams and have a better life," he said.

"Tomorrow, there is the G20 summit in Japan. We will also go to China," Erdoğan said. "We will have several meetings regarding Turkey's economic and security interests. We will have numerous bilateral meetings," he added.

The president has a busy agenda due to diplomatic meetings on the economy and Turkey's purchase of the Russian-made S-400 surface-to-air missile system in the aftermath of the Istanbul mayoral elections. The president will attend the G20 Leaders' Summit on June 28-29 in Osaka, Japan, where he will meet U.S. President Donald Trump to discuss the S-400 missile system and bilateral investment opportunities.

Following the G20 Summit, Erdoğan will pay an official visit to China on July 2 to meet Chinese President Xi Jinping. The main focus of the meetings in China will be commercial relations. Turkey aims to have more balanced trade ties with China given the $20 billion trade deficit with the Asian country. After the Japan and China visits, the president is expected to visit India to meet Indian President Ram Nath Kovind and Prime Minister Narendra Modi.

Terror corridor in Syria to turn into security corridor

"We've eliminated all the attacks of the terrorist organization in Syria," Erdoğan said, in regards to Turkey's counter-terrorism operations in Syria against the PKK's Syrian affiliate, the People's Protection Units (YPG).

A 20-mile-deep safe zone between the northern Syrian towns of Jarablus and al-Rai has been mentioned several times since 2012 by Erdoğan, who has maintained that the terror-free safe zone to be established in Syria's north must be based on the country's territorial integrity. However, the plan did not come to fruition at the time. The details of the safe zone need to be ironed out, yet, one thing is clear: Turkey is firmly against the presence of the YPG in the region.

"We've removed the terrorist corridor through our interventions. We want this terrorist corridor to turn into a security corridor," he said, adding that Turkey wants to have a settlement area in the region there for Syrian refugees. Stating that he has previously called on world leaders, from German Chancellor Angela Merkel to U.S. President Donald Trump, to assist Turkey on this matter, Erdoğan said that despite welcoming the idea, they did not take any further action to make the project a reality.

Regarding the liberated areas in northwestern Syria, the president said that 330,000 refugees have already returned to their hometowns and resettled in there.

"If we deal with the problems in the eastern Euphrates area, I believe that soon the number will reach into the millions," he further said.

The return of Syrian refugees has been made possible recently thanks to Turkey's two operations: Operation Euphrates Shield and Operation Olive Branch. Turkey launched Operation Euphrates Shield in 2016 to clear provinces west of the Euphrates, such as al-Bab and Jarablus, from Daesh and the YPG. Operation Olive Branch was launched in 2018 in northwestern Afrin province, again to clear the region of terrorist elements. Both these operations proved successful and achieved their goals of bringing peace to the region.

Erdoğan also touched upon the recent statements of PKK head Abdullah Öcalan, saying that it shows that there are disagreements within the terrorist organization.

Öcalan, previously called on the pro-PKK Peoples' Democratic Party (HDP) not to side with any other party in the Istanbul mayoral election rerun on Sunday. Although the HDP co-leaders said in a written statement that Öcalan's statement was in line with the HDP's strategy until now, which is to support İmamoğlu in the polls, the move is seen by many as a major division within the bloc.

When it comes to the AK Party's relations with the Kurds and criticism regarding the issue, Erdoğan said that the ones who claim there were not enough investments made for Kurdish citizens should go and see the eastern and southeastern provinces where the population is mostly Kurdish. "If we were to ignore our Kurdish brothers, we would not have invested in the southeastern, eastern regions. What have we not done for the Kurdish people? Words don't mean anything, the thing that matters is what work you do," he underlined; emphasizing that there is no discrimination against anyone or any group in Turkey.