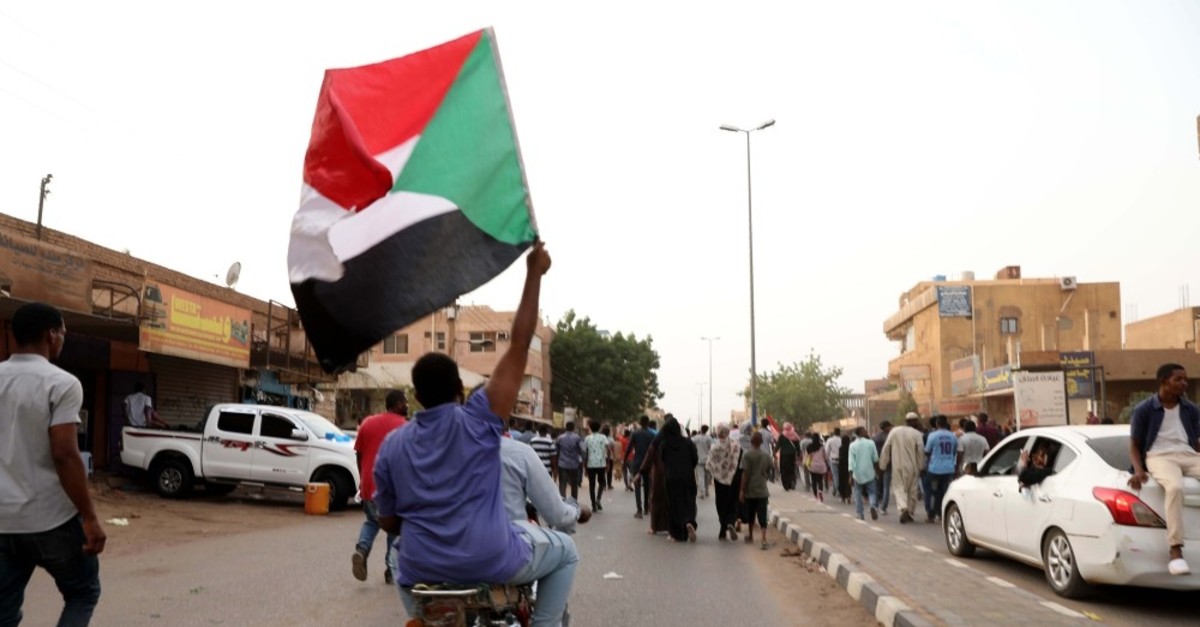 Sudanese protesters shout slogans during a protest against the ruling military council in Khartoum, June 30, 2019.
by Şeyma Nazlı Gürbüz Jul 03, 2019 12:15 am

Ties between Turkey and Sudan, a country that is going through political instability and intervention by regional actors, has a 500-year history and is likely to gain even more momentum in the upcoming period

It is not news anymore that Sudan is struggling to rise from its ashes by leaving the chaotic political atmosphere behind since the overthrow of a decades-long ruler back in April. However, despite all the instability and ambiguity that is going on in the country as well as the disapproval of several regional actors, Sudan still looks to Turkey, a long-lasting partner that has never let down the Sudanese people, in order to improve ties even further. In order to get a glimpse of the current situation in the northeastern African state and its perspective on Turkey, we, as Daily Sabah, interviewed İdris Suleiman, the political secretary of the Popular Congress Party of Sudan, a party founded in 1999 by Hassan al-Turabi after a division of interest with the head of the National Congress Party Omar al-Bashir, who was also the country's leader at that time.

"I believe that the already well-established relations [between Turkey and Sudan] will flourish even more in the upcoming period and be beneficial for both sides," said Suleiman, referring at the long history of bilateral ties which have been ongoing for 500-years without any interruption. As a matter of fact, Turkey was among the first countries to open an embassy in Sudan after its independence in 1956. Still, there is no doubt that ties gained new momentum in recent years with diplomatic visits, before the overthrowing of al-Bashir. President Recep Tayyip Erdoğan paid an official visit to Sudan in 2017 where the president and his delegation were given a very warm welcome. Yet, when al-Bashir, who was ruling the country since 1989, was dethroned in April, there were many speculations regarding Turkey and Sudan's relationship.

According to Suleiman, who was also Sudan's envoy to Ankara between 1997-2001, this is not the right perspective in reading the two countries' ties."The relations between Sudan and Turkey are not limited to personal ties between the countries' leaders. It is much deeper than that," he underlined and recalled the agreements that the countries made during Erdoğan's visit.

The Suakin Island deal was one of the most significant ones signed during Erdoğan's 2017 visit. After he visited the island in northeastern Sudan with al-Bashir, Erdoğan expressed his sadness over much of the historical island lying in ruins. Cooperation and an investment agreement between Turkey and Sudan were signed following the visit. "Suakin is a very small island. There are 340 houses there of Ottoman heritage. Turkey only re-inherits those," said Suleiman, adding that this way, Turkey actually assists the tourism sector of Sudan. The speculation over the island reached a point that it was hinted by some that the deal between Turkey and Sudan over the island was off.

Reports alleging that the deal between Turkey and Sudan for the reconstruction and restoration of the historic island on the Red Sea coast could be canceled do not reflect the truth, Turkish Foreign Ministry spokesperson Hami Aksoy said last month. Aksoy's comments came after Gen. Abdel-Fattah Burhan, the head of the military council tweeted that Suakin is an "inseparable part of Sudan."

The general's tweet came after a series of articles by Arabic news outlets and pundits claimed that the new administration in Sudan, believed by many to be backed by Saudi Arabia, Egypt and the United Arab Emirates (UAE), is scrapping the deal with Turkey and was getting prepared to set May as the deadline for Turkish presence on the island.

In 2017, when the deal was first signed, it caused concern in the international arena, particularly in Saudi Arabia, Egypt and the UAE, over allegations that Turkey was seeking to expand its military foothold in Africa, the Gulf and the Red Sea.

"It's only a tourism Project," Suleiman indicated, pointing at the fact that some countries are not happy with this cooperation between the two, giving the example of Egypt. "It [Egypt] very well knows that this is only a tourism project. However, it does not want any competition in the tourism sector," he said.

"If there are five pyramids in Egypt, there are 299 in Sudan. Besides, Sudan has the most beautiful coast in the world," he underlined, highlighting the best tourism attractions in Sudan.

Sudanese no longer give credence to colonial mentalities

According to Osman Nuri Önügören, a Turkish businessman whose family was one of the first Turkish investors in Sudan, Sudanese people no longer give credence to countries and investors who still harbor colonial mentalities.

"They want more participative investors and states in their country," he said, underlining that is why they are very welcoming of Turkey.

Expressing that he was also alongside Erdoğan during his 2017 visit, Önügören said the atmosphere at the time was "quite warm and friendly, from both the Sudanese state and people."

"However, this situation, of course, disturbed some neighboring countries," he added. Yet, still, in Önügören's opinion, a new democratically elected government would probably side with Turkey, regardless of political affiliations, since the people of Sudan have very strong feelings for the country.

When it comes to other regional and international actors that have tried to intervene in the country's relations with Turkey as well in domestic affairs, Suleiman said that when there is no unity within a country, an opportunity rises for international powers to intervene.

"However," he emphasized, "all these countries need Sudan more than Sudan needs them." "Thus, they should not have the upper hand. Instead, we should be equals," he added, saying that there is no place for these countries to intervene in Sudan's domestic affairs.

When asked about whom he refers to when saying international actors, he mentioned Saudi Arabia and underlined once again that the kingdom needs Sudan more than Sudan needs it and thus should know its place when trying to intervene in the country's businesses.

"What is the most important thing for a country? It is security," he said and expressed that Sudan assists Saudi Arabia in providing its security.

"We send soldiers to Yemen who fight for Saudi Arabia. We are shedding our blood for them and in return they give us money. Which one is more important? Of course the bloodshed," he emphasized.

Sudan is part of the UAE and Saudi-led military coalition fighting Iran-backed Houthi rebels in Yemen. That marked a dramatic shift by Khartoum, which aligned itself with the Gulf Arab monarchies at the expense of close ties with their arch-rival Iran. Ousted Sudanese President Omar al-Bashir deployed troops to Yemen in 2015 as part of a major foreign policy shift that saw Khartoum break its decades-old ties with Shiite Iran and join the Saudi-led coalition. Sudanese media reports claim that many of the Sudanese troops fighting in Yemen are from the Rapid Support Force (RSF) paramilitary group. Hundreds of Sudanese soldiers and officers are fighting in Yemen and have suffered casualties, raising calls for a withdrawal.

Regarding the transition period that country is going through currently, Suleiman said that they are trying to make it as transparent as possible while the opposition coalition, called the Forces for Freedom and Change (FFC), muddies the waters.

"They [opposition coalition] want for themselves to be the only ones who rule as part of the transitional government," he said, unlike what the majority of the political parties want, which is to have a transitional government that represents every segment of the country. In Suleiman's opinion, despite being the minority, the opposition coalition has the higher voices because it has control over media and the support of international actors such as the U.S. and EU.

"What should the transitional government do," Suleiman asked. "That's what we are disputing right now," he added.

In April, the Sudanese army ousted longtime President al-Bashir following months of popular protests against his rule. Although still struggling to form a stable order, the army established a military council to run the country for a transitional period of two years.

"The military was the only credible solution until the formation of a transitional government after the overthrow of al-Bashir. However, their period should not last more than a year," he said regarding the ongoing process.

Negotiations only way to reach consensus

When he was asked what is the solution to end this political instability in the country, Suleiman answered with one simple word: Negotiations.

"Sudanese people are very smart people. They eventually would realize that they need to come to terms with each other. I know this because since independence, we've been in similar situations more than once. However, people learn from their experiences so history should not repeat itself in the future," he said, adding that in his opinion, if this process continues for a longer time, instability and chaos will last as well. "That's why we need to reach consensus," he expressed.

Emphasizing that the Sudanese are the ultimate victims of this political situation, Suleiman said that all these ongoing disputes have caused the country to fail in having a stable economy despite being blessed with many resources.

"The problem is not the Sudanese people. The problem is the elites. They are selfish and do not think about anyone but themselves," he said.

Yet, in spite of all these developments, Suleiman is still hopeful for the future of Sudan.

"Sudan has a great opportunity right now to build a free and fair political system and fruitful international relations," he said.