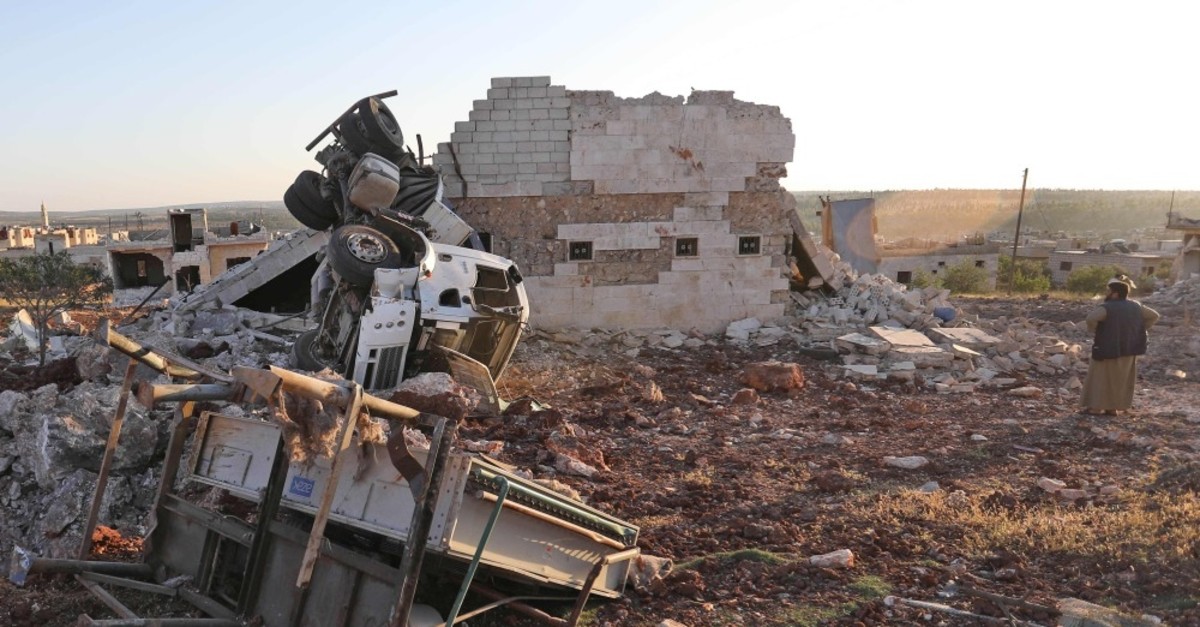 A man looks at rubble and damaged vehicles after reported airstrikes by the Syrian regime in the town of Kafranbel in Idlib province, June 28, 2019.
by Daily Sabah with Agencies Jul 04, 2019 12:34 am

Following eight months of relative calm provided by the Sochi deal between Turkey and Russia, the Syrian regime intensified its attacks as of April 26, under the pretext of fighting Hayat Tahrir al-Sham (HTS) militants holed up in Idlib.

Since late April, relentless bombardment by the Bashar Assad regime and its ally Russia has so far killed nearly 500 civilians. The violence has forced around 330,000 people to flee their homes and has damaged 23 health centers, the U.N. said. The regime has also targeted the Turkish observation posts in Idlib, established under the Astana agreement between Turkey, Russia and Iran. Turkish officials said after attacks that the military will retaliate if the attacks continue. In a recent statement, Turkey's permanent U.N. representative Sadık Arslan said Tuesday that Turkey will not hesitate to retaliate in case of any further attacks on the observation posts. Speaking at the 41st session of the U.N. Human Rights Council, Arslan added that fighting against terrorism does not legitimate indiscriminate attacks on civilians. He said hundreds of people have been killed in the recent Assad regime offensives.

Idlib is the last opposition enclave in Syria. Its pre-war population of 1.5 million has swelled to around 3 million, with new refugee waves after it was designated a "de-escalation zone" under the Astana agreement between Turkey, Russia and Iran in May 2017. The agreement would pave the way for a permanent political solution in Syria.

Twenty-two truckloads of humanitarian assistance were sent by the United Nations to Idlib, where the humanitarian situation has worsened in recent months. The trucks passed from the Cilvegözü gate at Turkey's border district of Reyhanlı. The humanitarian aid will be distributed to those in need in Idlib and its outskirts.

Top officials from the U.N. have been warning that a humanitarian disaster is unfolding in Syria's last opposition-held territory where Assad forces have indiscriminately targeted civilian areas by violating a cease-fire negotiated by Turkey and Russia in September. The Assad regime's military campaign, ongoing since April, has already started to aggravate the humanitarian situation. Hundreds of thousands of people fled from Idlib to camps near the Turkish border. According to U.N. figures, around 6 million people have been displaced internally and another 5 million were driven abroad as refugees since the beginning of the civil war.

Moscow concerned by US efforts on 'quasi-state' in Syria

Russian Foreign Minister Sergei Lavrov said yesterday that Russia is very concerned that the United States is speculating on the issues of the Kurds in Syria and are trying to set up a "quasi-state on the east bank of the Euphrates."

Speaking at a press conference, Lavrov also added: "There is already information about the quite serious clashes between the Kurds and the Arab tribes and we are concerned by that. We hope that the United States will refrain from actions that violate the U.N. Security Council resolutions and interests of all confessional groups living in the territory of Syria."