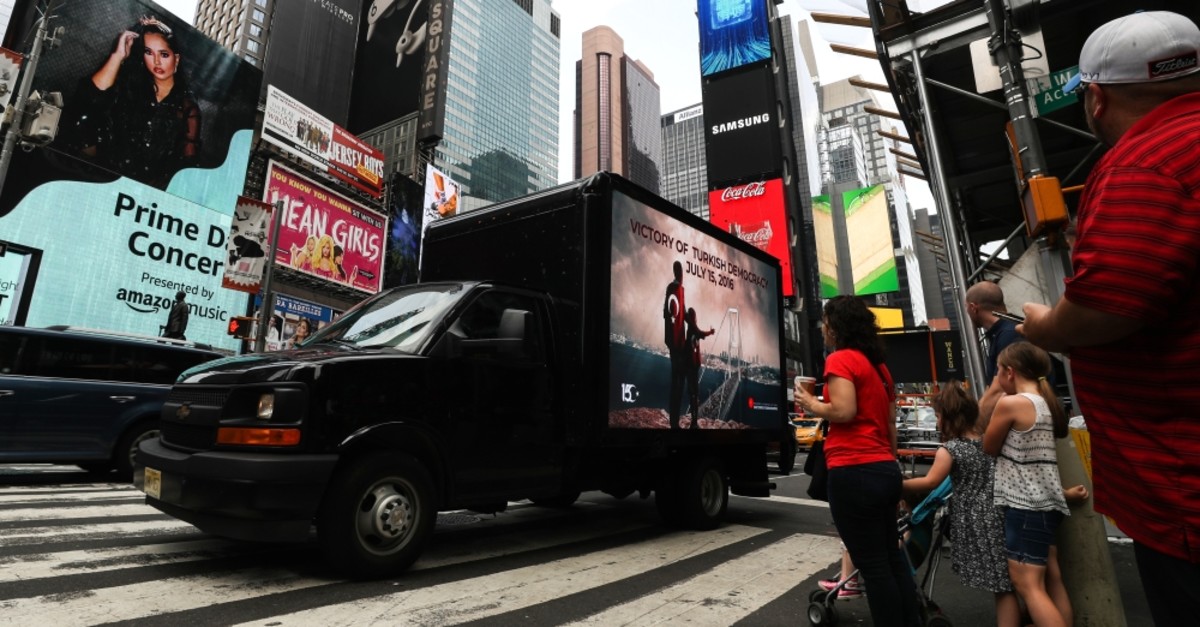 A van made its way through Manhattan on Wednesday providing the droves of passersby a window into Turkey's defeated July 15 coup attempt ahead of its three-year anniversary next week. The campaign was organized by the Turkish American National Steering Committee (TASC), with the organization fitting large screens on the sides of the van displaying images and information about the attempt for bystanders in Times Square to see.The screens also aired a trailer from a documentary called "The Network," which was prepared by Turkey's international news channel, TRT World in cooperation with the Turkish Presidential Communications Director's office.

The film analyzes the secret structures of the Gülenist Terror Group (FETÖ), its leader Fetullah Gülen and why Turkey is demanding his extradition so he can be held accountable for his role in the defeated coup attempt that killed 251 people and injured nearly 2,200.

The terrorist group is also accused of using its infiltrators in the police and the judiciary to launch two other coup attempts on Dec. 17 and Dec. 25 in 2013, under the guise of graft probes. The group had also launched sham trials against its adversaries using trumped-up charges and illegal or fake evidence. The U.S. remains the main hub of FETÖ activity where the shadowy group operates hundreds of charter schools and affiliated companies, providing visa and employment opportunities for thousands of its followers. Gülen has lived in self-imposed exile in a secluded compound in the U.S. state of Pennsylvania since 1999.

The terrorist group operates 140 charter schools in 26 states in the U.S, which were opened in the late 1990s and at the beginning of the 2000s, some of which have changed names over time. Around 60,000 students attend the schools annually.

These FETÖ schools are usually under the umbrella organizations and managed through foundations. For instance, 46 of its schools are named "Harmony" in Texas, 30 schools named "Concept" are in and around Ohio, while some others are called "Magnolia." Speaking to Anadolu Agency, TASC Co-chair Halil Mutlu said this year marked the third anniversary of the coup attempt repelled by the heroic Turkish people.

"In order to reveal the truth of this treacherous attempt and FETÖ's real face to the Americans, we are taking a van with digital display panels in Times Square," he said.

"Tomorrow, there will be a display of 'The Network' film. We hope that the images on this van will contribute to remind people what happened on the night of July 15," Mutlu added.