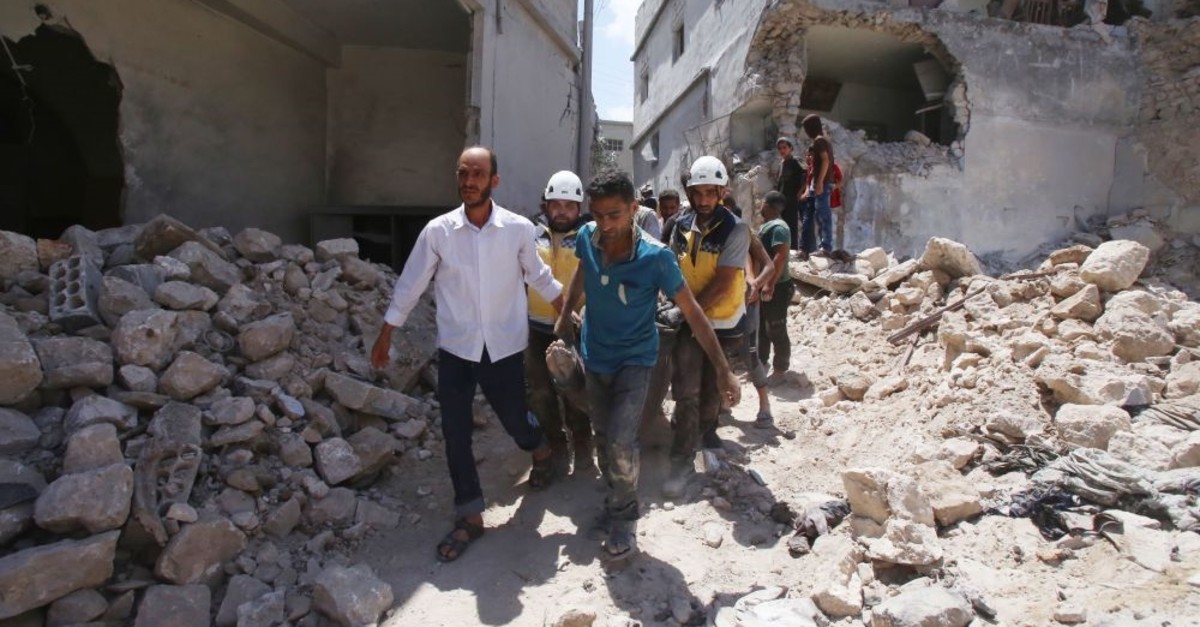 Members of the Syrian Civil Defence (White Helmets) and civilians carry a wounded man following a reported regime airstrike in the southern outskirts of Idlib province, July 12, 2019.
by Daily Sabah with Agencies Jul 13, 2019 12:15 am

International organizations, including the U.N., reiterated their call on the Bashar Assad regime and its supporters to cease airstrikes on civilian areas and health facilitates in northwestern Syria's Idlib amid a mounting civilian toll.

An ambulance center, a clinic and two hospitals, including one in Idlib's Maarat al-Numan district, were among the largest in the area that were attacked Wednesday, according to the Union of Medical Care and Relief Organizations, a Syrian doctors group.

"Civilians and civilian infrastructure, including medical facilities, must be protected," said Guterres in a statement released by his spokesman.

"The United Nations had shared the coordinates of the hospital in Maarat al-Numan with the warring parties," the statement said.

Meanwhile, at least eight civilians were killed and 35 others injured in fresh regime attacks on de-escalation zones in northwestern Syria, said sources from the White Helmets civil defense agency on Friday.

Regime forces launched airstrikes on Idlib's city center and the towns of Khan Shaykhun and Ma'arat al-Nu'man, the sources added.

Turkey and Russia inked a deal in Sochi for a buffer zone in September to prevent a massive regime offensive on the Idlib region near the Turkish border. Following eight months of calm provided by the Sochi deal, the Assad regime intensified its attacks starting April 26 under the pretext of fighting Hayat Tahrir al-Sham (HTS) militants holed up in Idlib.

Despite the de-escalation agreement, the Assad regime's intermittent attacks and bombardment have killed, wounded and displaced thousands of people in Idlib. Residential areas have been destroyed by indiscriminate attacks, while numerous educational facilities, health facilities and residential areas have collapsed or have become unusable after being targeted by bombs.

"Parties to the conflict must respect their obligations under international humanitarian law," Guterres said, adding that those behind the attacks must be held accountable.

The Syrian Network for Human Rights announced that 606 civilians have been killed in Idlib, including 157 children and 111 women, since April 26 by airstrikes of the regime and Russia. Also, 87 schools, 62 places of worship, 43 health centers and 30 civil defense centers were targeted in airstrikes.

Last month, U.N. humanitarian Mark Lowcock told the U.N. Security Council that a humanitarian disaster was unfolding in Idlib, noting that estimated 330,000 people have been forced to flee their homes, and hundreds of civilians have died since regime troops began pushing into Idlib in late April. He added that the World Health Organization (WHO) has confirmed that 26 healthcare facilities in northwestern Syria have been attacked since late April and stressed that attacking civilians and civilian installations like hospitals and schools is a violation of international law.

While the regime violates the Sochi agreement with ongoing attacks in Idlib, the meetings between Turkey and Russia to find a political solution continue. The Turkish Foreign Ministry announced on Twitter Thursday that Deputy Foreign Minister Sedat Önal had a meeting on Syria with Russian Special Presidential Envoy for Syria Alexander Lavrentyev and Russian Deputy Foreign Minister Sergey Vershinin in Ankara. Russian Foreign Ministry spokeswoman Maria Zakharova said Thursday in a press conference that she expects the visit of the U.N. special envoy for Syria to Damascus will boost the process of establishing the Syrian constitutional committee.

"On the political track, significant progress toward the completion of the formation and launch of the constitutional committee has been made... We expect the visit of the U.N. special envoy to Damascus, scheduled for this week, will accelerate the convening of the committee," Zakharova said.

The formation of the committee, the ministry spokeswoman said, will make it possible to launch a direct dialogue between Syrians to determine the parameters of the final settlement of the Syrian crisis and the future of the country.

U.N. special envoy for Syria Geir O. Pedersen said Wednesday that the negotiations between the sides of the Syrian civil war are getting closer to reaching an agreement to establish a constitutional committee in line with U.N. resolution 2254.

"Looking forward to discussions w/ the SNC shortly," Pedersen said on Twitter, referring to Syrian opposition's Syrian Negotiation Commission (SNC), after his discussions with officials from the regime in Damascus.