Three years on, July 15 continues to be etched in people's memory 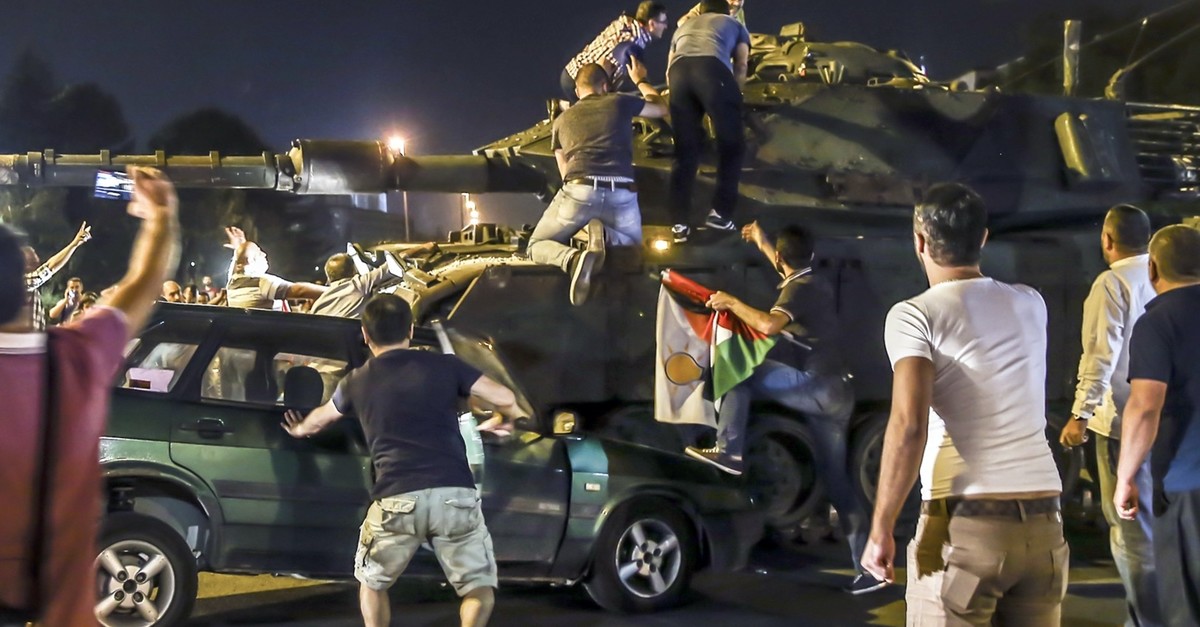 The coup attempt has its place within the Turkish people's minds as one of the most catastrophic days for the country, with some even defining it as an 'apocalypse'

There is no doubt that the bloody coup attempt of July 15, 2016, has marked its place in Turkey's recent history as one of the, and maybe the most, significant challenges that the republic has faced. The official numbers on the night and its aftermath alone show 251 civilians killed during the coup attempt and thousands charged afterwards for having links to the terrorist group behind it, the Gülenist Terror Group (FETÖ), tell the importance of this night in the republic's saga. The real story of July 15, however, lies in average people's memories, especially the youth, who still recall the shocking development of the events and define the day as the "apocalypse of the country." "I remember every detail of that day," said 35-year-old Mehmet, who recalled having an ordinary evening with his friends in Taksim, the heart of Istanbul.

"Normally in Taksim, there would be some security forces present. However, I realized that day there were none, which seemed suspicious to both me and my friends. Yet, we assumed that there was some kind of a bomb call or something like that," said Mehmet, adding that he did not pay much attention to this at the time. However, Mehmet's peaceful night did not last long as a friend called and informed him that there was a coup attempt. "At that point, I screamed. 'What? A coup? In this century?'" Mehmet cried again, with enthusiasm, remembering those moments. Mehmet's shock was actually a very common feeling, especially among the younger generations of the country, as others also expressed similar feelings while recalling the dark day.

"When I first heard that there was a coup, I was in shock. I suddenly felt very helpless. In a million years I never would've guessed that such a thing would occur," said 25-year-old Neslişah. "Yet," she said, "It did really happen." Despite the surprise of the youth, Turkey is actually not a stranger to coups as there have been four of them, starting in 1960. However, the latest one took place in 1997, when Mehmet was only a child and Neslişah was just three years old. It also had a different pattern than its predecessors and was called a "post-modern coup" as it did not have soldiers walking around and taking control over places. Instead, the coup took place via a series of "recommendations" from the military to the era's government. When the 1990s were left behind, however, things seemed quite smooth, especially after the rise of the ruling Justice and Development Party (AK Party), which created an atmosphere that seemed to insure the elimination of coups from the country's politics in people's minds. Thus, when the July 15 came, and it was revealed that this was truly a coup attempt, the waves of shock spread all around the country very quickly.

"When I finally realized that this was really a coup, I decided to go home. On my way, I crossed paths with some local tourists, who were hitchhiking and scared. I welcomed them into my car. However, soon after, the coup plotter soldiers stopped me and did not allow me to go on. So I had to continue on foot," said Mehmet. For Mehmet, the next couple of days became full off sadness, surprise and complexity. The very next day after the coup, he had to attend a funeral of his neighbor, who was killed during the coup attempt, and then leave his shock behind and start to participate in public occupations of squares that lasted for a while after the coup attempt as a signifier of the people's victory.

'IT WAS LIKE A PAUSE TO NORMAL FLOW OF LIFE'

"If things had not gone as before, my life would have crashed. For a moment, I felt very threatened," he said, recalling his feelings.

In Neslişah's opinion, the day was like dealing a big blow to the normal flow of time and pausing it somehow.

"I thought that my future was taken away from me," she said. Remembering the day after the coup attempt, Neslişah said that she had never seen people in Istanbul in that way.

"I was staying with a relative so I had to leave the house to go home. However, I felt very nervous and couldn't make myself leave the house. And when I finally stepped outside, I remember seeing blankness in people's eyes, a reflection of something unforgettable that just happened. I remember seeing tanks everywhere and feeling chills all over my body," she asserted with a trembling voice.

According to Kaan (26), the day was like the "apocalypse of the country." Indicating that he felt nervous at first, Kaan said that when he saw President Recep Tayyip Erdoğan calling on people on TV, he felt relaxed and confident. "I thought that they are [the government] doing something about it. I found it [the president's speech] very effective," he said.

"I stayed up all night. I felt concern for my future and my loved ones, who might have been in danger at that time," Kaan said, adding that it had only been a month since he started his first job when all this took place. "I questioned if I'd be able to go to work on Monday. I thought 'what the hell, is this my luck or what'?" he asked, underlining that he felt very unfortunate and desperate for awhile.

The thing that gave Kaan his self-confidence and trust that there will not be coups no more, however, was the discharging of groups and people from public offices that might have caused such a threat.