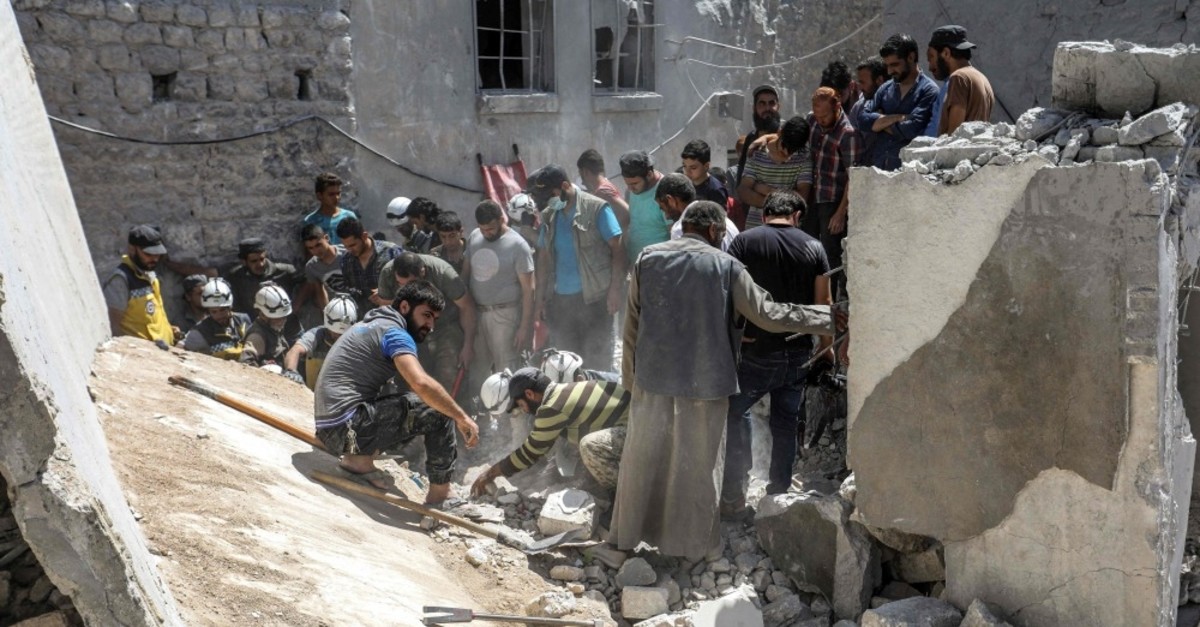 Members of the Syrian Civil Defence (White Helmets) search for bodies and survivors in a collapsed building following a reported regime airstrike, south of Syria's Idlib province, July 12, 2019.
by Daily Sabah with Agencies Jul 17, 2019 12:13 am

The Bashar Assad regime's constant violation of human rights has led to new humanitarian tragedies and sparked protests in the international community. The story of Saihe Nedim Barudi, a Syrian woman diagnosed with cancer who was tortured for over three months in the regime's prisons, is still fresh in the memory of her friends. Barudi, 55, died in February, almost five years after she was arrested by regime forces in the western Hama province on charges of aiding Syrian dissidents.

"She did not suffer from any health problems before her arrest," Haitham Ahmed Hussein, Barudi's colleague, told Anadolu Agency (AA). He said Barudi was in the last phase of cancer when she learned about the disease. "Doctors assessed that her illness had manifested when she was in prison," Hussein said. Recalling the torture of the Syrian woman in regime prisons, Hussein said Barudi could not forget the moment she was kicked in the face by prison guards.

"She used to tell us that they had to drink urine, eat moldy food and were hung out in freezing weather," Hussein said.

According to Hussein, Barudi was arrested in 2014 and tortured in 14 different interrogation centers for more than two months. "It was then when she came down with cancer," he said.

Devoting herself after her release to working with former female prisoners who shared the same fate in regime prisons, Barudi used to provide financial aid to them. "She was a very tactful and true-hearted person," said Hussein, who also worked with Barudi in voluntary projects for three years.

The international community also urged the Assad regime to stop the collective punishment of innocent civilians in Syria.

New York-based Human Rights Watch (HRW) called on the Syrian regime yesterday to stop the collective punishment of people who were placed "arbitrarily" on a terror list by freezing their assets.

"The government should end the collective punishment of families, provide evidence of unlawful activity of the people targeted and allow them to appeal their listing or unfreeze their assets," the watchdog said.

Decree 63 gives full power to the Finance Ministry to freeze the assets of people pending investigation of their crimes as suspected terrorists under Syria's counterterrorism law of 2012, even if they have not been charged a crime, according to HRW.

Syrian refugees who fled the war eight years ago to neighboring countries like Turkey, Jordan and Lebanon are usually afraid to return because of such decrees and the punishment they might face from the Assad government.

According to HRW, people affected by the decree had not been notified and only became aware their assets had been frozen or seized when they attempted to conduct a transaction involving their property.

"As with other legal instruments, Syria is using Decree 63 to authorize abusive and arbitrary practices that rob people of their very livelihoods," Fakih said.

Meanwhile, at least nine more civilians were killed, and 14 others injured in fresh regime airstrikes in the de-escalation zones in northwestern Syria Tuesday.

The attacks targeted the residential areas in towns of Jisr al-Shughur, Khan Shaykhun, Maar Shoreen, Hantoteen and Ain Al Bardeh in Idlib province, according to an AA correspondent on the ground.

Idlib, the last opposition enclave in Syria, had a prewar population of 1.5 million that swelled to around 3 million with new refugee waves after it was designated a de-escalation zone under the Astana agreement between Turkey, Russia and Iran in May 2017 to pave the way for a permanent political solution in Syria.

The Sochi agreement was reached in September between Ankara and Moscow, envisaging the preservation of the cease-fire in Idlib, with the withdrawal of heavy arms and radical groups from the region. Following eight months of calm provided by the Sochi deal, the Assad regime intensified its attacks starting on April 26 under the pretext of fighting Hayat Tahrir al-Sham (HTS) militants holed up in Idlib.

The Assad regime's attacks on Idlib are also prompting fears of a new refugee wave, as international organizations have warned against a humanitarian crisis. The offensive has displaced over 330,000 within the opposition-held area and killed hundreds, including medical staff. Civilian areas have been destroyed by indiscriminate attacks, while numerous educational facilities, health facilities and residential areas have collapsed or have become unusable after being targeted by bombs since regime troops began pushing into Idlib on April 30.

Aid agencies say the scale of bombardment in the northwest risks further humanitarian disaster, and hundreds of thousands of people have already fled toward the Turkish border. The World Health Organization (WHO) has confirmed that 26 health care facilities in northwestern Syria have been attacked since late April and stressed that attacking civilians and civilian installations like hospitals and schools is a violation of international law.