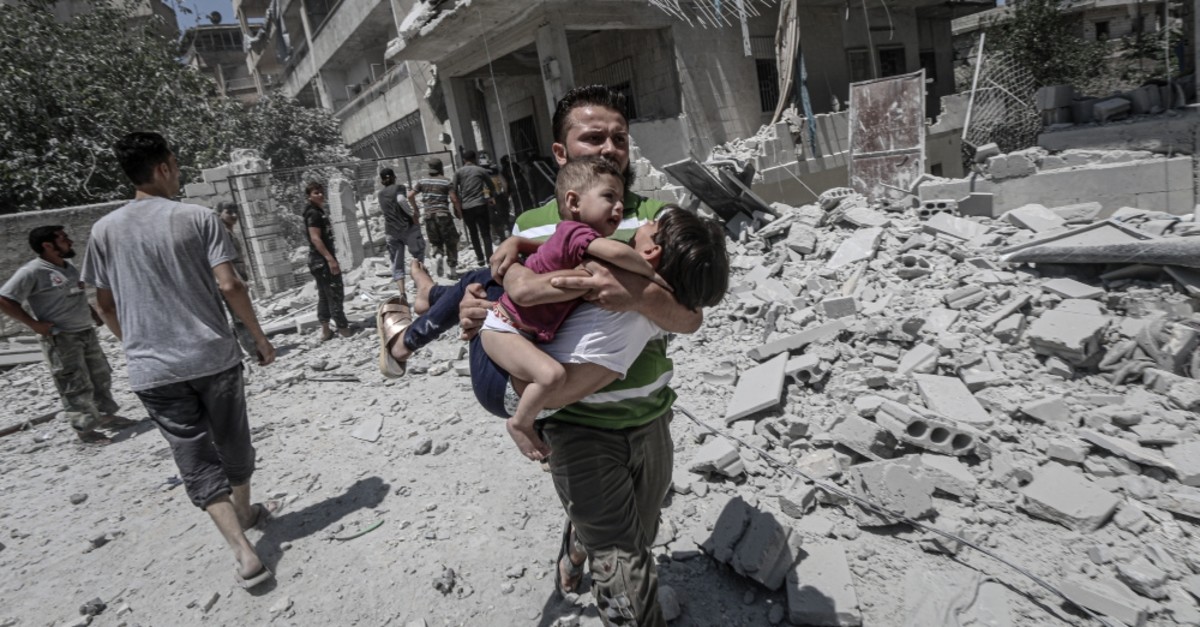 Northwestern Syria's Idlib has witnessed the deadliest month for children, surpassing the death toll for all of 2018, according to an international monitor. The international organization Save the Children declared that at least 90 children have been killed in the Idlib and Hama provinces within the Idlib de-escalation zone since April. "Thirty-three children have been killed since June 24, compared to 31 children killed during all of 2018," the monitor said. "The children of northwest Syria have been caught in violent conflict for 80 days with no lull. They have been denied education, food, health care and forced to sleep under the trees in open fields for months now," Sonia Khush, Save the Children Syria Response's director, said.

"The current situation in Idlib is a nightmare. Theinjuries we are seeing are horrific. It's clear that once again children have been killed and injured in indiscriminate attacks."

Also, international child protection organization UNICEF reported that at least 140 children were killed in northwest Syria since the beginning of this year.

Turkey, Russia and Iran declared Idlib and its surroundings as a de-escalation zone at the Astana meeting in May 2017. Amid the ongoing cease-fire violations by the regime, Turkey and Russia reached a further agreement in Sochi in 2018.

Following eight months of relative calm provided by the deal, the Syrian regime intensified its attacks on April 26 under the pretext of fighting Hayat Tahrir al-Sham (HTS) militants holed up in Idlib.

Together with Iran-backed terrorist groups and the Russian Air Force, the Bashar Assad regime has started to gain power in the region with far-reaching attacks on the Idlib de-escalation zone.

UNICEF Middle East and North Africa Regional Director Geert Cappelaere stated that eight water facilities in the Al-Ma'ra district in southern Idlib came under attack last week, affecting the water supply of nearly 250,000 people. "Among these facilities is the main water station in the Maaret An-Numan area. It was severely damaged, forcing families to rely on water trucking for their daily needs," he said.

Amid continuous bombardment, locals in northwestern Syria's al-Bab and Azaz districts protested the intense airstrikes by the Assad regime and Russia in Idlib, calling for the protection of civilians. The two districts are important crossroads and the settlement in northeastern Aleppo province was liberated from the cruel four-year period of Daesh rule on Feb. 22, 2017, by the Turkish Armed Forces (TSK) and Free Syrian Army (FSA) fighters. The area was liberated as part of Operation Euphrates Shield launched on Aug. 24, 2016, to clear the terrorist group from Turkey's border regions.

However, despite all the tragedy that has been going on in the region since the Syrian civil war led by Assad erupted in 2011, Russia and the regime's heavy bombardments and attacks on the de-escalation zone continue. On Friday, once again, a marketplace in the Seraqib province was attacked with airstrikes by the regime, resulting in the deaths of two civilians and wounding eight.

According to opposition forces, the Assad regime carried out airstrikes on several regions and villages starting in the morning; thus, the number of deaths since the beginning of the week rose to 81.

The opposition has controlled Idlib since March 2015, which is of strategic value for the regime forces and therefore the conflict has become a geopolitical battleground with Russia, the United States, Iran, Turkey and several nations all involved and backing various forces. Even though Russia and Turkey reached an agreement for a cease-fire in Astana and Sochi, the deal has faltered in recent months, forcing hundreds of thousands of civilians to flee. The U.N. says that more than 440,000 people were displaced just in northwest Syria in the past three months.

The Syrian Network for Human Rights (SNHR) announced that the attacks of Assad and his supporters on the de-escalation zone between the dates April 26 and July 12 led to the death of 606 civilians, 157 of which are children and 111 women.

What is more, if the total number of deaths is considered since the outbreak of the war, data of the SNHR shows that 28,486 children were killed in attacks from 2011 to 2019.

"These are civilian objects, and it seems highly unlikely, given the persistent pattern of such attacks, that they are all being hit by accident," U.N. High Commissioner for Human Rights Michelle Bachelet said on Friday, adding that the rising toll had been met with "apparent international indifference."

She added that in the last 10 days alone at least 103 civilians, including 26 children, were killed.

Being the last opposition enclave, Idlib's prewar population of 1.5 million has swelled to around 3 million with new refugee waves after it was designated a de-escalation zone under the Astana agreement. Tens of thousands of Syrians trapped in other parts of the country were evacuated there under various cease-fire agreements.