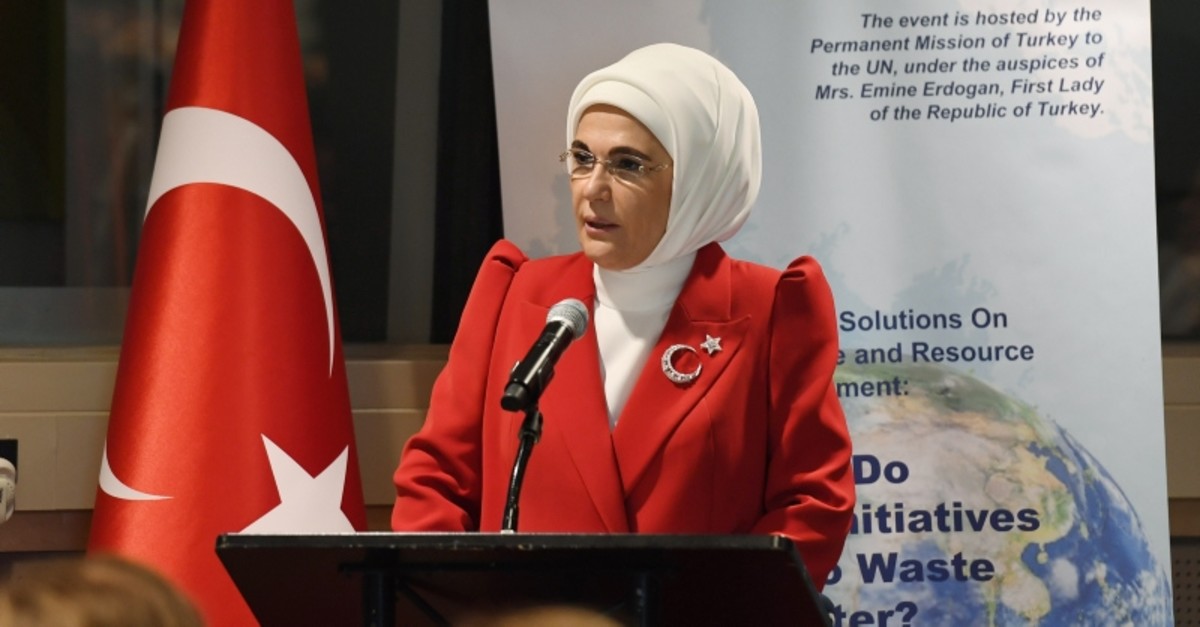 | AA Photo
by Anadolu Agency Sep 26, 2019 12:33 am
First lady Emine Erdoğan presented a national Zero Waste Project at a panel on recycling Wednesday on the sidelines of the 74th U.N. General Assembly, saying the world is going through a "plastic era."

A sustainable life is possible with the protection of soil, water, the climate and biodiversity, Erdoğan said, noting that the problem affects not only the present but also future generations.

"Plastic has already become part of the water that we drink, the air that we breathe," she said, referring to recent studies conducted in Colorado and France.

Saying that this plastic waste is split into micro parts during its journey in water due to salty ocean water and heavy waves, Erdoğan noted that even on the beaches where there is no human settlement there is plastic waste.

"It has been found that micro-plastics can travel 100 kilometers in the air with the wind. This is far beyond urban pollution. Plastics thrown from one end of the world can travel to completely different places. The environmental crisis is a very strong cause for alarm," she warned.

"What we call the environmental crisis is ultimately the price of our way of life, our modes of production, that is, the essence of this world order based on consumption," she said. "In 2017, to reverse the effects of these costs, we launched the Zero Waste movement in Turkey."

The first lady praised the efforts of the Turkish Environment and Urban Planning Ministry, saying the Zero Waste movement has spread rapidly throughout the country.

"Especially in schools, activities that will enable children to gain environmental awareness have been held successfully," Erdoğan added.

She also said the Zero Waste Blue Project was launched in Turkey three months ago for waste-free seas.

"We, as a country, are open to all the children of the world, for all kinds of cooperation in building a livable future," she said.

"I think that all the borders between the countries should be lifted in order to overcome the environmental crisis," said Erdoğan, calling on international community, adding Turkey is open to all kinds of cooperation to build a livable future for the children of the world.

"I find it urgent to prepare a new international convention on marine litter and micro-plastics. It is time to think about it, not talk or prepare reports, but take action," she concluded.